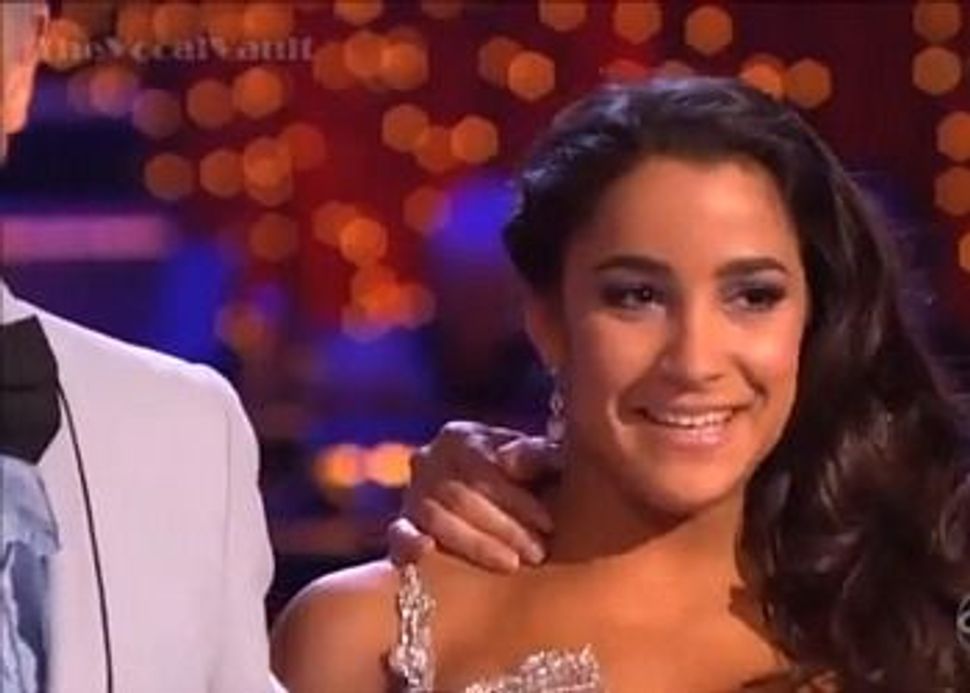 Aly Raisman on ?Dancing With the Stars?

This week, Aly and her pro partner Mark Ballas danced the Viennese waltz. This is one of my favorite ballroom dances, because it involves a lot of fluid motions and dancing in hold — that is, connected to each other rather than breaking apart and doing parallel moves. I was nervous about how Aly might do with such a fluid dance, considering that what won her a gold medal for floor exercise was her tumbling, not her grace.

Luckily, once the Cupid was gone, Aly and Mark segued into a pretty Viennese waltz, which you can watch below. There were a few minor issues with their hands syncing up, but overall I thought she did really well. The judges agreed, giving her a respectable 23 (out of a possible 30) points. Judge Carrie Ann Inaba did make a good point in her critique of Aly, though, which is that she needed to work on staying in character. As much as this show is about dancing, it’s also about performing and “selling” the dance, and many celebrities struggle with this, especially ones like Aly who don’t have an acting background. Still, considering that some of the other celebrities on this show (cough cough D.L. Hughley) can’t even get their feet to go to the right places, Aly is doing just fine.

When it came time for eliminations, Aly was nowhere near being in danger. Instead, it was Wynonna Judd who headed home — kind of a surprise, considering how well-known she is and how much of a fanbase she has, but not undeserved based on her stiff dancing. The other celebrities at the bottom of the heap were comedian Andy Dick and Real Housewife Lisa Vanderpump, so it looks like Aly should be able to coast by for at least a few more weeks until the competition gets really tough.