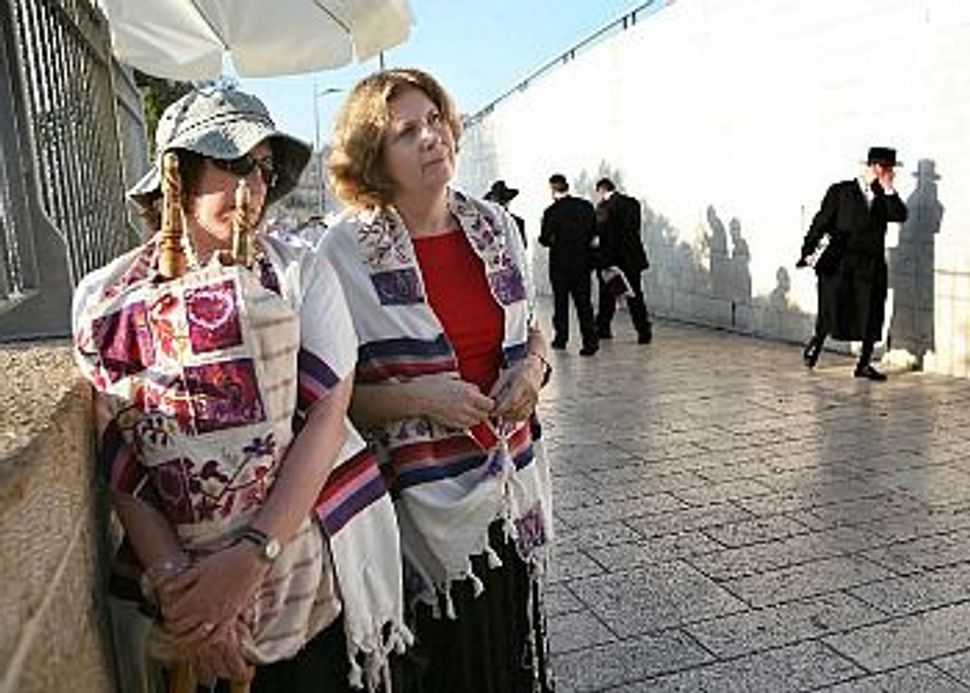 Anat Hoffman and another member of Women of the Wall stand at the entrance to the Kotel as Haredi men look away. Image by Wikimedia

Add Kaddish to the list of Jewish prayers and ritual objects women are not allowed to be engaged with at the Western Wall, according to the commander of the Jerusalem police.

In a March 14 letter to Anat Hoffman, chair of Women of the Wall, Yossi Pariente wrote that he met with a deputy attorney general for the government of Israel to go over the rules pertaining to Women of the Wall, which include prohibitions on:

…Wrapping yourselves in tallitot [prayer shawls], holding a minyan [prayer quorum] of women including the Kaddish or Kedusha prayers, and reading from the Torah.

Pariente warns that, starting on the next Rosh Chodesh, which falls on April 11, Women of the Wall will be arrested and charged with breaking the law for doing any of these things.

We would like to inform you that, starting on this coming Rosh Chodesh, the Israel Police will fulfill its duty to enforce the law.

The police chief’s new threat “is an overreach. It’s chutzpah, unbelievable chutzpah,” Hoffman said in an exclusive interview with The Sisterhood.

The Kaddish and Kedushah prayers have never before been among the acts viewed as law-breaking by Jerusalem police, nor have they ever led to the arrest of members of the group, Hoffman said.

These newly prohibited acts are also not listed in the most recent ruling by Israel’s High Court, from June 2003, which said that Women of the Wall has the legal right to pray at the Kotel “according to their custom,” but with limitations, one being that they should pray at the nearby Robinson’s Arch, and that the government was obligated to make the archeological site fit for prayer within a year. That has not yet happened.

Women of the Wall members, after saying preliminary prayers in the women’s section of the Kotel, have for nearly the past decade gone to the Robinson’s Arch area anyway in order to read from a Torah scroll.

That has come to an end now, said Hoffman. The organization has decided that it is preferable to read from a chumash, or Five Books of Moses in book form at the Kotel itself than to read from a sefer Torah at an ancillary site.

“Women of the Wall are not going to be banished to a separate space, because we don’t think separate is equal. We want to be with the rest of the Jews of the world at the Western Wall, and pray halachically [according to Jewish law] as we do,” she said.

The police chief’s decision is “also unenforceable,” she said. “Half of the police there [at the Kotel] aren’t even Jewish — they’re Israeli Arabs or Druzim. So how would you enforce the Kaddish rule exactly? And the ones who are Jewish, what a shameful thing to make the police do, to stop women from saying Kaddish. This is not what it’s supposed to be.”

Nevertheless, Women of the Wall members met as a group on April 2 to prepare for the possibility of being arrested and charged on April 11. “We’re taking it seriously,” said Hoffman.

Police have increasingly arrested Women of the Wall members during their prayers at the Kotel, most recently in February. Police backed down from arresting members at the last Rosh Chodesh service when they were informed that three of the women were members of Knesset, who have legal immunity. There was a Rosh Chodesh service in Manhattan in solidarity with Women of the Wall on March 13, which attracted some 350 people.

After detaining Women of the Wall members at the Kotel, sometimes for a few hours and occasionally overnight, police have generally released them after they have signed a statement agreeing not to return to the Kotel for a month or more.

Some 300 women participated in the last Rosh Chodesh service, Hoffman said, and she expects that many to attend on April 11th.