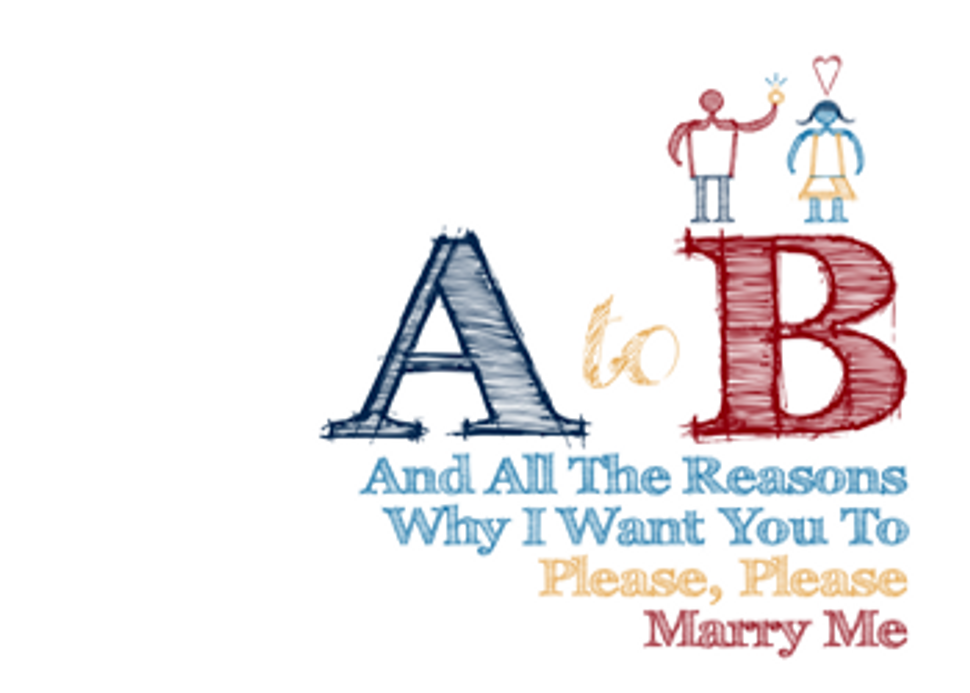 Brad Pilcher created an original children?s book to pop the question to his wife, Amy. Image by Courtesy of Brad Pilcher

Last week, I wrote a piece for TODAY.com about a man in Chicago named Jason Methner, whose incredibly elaborate proposal to his now-fiancee involved an original kids’ book and some collusion from the Chicago Public Library. While most of the comments on the article were positive, quite a few people were unhappy. However, it wasn’t the proposal itself they were angry about — it was the barrage of attention paid to the story, particularly on social media (the Chicago Library had requested permission to post photos of the proposal on its Facebook page, which helped the story go viral).

“It’s bad enough that this guy has to ruin marriage proposals for everyone else,” one guy fumed to me in a personal email, “but they’re just doing it for attention and you’re giving it to them.”

Now that Pinterest and Facebook have turned wedding planning into a competitive public sport, it seems only logical that marriage proposals would follow. It’s increasingly common for couples to have the moment itself photographed, leaving them with dozens of pictures of the man down on one knee and even more close-up shots of the ring.

“Proposals set the tone for the whole marriage,” said Pitlor. “If you spend that much money on the ring, you should have a good experience [proposing], because it’s always the first question people ask: ‘How did he do it?’”

Both Pitlor and Mavian admit that social media plays a role in their business. Ninety percent of clients have asked that a photographer or videographer be near the site of the proposal in order to get footage of the big moment. “Because people broadcast their lives on Facebook and Twitter and Vine, there’s a notion that everything that happens is going to be shared,” Mavian says. Though she won’t comment on whether any Blueprint-coordinated proposals have gone viral, she does admit that many people deliberately try to make videos or photos they think have a chance of being popular online. “People want the excitement of sharing and they want to hear others congratulating them,” she says.

But wanting praise isn’t the only reason that couples put their proposals online. Many, including Jason Methner, want a way to include out-of-town friends and family in the proposal. As young people move away from their hometowns to pursue careers in big cities, social media is a way to keep in touch and disseminate information more quickly. For Brad Pilcher, who is the assistant director for the Atlanta Jewish Film Festival, adding a social media component was key because it helped make his now-wife’s family, who don’t live in Atlanta, part of the big day.

Both Pilcher and Methner’s proposals were shared on social media by the venues where they popped the question, and that’s something else to consider in the wave of viral proposals: marketing departments love to use the videos as publicity vehicles. After all, which will get more YouTube views, a video of people reading quietly in a library or a video of a guy proposing to his girlfriend in a library? Considering how lucrative the wedding industry is for dress designers, florists and caterers, it’s no surprise that event spaces might want to brand themselves as perfect wedding-proposal venues. In fact, Pilcher hadn’t considered filming his proposal, which took place at Atlanta’s Center for Puppetry Arts, but said yes when the venue suggested it.

Though each proposal had a public component, there was also a more private, personal takeaway — in both cases, a custom-made kids’ book. Pilcher says that he wanted something permanent that his wife, the now-Amy Kolodny Pilcher, could look at during a nostalgic moment and eventually show to their future children. Methner echoed this sentiment. His fiancee Molly Lipsitz said that the book was “a parable of their relationship” and something she hoped to keep forever.

“I know I was inspired by the tradition in Jewish weddings of creating your own elements,” Pilcher says about the thinking behind his proposal. “I ended up designing the ketubah and the tenaim to match the book I gave her, and the website, and the invitations. It all matched, because I did it myself. I wanted to bring that same ethos to the engagement, to make something for her, literally. So the first gift was the book I gave her and the whole surprise of the proposal. And then it just sort of went all the way through. I worked with a friend to build this big chuppah. I’ve always liked that aspect of Jewish weddings.” For the record, Pilcher says that his video isn’t searchable on YouTube, and that it’s doubtful that anyone but friends, family, and Center for Puppetry Arts employees ever saw it. But it still lives online, where nothing can stay a secret forever.