Sassy Aly Moves Ahead on ‘DWTS’ 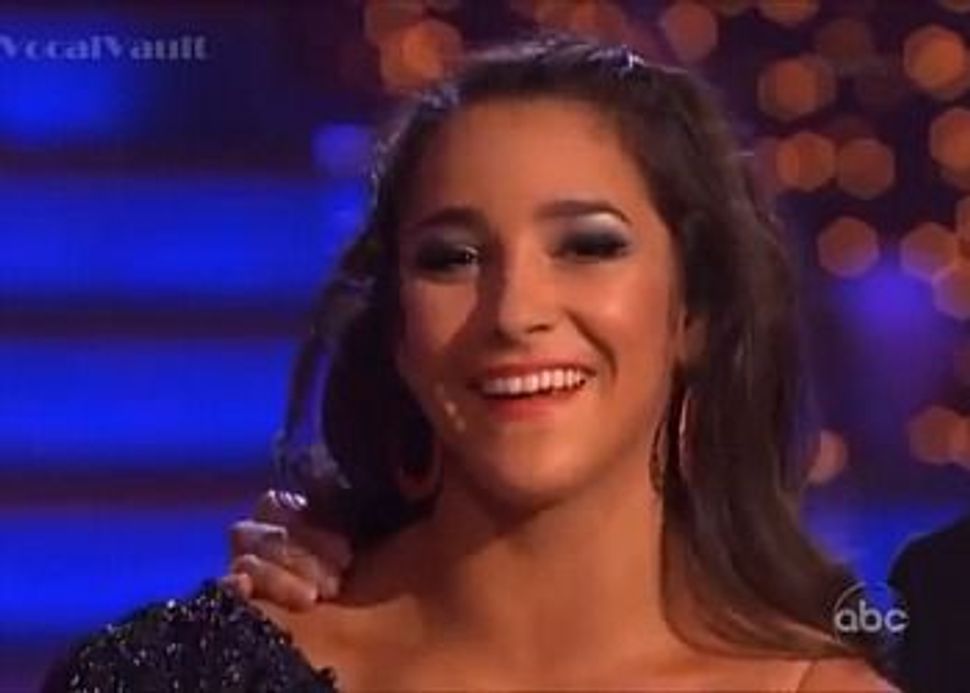 This week, Aly Raisman had the samba. The samba is a super-sexy Latin dance, and Aly admitted that she was having some trouble pulling it off. Considering that one of Aly’s “storylines” this season is that she’s tired of people viewing her as a little girl, having a sexy dance and executing it well could really help her stand out this week.

When it came time for the side-by-side dances, Aly and female pro Witney were apparently given two halves of the same dress. This is where I think the conceit of the episode failed Aly: On her own, she looks like a pretty competent newbie dancer, but forcing her to dance next to a slender, lithe pro dancer with insane hip movements is really unfair. My own personal dislike of Aly’s pro partner Mark Ballas — who likes to ham it up for the camera instead of letting the celebrity have the spotlight — also made it hard to love this dance, since his bright orange socks and over-the-top gestures were incredibly distracting.

At the end of Aly’s dance, another one of the show’s contradictions reared its ugly head. Aly dedicated her performance this week to the people of her hometown of Boston, which was a great gesture considering how much the city has been through in the aftermath of the Boston Marathon bombings. If her dance this week had been a soft waltz or romantic rumba, it would have seemed like a lovely homage. Instead, it was a weird juxtaposition of national tragedy and booty shaking. It’s not Aly’s fault, since the dances are assigned far in advance, but it made the whole thing a little bit squicky.

The judges were mostly positive about Aly’s performance, with Bruno Tonioli calling her “sassy” and acknowledging her energy. However, judge Carrie Ann Inaba felt like Aly’s dance suffered because Witney wasn’t there to make her competitive. Aly scored 25 out of a possible 30 points, behind current breakout star Zendaya (who nabbed the first two 10s of the season) but ahead of most of the other competitors, including soap star Ingo Rademacher and comedian Andy Dick. Ultimately, it was D.L. Hughley, popular with the crowd but a big miss with the judges, who packed up his dancing shoes this week.

Coming up next week: team dances!

Sassy Aly Moves Ahead on ‘DWTS’