Aly Dances for Boston on ‘DWTS’ 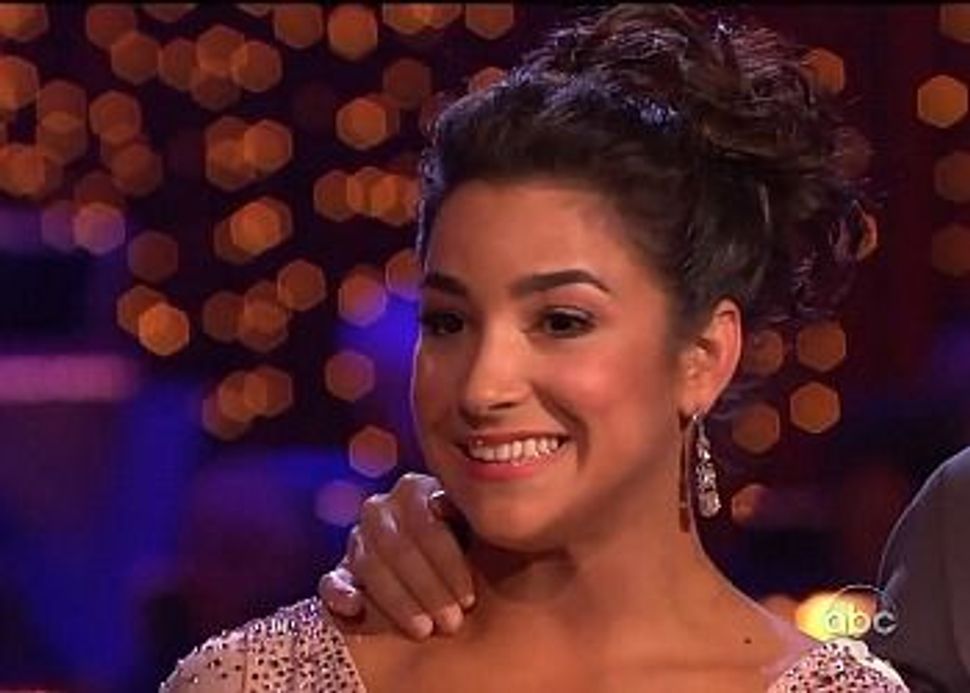 Aly Raisman on the latest episode of ?Dancing with the Stars?

Although it’s only six weeks into the season, it’s never too soon for the show to throw extra challenges at the celebrity dancers. This week, there was a “group dance” segment where the pairs had to dance together. That made two dances to train for in a minimal amount of time — although that’s still probably nothing compared to training for the Olympics.

“I think everything at the Boston Marathon has affected me a lot more than I thought,” a somber Aly said to the camera while wearing an “I [Heart] Boston” T-shirt. That’s not a good sign for her, since the foxtrot is one of those peppy, upbeat numbers that wouldn’t look out of place in a Fred Astaire movie. She then admits that not only is she affected because she grew up in Boston, but she was supposed to have been at the Marathon that day. Her pro partner, Mark Ballas, tells her that she should dedicate her dance to Boston and try to bring joy in order to heal. In other words, even if she falls on her face, no one is voting against Aly Raisman this week.

By the time we get to the actual foxtrot, it feels anticlimactic. Of course it’s terrible what happened at the Marathon, and I don’t blame Aly for being upset about it. However, a celebrity bringing up a sad news event on the show always makes it look like they’re trolling for sympathy votes, and Aly’s a good enough dancer that her talent should stand on its own. It’s also the second week in a row that she has dedicated her dance to Boston, although a perky foxtrot is probably a better choice than a sexy samba, which is what she had last week.

Head judge Len Goodman, who is always the toughest, told Aly to work on her frame. The comment makes sense, considering how different the gymnast and dancer poses are. Judge Bruno Tonioli praised Aly for her consistency, which was almost an insult, because this show loves people who have bad weeks and then huge comebacks rather than people like Aly who just work hard every week and don’t cause any drama. Judge Carrie Ann Inaba said that Aly was “understated” and showed her “Boston elegance,” whatever that means. Aly wound up with her best scores yet – a nine from each judge, for a total of 27 out of 30. That — and her fanbase — left her as the first celebrity called safe on Tuesday’s results show, with boxer Victor Ortiz getting the boot.

Aly Dances for Boston on ‘DWTS’