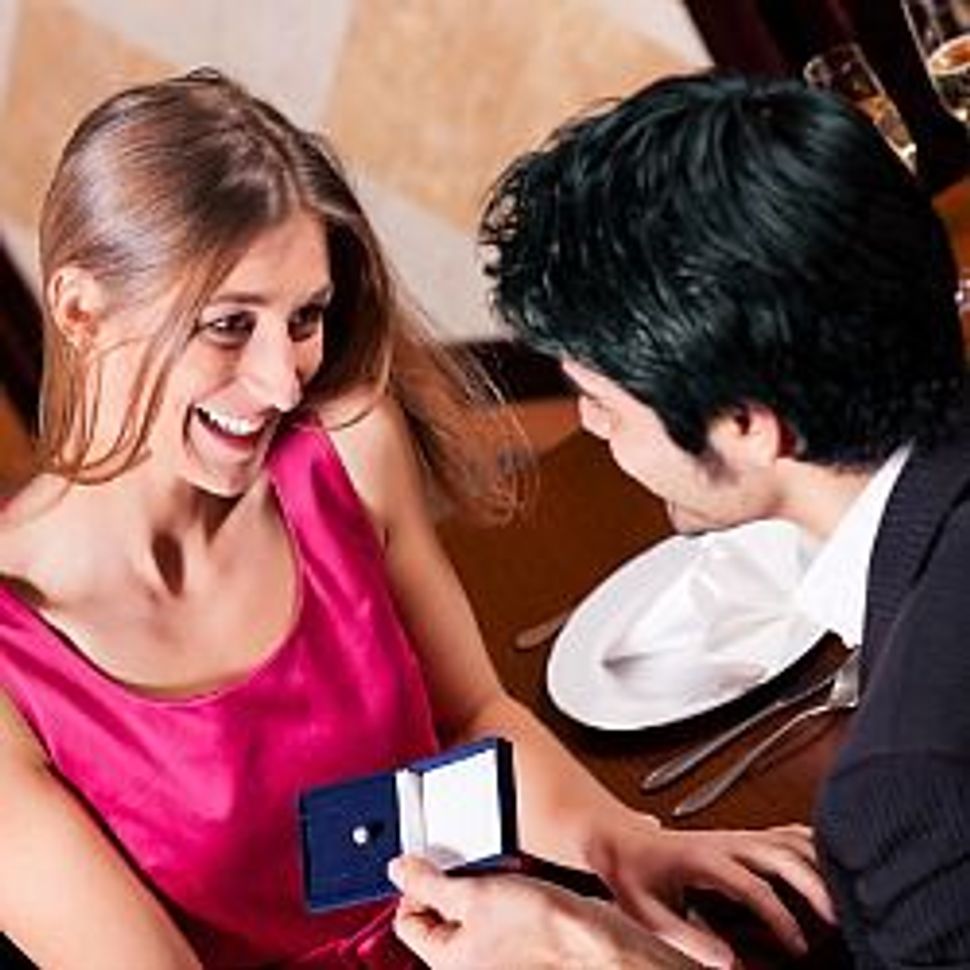 Why do men typically have all the power when it comes to proposing? Image by Thinkstock

Forget about the exorbitant price tags that come with many weddings these days. Try $45,000 for a marriage proposal.

That’s what ad agency exec Josh Ogle spent last year on an elaborate, scripted, national-media-attention-grabbing proposal to Nataliya Lavryshyn, which included a custom ring, a vintage car to whisk the couple away, and a Pulitzer-prize winning photographer to document the whole thing. (Lavryshyn said yes.)

“She would’ve said yes if I’d asked it while she was playing a video game,” Ogle wrote last month in a Reddit thread that generated no small degree of vitriol about how spendy he’d been. “I knew what her answer would be, I just wanted to ask it in a way that was creative, adventurous, fun, and memorable.”

Ogle was profiled in the New York Post in a story about the growing industry of proposal planners, who men hire to help them craft the kinds of creative, documented proposals that might go viral on YouTube (Ogle spent $3,500 on a planner).

Most of my friends don’t have the dough to shell out on proposals so exorbitant, but anecdotally (and also according to the Post), there’s a trend toward bigger and fancier proposals.

That trend should be in the other direction, away from the tradition of proposals entirely.

Increasingly, at least among my peers, couples are having frank discussions about what they want out of life and their relationships, and what they think about marriage, kids and property well before they get engaged or get pregnant or buy a house. Pew research polls indicate that couples put off marriage longer, and cohabitation is on the rise.

Yet there’s still this persistent pressure for men to get down on one knee (at a minimum — there’s also the option to retain a planner to help conjure something newsworthy).

Even in the most feminist and egalitarian couples I know, women talk about waiting impatiently for nervous or non-committal men to pop the question.

Friends and acquaintances have all kinds of explanations for why they depart from their otherwise egalitarian manner of decision-making with their partners to wait for him to ask. It’s often cast as personal preference, but there’s always an element of gender bias.

Some women tell me they’ve consider popping the question themselves. But then they find themselves waiting for him — because they’re attached to a fairytale idea they’ve envisioned since childhood, or because he’s the one who has to really come to grips with the idea of a lifelong commitment.

The underlying assumption here is that women are ready and waiting, and flighty men need to get their singleness out of their systems. That it’s only once men are ready on their own timelines that marriage can move from discussion to reality.

That assumption is embedded in the name of one proposal and wedding planning firm, The Yes Girls.

The tradition of men asking women gives men all the agency, leaving women in a role where they simply give a yes or a no. Ironically, for a couple that has already agreed they’re headed toward marriage, a proposal minimizes women even more; they’re left to just say “yes.”

If two people have made a decision jointly that they want to get married, why this responsibility for men to decide on the timing and the formalizing of that joint decision?

“A proposal planner provides a female’s perspective,” according to The Yes Girls website.

That seems a little redundant considering there’s a woman right there who the man is about to make the decision with. And that woman can, and should, feel free to step up and participate in that decision and its timing.

A man, meanwhile, might be off asking a bride’s parents for her hand in marriage. But women aren’t their fathers’ property.

Marriage isn’t a negotiation that grooms-to-be should having behind the scenes with their future fathers-in-law. It’s some of the most thrilling news of the couple’s life. Why not share that news together, with each set of parents, as a decision that was made with equal input from each person?

There’s no reason to forego a titillating, romantic engagement trip or dinner or party. We don’t have to set aside all the fanfare in a transition to more egalitarian proposals. Both partners can wear rings if they want something sparkly to show off.

Yet tradition, even some archaic practices, seems to have a way of creeping into even the most progressive people’s desires when it comes to weddings. Friends of mine have suddenly found a place for religion or family bonds that they might otherwise keep at arm’s length, wanting to keep weddings tied to their sense of how it’s always been done.

But some trappings of traditional weddings are sexist signposts of how mercenary marriages used to be. If we want relationships to evolve beyond transactions between men, we need to reimagine proposals as decisions that don’t involve men dropping down on one knee — and not by shelling out lots of money for an even more elaborate version of that old tradition.