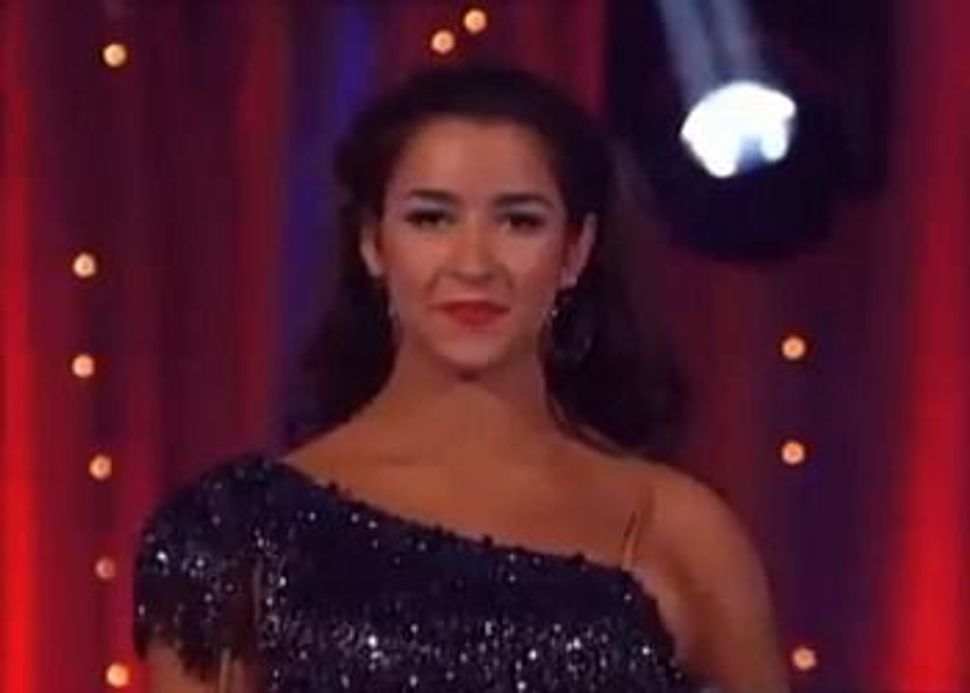 Aly Raisman prepares to dane the Cha Cha Cha on this week?s ?Dancing With The Stars.?

First up: the salsa.

This dance was all about the sex appeal, and it definitely felt like Aly was loosening up and becoming less awkward doing hip shakes, which can only be good for her future Latin dances. That said, Aly’s pro partner Mark Ballas really needs to cool it with the gimmicks in their dances. It’s one thing to use gimmicks (in this case, having Aly work at a fruit stand and literally shake pineapples in the beginning of the dance) to disguise a bad dancer, but Aly’s good enough that he should let it go.

Once the actual dancing got started, it was much better, although there’s still an over-reliance on Aly’s gymnastics moves. Part of the problem with the dance was that the salsa often lends itself to lazy choreography, and Mark didn’t give Aly much to do here. Still, the judges were impressed and Aly scored two 10s, her first of the season. With head judge Len Goodman giving her a nine (fact: 99% of the time on this show when a celebrity gets two 10s and a nine, the nine will be from Len Goodman because he is a stickler for the rules and does not care if he gets booed), that gave Aly an almost-unbeatable 29 points out of 30.

Then it came time for the duel cha cha dances. Though Andy Dick isn’t a terrible dancer, he’s not as good as Aly, and that showed when they had to compete against each other. Aly’s cha cha was quick, sharp, and a lot of fun to watch, while Andy’s was slower and relied more on choreography tricks. Unsurprisingly, the extra points went to Mark and Aly, leaving her with almost zero chance of getting eliminated this week.

Though Aly’s dance-off only lasted a few minutes, it had deep resonance with the rest of the show. Aly and Mark got the encore — a chance to repeat their dance on the results show, this time without the pressure of a score at the end — which is a huge vote of confidence for her. And, ultimately, it was her dance-off opponent, Andy Dick, who went home this week. Despite his controversial reputation, he was a decent dancer and came off like a really nice guy who had a good rapport with his partner, so even if he wasn’t going to win this show really helped with his image rehab.