Praying: A Mitzvah, Not a Crime 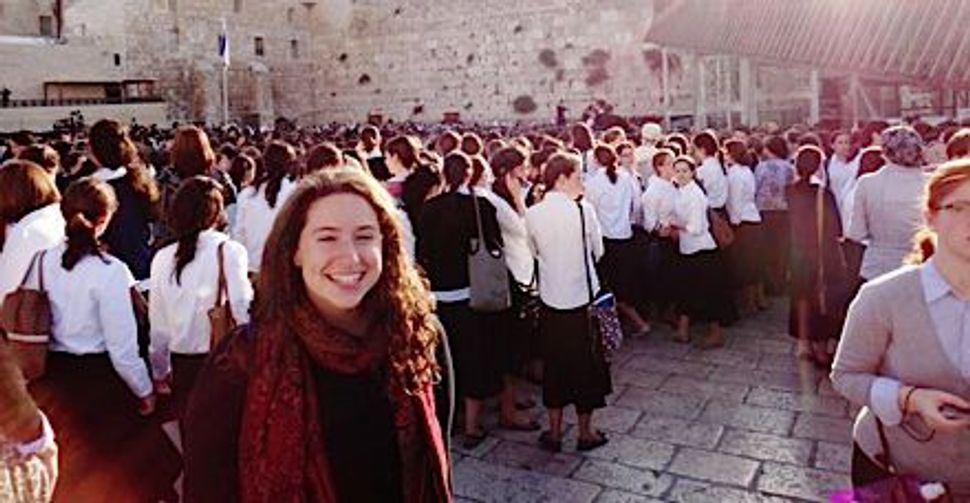 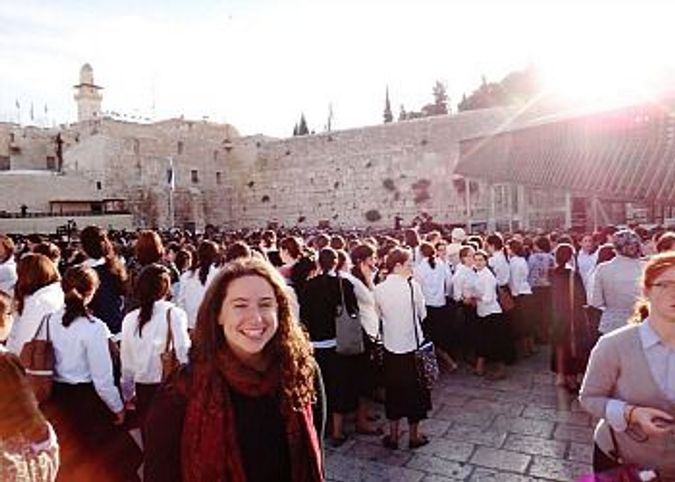 Criminals. Troublemakers. Attention seekers. These are just a few of the names that Women of the Wall have been called. I’ve met these women. I’ve prayed with these women. And you know what? I call these women discrimination-fighting superheroes with the guts to stand up for the human right to pray.

As an OTZMA participant and a rabbinical student at Hebrew Union College-Jewish Institute of Religion, I am blessed to have the opportunity to intern with this social advocacy group and experience the magic. Women of the Wall seeks to achieve the rights of women to conduct prayer services, read Torah while wearing tallitot or tefillin, and sing out loud at the Western Wall. Their quest is to change the current status quo that prevents women from doing so — and to educate Jewish women and the public as well as empower Jewish women to take control of their religious and prayer lives.

At Rosh Hodesh Iyar, the first of the month, I prayed in the women’s section of the Kotel. Surrounded by a couple hundred women pushing up against me with their prayer books, I didn’t feel claustrophobic at all. I enjoyed feeling close to them. I like feeling part of a team — one united army of women from all different branches of Judaism with the common goal of freedom in prayer.

Yet the Kotel was swamped with photographers, reporters and police officers watching us as if we were plotting evil. Orthodox men stood on chairs in the men’s section screaming at us to pipe down and to stop the racket. They stared us down as if we were parasites.

Despite the cameras, the yelling and the men’s chanting, I heard only one thing: the beautiful melody of the Shema. We looked up at the sky, closed our eyes and chanted the Shema like it was our anthem. Not worrying about the nasty Facebook comments people would inevitably make; the articles that would be written about us, or the police reports that may be filed, we prayed together in harmony. I soon watched police officers question innocent women. These women wore mile-long smiles on their faces and bubbled with passion as they let out the words of their favorite prayers. Is this a crime? Are these women criminals? No, they are certainly not.

Five women were taken away from our Rosh Hodesh Iyar service at the Kotel and detained. Thank goodness, these five detained women were released without any charges. The judge declared that there was no cause for the womens’ arrest and that the provocation was on behalf of those who oppose womens prayer. I’ve never personally experienced religious discrimination until this year when I walked to the Kotel on Erev Yom Kippur. I jumped up and down with excitement at the thought of praying in one of the most historic and holy places. Unfortunately, my memories of praying at the Kotel on Yom Kippur center around my experience of having the security guards make me remove my kippa and lock my new tallit in my backpack as if it was a weapon, even though men walked in with all of these same items without being harassed or bothered.

At my Reform synagogue in New York City, Temple Beth Sholom, I have the freedom to pray however I would like. Not only does my experience with Women of the Wall make me appreciate the times I’m treated fairly and equally, but it also encourages me to keep striving for equality and justice in an unfair society.

Today, as I squeezed through the crammed Kotel on Rosh Hodesh Sivan, I was initially overcome by anxiety, and I felt like a minority. Whistles being blown, men screaming and throwing chairs and water bottles, police holding back violence — it was complete chaos. I searched for Women of the Wall. Trying desperately to obtain some sort of security, I became overjoyed when I found Women of the Wall praying peacefully between the men and women’s sections of the Kotel. I witnessed the genuine smiles of my group and our supporters as we sang “Hallel,” and I tuned out the opposition. I no longer felt alone, and I instantly felt the camaraderie. Women and men wearing tallitot, kippot, and tefillin danced and rejoiced in prayer, despite the surrounding pandemonium. As I prayed, I reminded myself that the protestors are my fellow Jews and not the enemy.

After praying, witnessing a bat mitzvah ceremony and celebrating Rosh Hodesh, we concluded our service and the police escorted Women of the Wall supporters onto buses for our safety. As protestors spit at the buses, slammed on the windows, and hurled rocks, I wondered: Why are Jews hating Jews? What about K’lal Yisrael and Tikkun Olam? We should be united as Jews, working together to repair the world. We should be joined together in a covenent with God, celebrating a beautiful religion and a shared history. I felt as though the thousands of protestors viewed us as their enemy, but we are not their enemy. We simply want to pray freely at the Kotel and celebrate our Judaism in the way we feel called to.

Participating in OTZMA and receiving the opportunity to intern with Women of the Wall has been quite the journey. I am thrilled to be interning with them and promoting human rights. I pray that one day there will be peace at the Kotel, and all Jews will share it in harmony.

Praying: A Mitzvah, Not a Crime