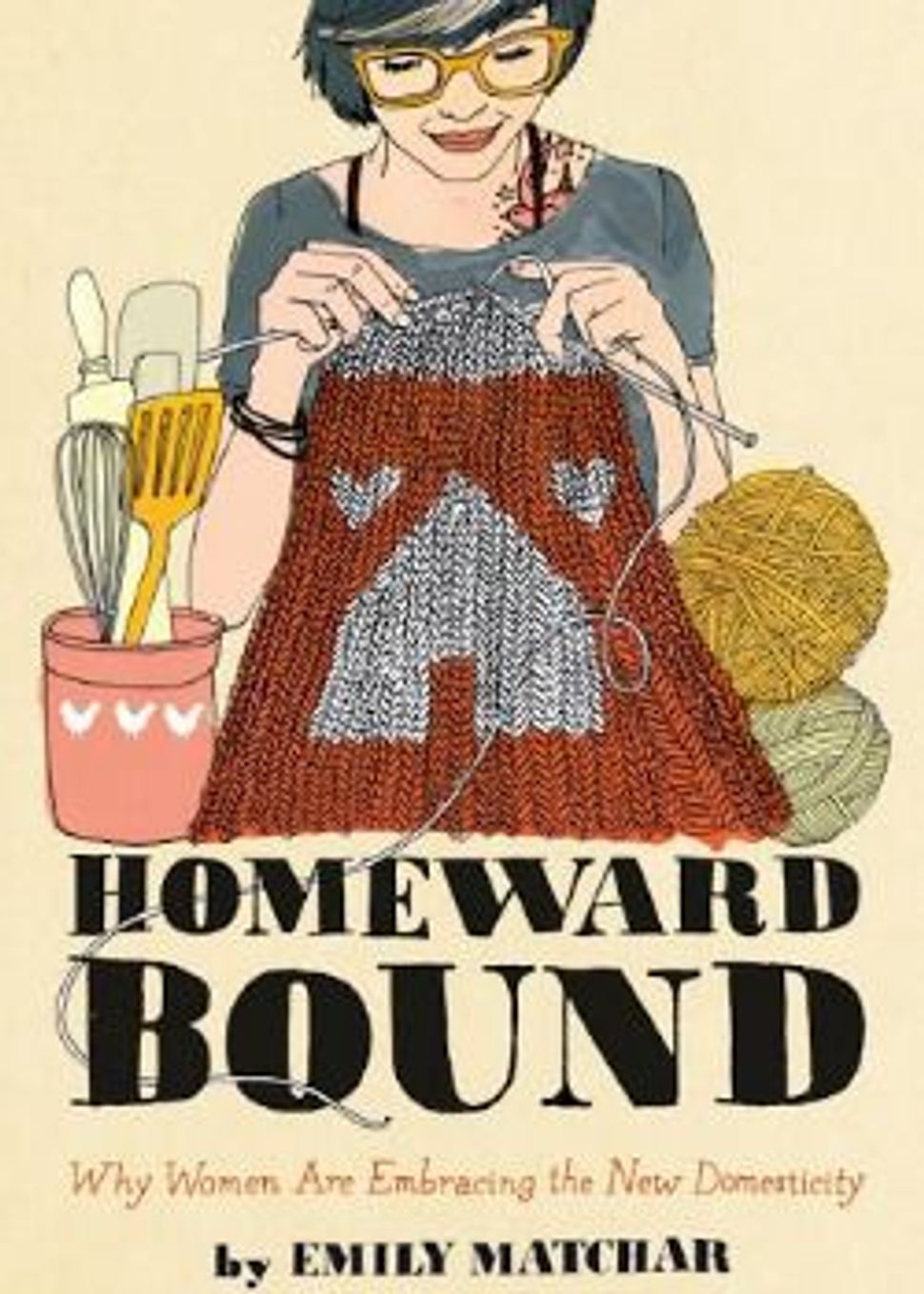 Been wondering what’s behind all those artisanal chocolate bars cluttering check-out lanes and tattooed women knitting booties for the babies permanently strapped to their chests? Or, as the show “Portlandia” so acutely captured in one of its most hilarious skits, the undeniable urge that crafty young folks have to put a bird on it?

So has journalist Emily Matchar.

In her new book “Homeward Bound: Why Women Are Embracing the New Domesticity,” Matchar examines why women in their 20s and 30s are increasingly passing up the corner office and even the corner bar, à la Carrie Bradshaw, for all things domestic. She investigates the rise of do-it-yourself everything — things like attachment parenting, crafting, homeschooling and raising chickens in the backyard — and how it is a symptom of the disillusionment young people, mostly women, feel with the institutions that they had once hoped to rely on. These institutions include workplaces that fail to be family friendly, public schools that fail to educate our children and a food system that fails to provide us with affordable, healthy and sustainable food.

The Sisterhood spoke with Matchar about who is embracing the New Domesticity, the ways in which it helps and hurts women, and how it is bringing radical queers and Mormons to the same side of the table.

THE SISTERHOOD: So what exactly is the New Domesticity?

EMILY MATCHAR: New Domesticity is the embrace of old-fashioned domesticity — crafting, cooking from scratch, gardening, making your own cleaning supplies, cloth diapering your children, etc. — by people who have the education and the means to reject these things if they wanted to.

What types of men and women tend to embrace it and why?

Generally, those who embrace New Domesticity are people who are concerned with the environment, with where food comes from and with living more fulfilling, more “authentic” lifestyles that don’t necessarily revolve around conventional definitions of success (though plenty are conventionally successful in their careers).

In what ways is it good for women?

Okay, in what ways does it hurt women?

The mania for DIY domesticity can raise the bar on what’s considered good housekeeping and good mothering. Many women feel judged these days for not cooking enough, or for not cooking the “right” foods — organic, local, seasonal, or for not being involved enough mothers. In an era of attachment parenting and make-your-own baby food, the standard for good motherhood seems to rise ever higher. It’s unfair that in 2013, women are still the ones held largely responsible for cooking, housekeeping and childrearing, and I do worry that this New Domesticity can make more work for already stressed and stretched women.

One thing I find curious, after reading your book and the recent story on feminist housewives in New York Magazine, is why these women seem hell-bent on contextualizing this as feminist, instead of just making it about the environment or parenting. Why do you think this is the case?

Good question. I think we all feel a need to justify our choices, and to feel that we’re making these choices from a position of power.

Also, in the book you point out how the New Domesticity appeals to liberals and conservatives, evangelicals and atheists, radical queers and Mormons. What is going on there?

The same things that appeal to one group often appeal to an opposite group for a very different reason. Ultra-liberal mothers may want to do homebirth and exclusive breastfeeding because it’s “natural,” while an evangelical woman wants to do the same things because “that’s why God made women this way.” Secular Berkeley types might want to grow organic gardens for environmentalist reasons, while conservative Nevadans grow the same gardens because they don’t want to rely on “big government” for their food.

Do you see a way in which men and women can engage with this homesteader spirit without it interfering with their professional ambitions? Or, perhaps more clearly, do you see much of a middle ground out there? For how many is the New Domesticity a weekend hobby and for how many is it an orthodox lifestyle?

There’s absolutely a middle ground. I think New Domesticity is a clear cry for reform to our corporate culture — people simply don’t want to give their entire lives to their jobs. But most people DO want jobs — satisfying, flexible jobs. If we changed the corporate culture to allow for more work-life balance, then more men AND women would be able to embrace domesticity without having to give up their ambitions.