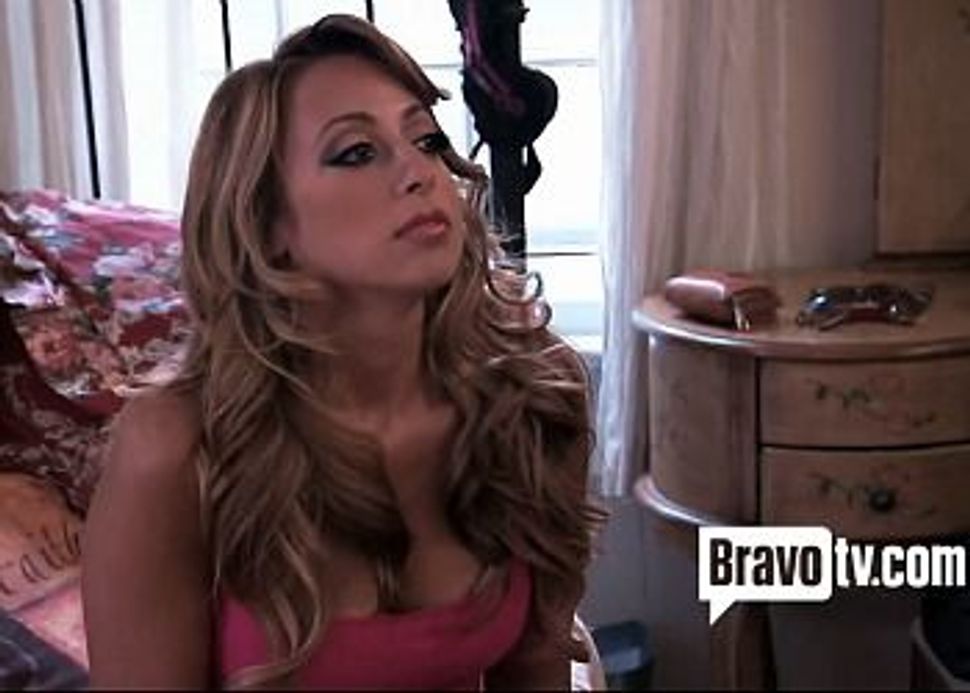 Could it get any worse? On June 2nd Bravo will debut a new reality show titled “Princesses: Long Island,” starring half a dozen spoiled women in their late 20s, all of whom are Jewish, according to the show’s publicist. If the series can be judged by the promo, they will give the already-offensive term Jewish American Princess a bad name.

The promo starts off with some woman who sounds like the love child of Fran Drescher and Joan Rivers screaming, “Guess what I have? Manischewiiiiiiitz!” and moves into a scene of bikini babes jumping into water when one girl screams “I think I broke my vagina bone!”

The stereotyping comes fast and furious: One girl says “My farklemptness is making me shvitz” and then another, who appears to be sitting in a limo, says, “Hasidic Jews, how do they get their curls so perfect?” At a bar, one of the characters says in a thick Lawng Oyland accent, “Are you guys Jewish?” Then someone named Erica drunkenly sings “Hava Nagila,” before falling flat on her face.

Then come the tears. One cast member cries to a friend, “Everybody judges me that I’m not married, and that I’m 27 years old like something’s wrong with me!” Another is seen snuffling into her cellphone, “Mom? Help….me” before dissolving right into a wedding scene, which is presented by the series as a Long Island Princess’s only worthy goal. This nauseating slice of life concludes with one “princess” snarking, “Shabbat shalom. Go fuck yourself.”

Charming. Asked if she thinks the show stereotypes Jewish women, the publicist — who asked not to be named, saying after finishing our short interview that she did not want to be quoted — said, “Not at all. You can’t really make any judgments about the show until you’ve seen it. I’m Jewish as well. No one on the show claims to represent all Jewish women. It’s a study of a subculture of an area of Long Island, of women who are in their late 20s, living at home and trying to navigate relationships with their families and friends. All that good stuff.”

Now, I’m as much a fan of Bravo’s guilty pleasure reality series as the next brain-candy consumer. I really enjoyed the original Real Housewives of New York. Loved watching Jill Zarin on that show and was bummed when she didn’t return for more recent seasons.

But “Princesses: Long Island” takes junk television to a new low. It looks like a Northeast iteration of “Here Comes Honey Boo Boo.” Instead of watching apparently poor, stunningly un-self aware Southerners make fools of themselves, we have indulged Long Island girls with too much time and money on their hands doing the same.

Though I have nothing at all in common with the young women who appear to think that they will be able to parlay their participation into husbands or at least personal appearance deals (the bio of one cast member reads like a personal ad), the idea that anyone watching this show will think that they somehow represent Jewish women is embarrassing.

Back in 2008, some people, including a justice of the U.S. Supreme Court, complained that HBO series The Sopranos stereotyped Italian-Americans as mob members.

With “Princesses: Long Island,” I finally know how they felt.