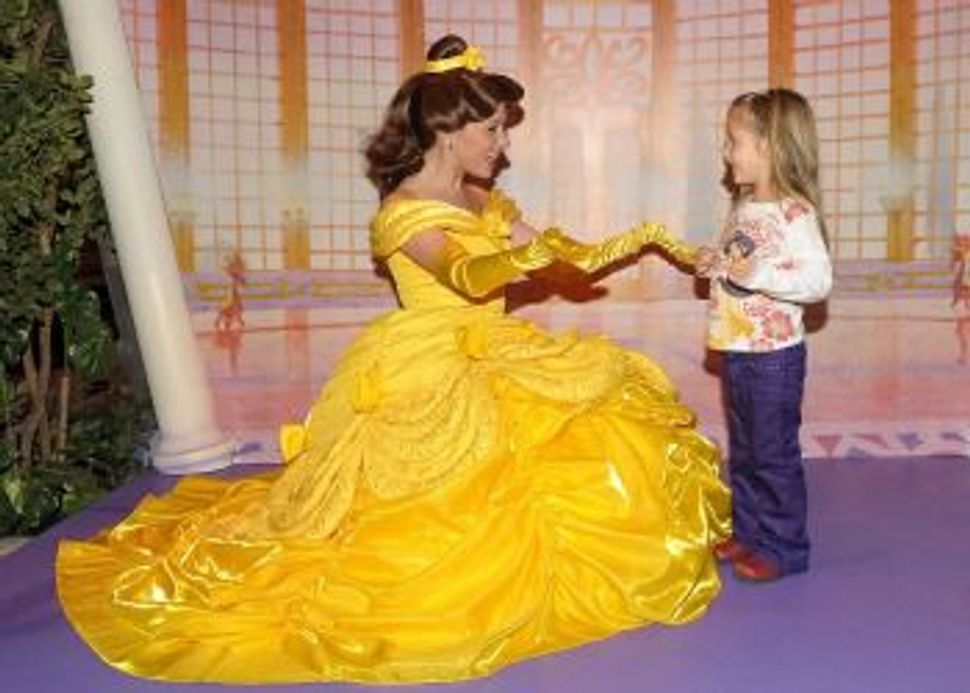 Disney has come under fire for “feminizing” and “sexing up” Merida, the spunky Scottish princess of the Pixar film “Brave,” in order to add her to its much-maligned princess collection.

Disney changed her hair from wild curls to silky tresses that cascade suggestively over one shoulder. Her simple dress was replaced with an off-the-shoulder gold and turquoise number that includes a low-slung belt to emphasize her now thinner waist. Her skin exchanged its ruddy red hue for porcelain white. She’s wearing lipstick and rouge. There were also changes to Merida’s demeanor; she now stands with one hip out and her head cocked seductively to one side. Her bow and arrow are nowhere to be seen.

Everyone, including the character’s creator, Brenda Chapman, chastised the company, forcing it to pedal backwards with the promise that we’d see the old, spunky Merida soon.

This is where I confess that although I loathe commercialized princess culture, I was once quite an active participant. Recently, I found a note I’d written to my father when I was a very small child. It was addressed to him as “King Richard” (my dad, a history buff, must have been amused) and included a scrawled portrait of my family, rudely-drawn crowns atop all our heads: my mother as the queen, my brother as prince and, of course, me as the princess, which I’d already learned was the Hebrew translation of my name.

Yes, I, a future feminist, was princess-mad. I drew tall medieval princess caps on everything, waltzed around in hand-me down gowns and mooned over Disney’s Belle, Ariel, Jasmine and Aurora. (For some reason I was more agnostic about Cinderella.) My eyes would have popped out of my head if I’d been able to purchase anything branded with all of these princesses on it together, like the products Disney now offers. My parents would have resisted indulging this desire, but my two sets of Jewish grandparents would most likely have caved in at some point, and the princess paraphernalia would have come home.

At the very same time as I princess-pined, however — or at least in short succession — I was also reading “Caddie Woodlawn” and adoring cross-dressing heroines like Viola in “Twelfth Night,” Maid Marian, Mary Martin dressed as Peter Pan and more. I relished building dams in muddy streams, playing in the dirt, picking up newts with my bare hands and walking around asking my female classmates if they wanted to join the “tomboy club.” Clearly I had not fully figured out what tomboy meant, given that I was also playing with princess paper dolls, but that’s the beautiful thing about girlhood. The lucky children whose gender expression is not yet policed are, for a time, able to freely exist in realms which aren’t actually mutually exclusive: the feminine and masculine, the gendered and genderless, the vulnerable and tough. (This is all summed up poignantly, at least to me, by Dar Williams’ song “When I Was a Boy.”)

Disney’s decision vis-a-vis poor Merida, its ultra-commodification of princess and “girl” culture, and the sexualization of young girls through consumerism forces hard limits on playfulness. The company’s aggressive commercial hawking of a group of princesses that have been normalized to look like skinny white clones stymies youthful exploration and wonder.

Why force the awful restrictions on femininity that plague older women on girls, too? We should go the other way. In fact, society would be far better if we allowed any live-and let-live attitude we have towards gender in the very youngest years last for our whole lives. Today a princess, tomorrow a tomboy, the next day, what does it matter anyway? We all contain multitudes.

I liked princesses as a child because fairy tales and their inhabitants captured my fancy, not because I felt I had to look or act a certain way. When I got older and faced beauty standards and their confusing strictures, I was devastated. Disney should be appealing to the imaginative capabilities of children with a wider range of characters and settings, not putting limits on what kinds of heroines exist in the world.