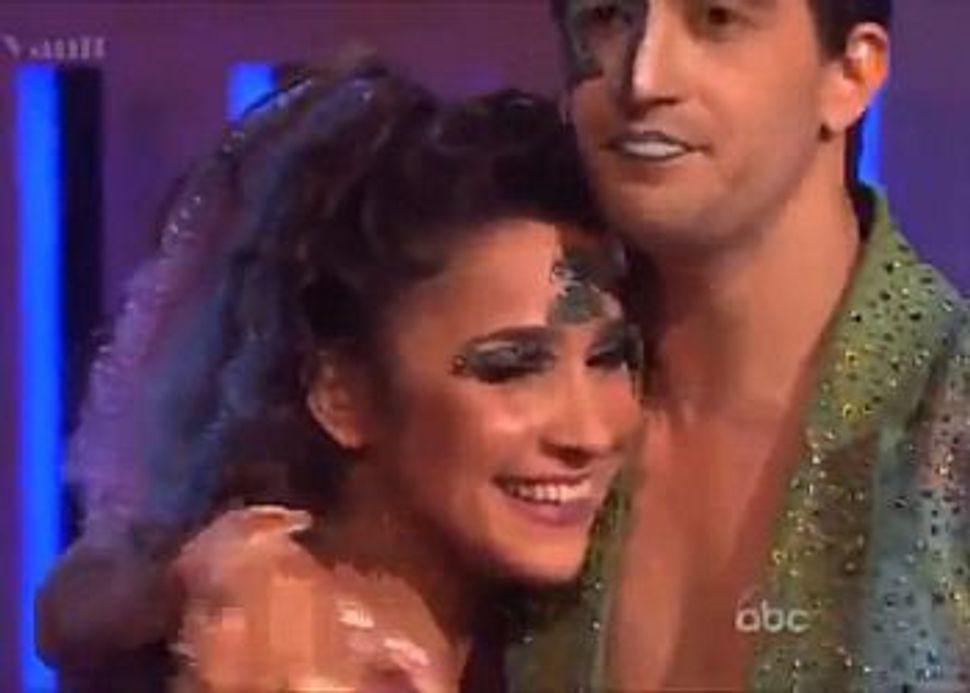 Last week, Aly Raisman’s backstage training clip was all about how, before the Olympics, she used to come in fourth place all the time. That should have been a warning. On the final week of Dancing with the Stars, producers did something different and went with a final four instead of a final three. That meant even more dancing, even more flash, and even more commercials that padded ABC’s pockets at the end of May sweeps. Each of the four remaining celebrities — country singer Kellie Pickler, football player Jacoby Jones, Disney star Zendaya Coleman and Aly herself — had to do two dances: one “makeup” dance that was an improved version of a dance they’d struggled with earlier in the season, plus a “super-sized” freestyle dance, where there were no rules and anything could happen.

For her makeup dance, Aly and pro partner Mark Ballas picked the samba, which they’d gotten poor scores on earlier in the season. The samba is a sexy dance that involves skimpy costumes and booty-shaking, which Aly and Mark delivered capably. Unfortunately, it set a similar tone to the freestyle they put together later, which didn’t give them much of a chance to show range or variation.

When it came to the freestyle dance, Mark wisely decided to focus on some of Aly’s best assets as a dancer: her gymnastics skills. In the opening sequence, Mark explained that since Aly was used to working on a horizontal bar, he wanted to challenge her by switching to a vertical bar. That was fine, but the ‘vertical bar’ looked like a stripper pole, and that meant that a teenage girl was wearing a revealing outfit and dancing around a stripper pole on national TV.

It got worse from there.

Though Mark has choreographed some great freestyles in the past — including one that won the show for fellow gymnast Shawn Johnson — this one just didn’t work. The lighting was confusing, the moves were erratic, and the whole thing looked way too much like the Afro-Jazz routine from just a few weeks ago, giving the audience a major sense of déjà vu. Mark said that he hoped to use the dance to show “how much Aly had learned on the show,” but the whole thing looked derivative and not that challenging, especially compared to the dances from the other contestants. Aly and Mark got a perfect score of 30 from the judges, but so did all three other competitors — a regular happening in the finals, which means that the winner will almost certainly be determined by audience votes.

On the Tuesday night big results show special, Aly was the first one called out, putting her — poetically — in fourth place once again. The winner was Kellie Pickler, who clearly ran away with the viewer vote after she and pro partner Derek Hough put together a pared-down, emotional contemporary dance that had many audience members (and judge Carrie Ann Inaba) in tears. The theme of the finale seemed to be “the pure, raw dance wins out over the gimmicks and tricks,” and unfortunately Aly and Mark’s choice to over-rely on gymnastics stunts, funky lighting, and futuristic costumes hurt them in the end. Then again, she still has Olympic gold medals to go home to, so I think Aly’s going to be just fine.