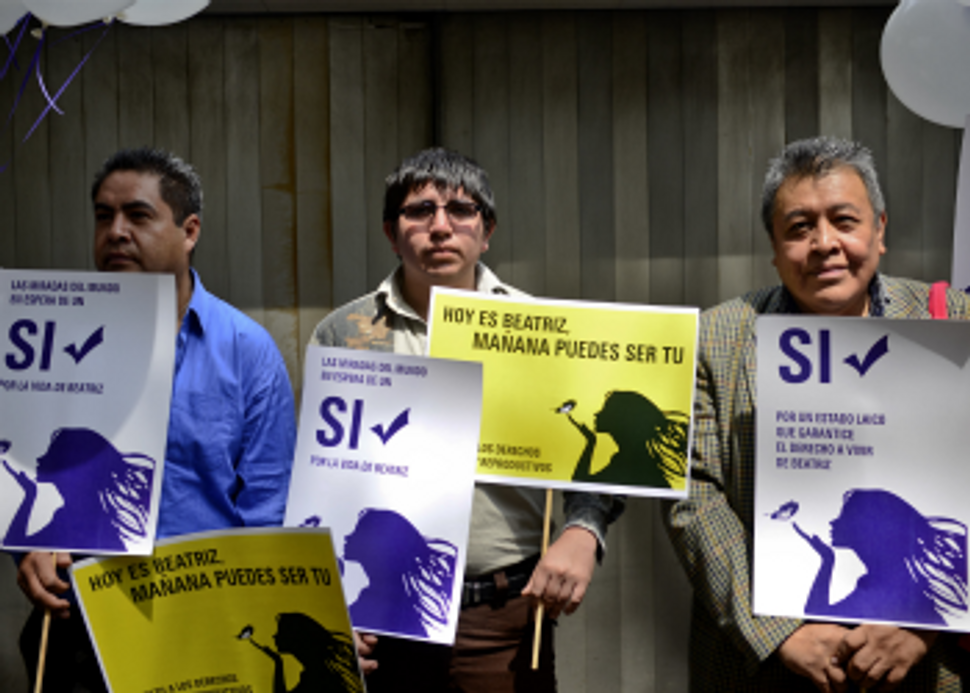 Members of Amnesty International protest in support of Beatriz in front of El Salvador?s embassy in Mexico City on May 29. Image by Ronaldo Schemidt/AFP/Getty Images

The old second-wave feminist slogan goes: “Not the church; not the state; women must decide our fate.”

The horrifying case occurring in El Salvador today is an example of both church and state brutally interfering in the endangered life of a woman for the sake of misogynistic ideology.

Beatriz is a young mother in heavily Catholic El Salvador with a number of severe medical conditions and carrying a non-viable pregnancy. In her strictly anti-abortion country, doctors still advised a therapeutic termination — as did a number of international human rights agencies — but the procedure has been repeatedly denied.

Instead, justice has been forestalled and a mother’s life is in danger. Pressure from the bishops and a recent, disheartening ruling from El Salvador’s Supreme Court mean that Beatriz’s fate remains in limbo, her prognosis grimmer each day. From the New York Times story on the court ruling:

Beatriz’s lawyer…described the ruling as “misogynistic” because it placed the rights of a fetus with little chance of surviving after birth over the welfare of a sick woman who already has an infant boy to care for.

“The court placed the life of the anencephalic baby over Beatriz’s life,” said Víctor Hugo Mata, one of her lawyers, speaking by phone from the Supreme Court. “Justice here does not respect the rights of women.”

Last month, a group of doctors overseeing Beatriz’s care at the National Maternity Hospital sent a report to the Health Ministry arguing that as the pregnancy progressed, the risk of hemorrhaging, kidney failure and maternal death would increase.

It’s terrifying to watch someone, even someone you don’t know, get closer and closer to death because of outdated and draconian rules. It’s also terrifying to know that the extreme policies in countries like El Salvador are being sought by conservatives here in the States.

Women like Beatriz have a right to choose to preserve their own lives — and that is Beatriz’s choice.

Beatriz has also spoken out about her situation. In a video uploaded on Vimeo she pleads in Spanish, “I don’t want to do it but I know the child won’t live and I think it is the only way to save my life.”

The court’s denial of her wish for bodily autonomy is heartless — and infuriating. Some activists are even petitioning the Pope, begging for any possible reprieve, while RH Reality Check has set up a fund to help local groups advocating for Beatriz’s life.