The Perks of Having One Child 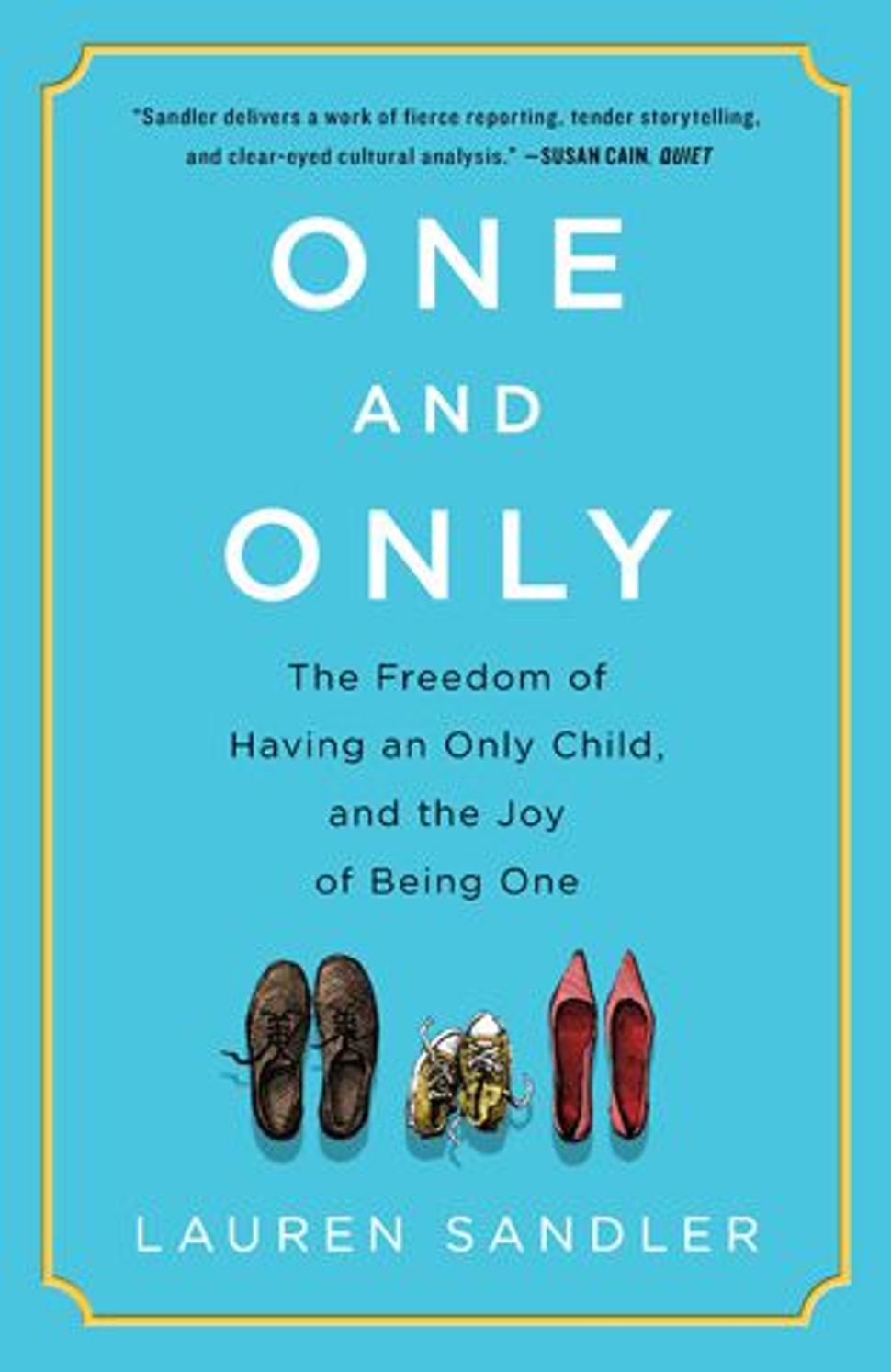 Might some of us be more fruitful without multiplying? Lauren Sandler thinks so, and she wrote about in her new book, “One and Only: The Freedom of Having an Only Child and the Joy of Being One.” In the book, Sandler takes on stereotypes of only children and explores whether single-child families might be the solution for parents looking to strike a better balance between work and life.

The Sisterhood spoke with Sandler about why she loves having one kid, how she found inspiration in her own mother and how she creates a sense of community for her daughter. 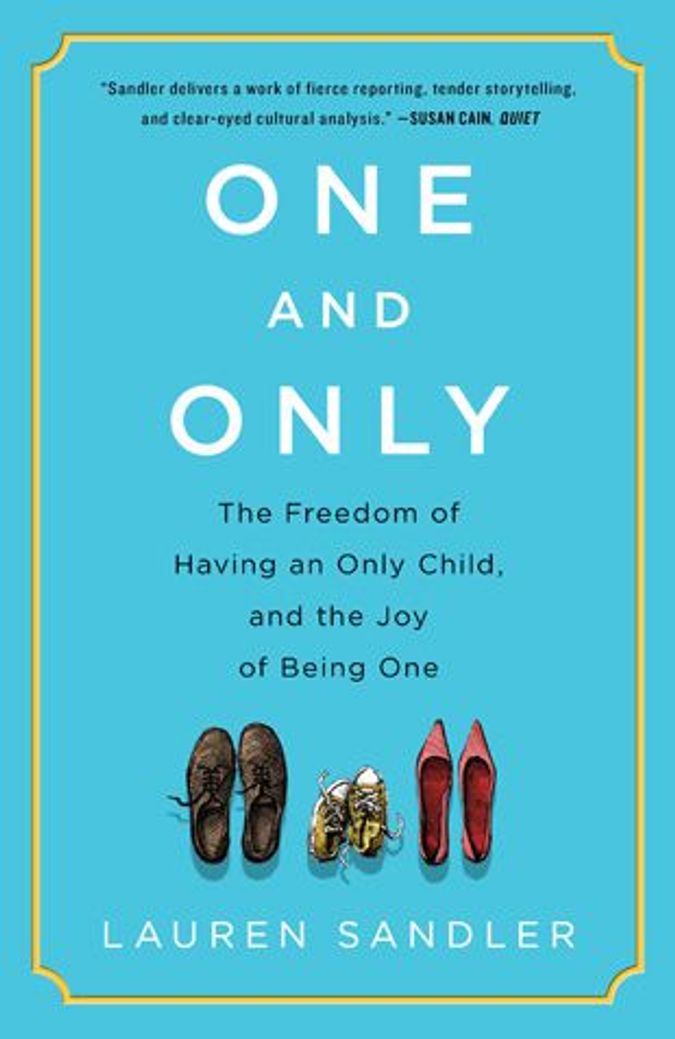 THE SISTERHOOD: So, why did you write this book?

LAUREN SANDLER: When I learned that most people have their first child for themselves, and their second child for the benefit of their first, I thought, wow, that’s a lot to do to keep your kid from being an only child. And when I found that our stereotype of the lonely, selfish, maladjusted only child had been disproved over hundreds of studies and decades of research, it struck me that something was really off. I wondered if people had better information about only children, what choices they’d feel freer to make—or in the case of people who didn’t have much say in the matter, how they’d be freed from all that guilt. Since it struck me that the more we parent the less we can do anything else—including dedicating ourselves to our relationships, our community, and the betterment of our society. (Or, heck, just spend a weekend plowing through a novel or having dinner with friends!)

In a nutshell, if possible, what is your case for having only one?

To be clear, I don’t think everyone should just have one child. I simply want to get better information out there so that people can more freely make their own choices. But simply, only children are basically the same as anyone else. And where onlies tend to differ are positive traits: achievement motivation, self-esteem and intelligence. The reason for these differences is that parents don’t dilute their resources—of time and energy as well as money—between other kids. Meanwhile, parents have some of those same resources left over for themselves, which at a time when we are working more as well as parenting more, and still wanting more from our lives that just duty, means a great deal. I like to call it a liberated adulthood: a life in which we pursue the pleasures and meaning as well as just responsibility.

What are some of the stereotypes of only children and parents with one child that you are working against?

That only children are lonely, spoiled misfits. And that parents of onlies don’t care about their kids as much as they care about themselves.

Did the recently revitalized debate about balancing work and life change the way you saw having only one? Or did you always see having one child in this context?

Honestly, that conversation broke open after I had finished writing my book. It was always the context in which I saw this discussion. And it continues to surprise me that in all this talk of “having it all” and “leaning in” we don’t discuss becoming mothers only once. I wish that conversation was also more about how lousy US family policy is, and how readily we ignore the structural barriers to achieving some peace between work and “life,” which in this conversation usually just means motherhood, as though our lives only take place at the office and tucked away in our domestic cocoons. But until we have more social support to reconcile the conflict, our individual choices are paramount. And to me, having just one child allows me all the richness of parenting with more time and energy to devote to both my work and my life outside of work.

You seem largely inspired by your mother, for whom having one child allowed her to live the life she desired. Can you tell us a little bit more about her?

She taught me that to be a good mother you have to be a happy person. I think it’s a mighty fine motto for parenting, and one we seem to lose sight of. My mother wanted to do meaningful work—she has long worked in education reform, in curriculum development and in policy—and wanted to keep living in the apartment she and my father bought before I was born. They didn’t want to move to the suburbs, or be, as they used to used it “house poor.” Plus, they really liked me. We’ve always had a great time together. And it’s allowed both of my parents to be very happy people, and live a life very much on their own terms. They’re both great models.

In the book you look at religious families who tend to have bigger broods and are happier for it. What is going on there?

I find the correlation between religiosity and fertility to be fascinating. It’s normative in observant communities to have more kids. There’s doctrinal support for it, and as part of a religious community, there’s social support. Plus, children are seen as a greater gift, and a more essential duty, then they tend to to be in more secular communities—not that we don’t also see our kids a miraculous and love them with all we’ve got. And there’s also pressure, and failing to go along with the pressure leads to unhappiness for many people. Different corner of our society have different norms, and in observant communities those norms tend to be very important to uphold.

As a secular parent of one, how do you create community, Jewish or not, for your family? How important is this to you?

It’s true—I’m as secular as they come. And my community tends to be, too. I have a very close knit group of friends. We vacation together, watch Mad Men every Sunday. Two of them live upstairs, one of them we co-own our house with. Then we have an amazing group of parents and kids in our neighborhood, which leads to lots of spontaneous dinners and sleepovers and rich friendships for both kids and adults alike. Some of those friends are Jewish, some from Israel, some American, and a number of them work in the arts, which brings a wonderful degree of Jewish culture into our lives. It’s a fortunate life.

The Perks of Having One Child