Instead of Shul, Escorting at an Abortion Clinic 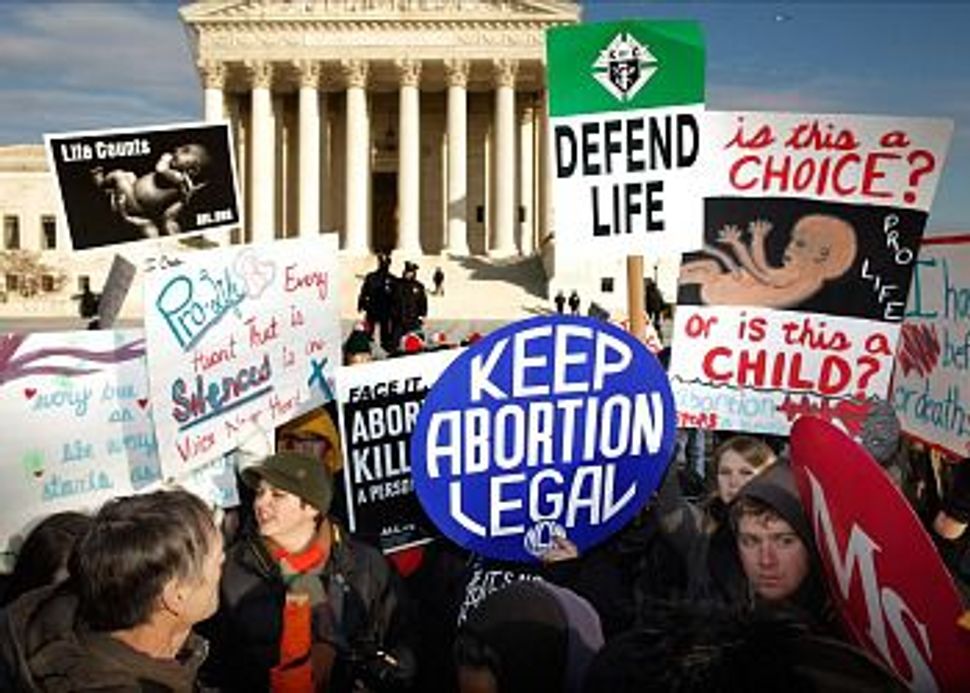 It’s more or less the same scene every Saturday morning: A car service pulls up in front of the women’s health clinic where I escort. It pauses, drives further up the street and turns around. The woman inside pays the driver, then studies the crowd of 20 or so protestors praying loudly in front of the clinic. (Some protesters try to talk to the person walking in, or hand them literature as they leave. I’ve seen other protesters follow clients down the street.) Finally, she opens the car door. We, the escorts, wait for her to step onto the sidewalk and then one of us walks with her to the door of the clinic, which is being held open by another escort.

As a clinic escort, my job is to help the people who need to get into the clinic inside. It is not to aggravate the protestors, or to win an argument, or to know why someone needs to use the clinic. It’s not to reveal anything about myself to anyone involved. The fact that I haven’t had an abortion isn’t relevant when I’m escorting, but that doesn’t mean I’m not thinking about it the whole time, and then some.

As activist Renee Bracey Sherman told me in an interview:

I think it’s great to have people with and without experiences discussing abortion. The job of an ally, or someone without a personal experience, is to make the mainstream spaces more supportive so that those with an experience are safe, visible, and heard. The challenge lies in how to let people share their stories, no matter how complex, in safer spaces.

Every year, the Civil Liberties and Public Policy Conference “From Abortion Rights to Social Justice: Building the Movement for Reproductive Freedom” is held at Hampshire College in Amherst, Mass. The Friday evening event, “Breaking Silences: An Abortion Speak Out,” is an important part of the conference experience, as it allows people who have had abortions to share their stories — and those who have not to listen and learn from those personal experiences. Listening is an important part of [practicing good allyship], and is key to supporting people through abortion experiences and building a robust reproductive justice movement. An ally works to end a form of oppression from which they receive privilege. Allies align themselves with the people over whom they hold privilege and work to dismantle the system of oppression that gives them those privileges.

“When I do any public speaking about my research in abortion stigma or my work as an abortion doula,” Poonam Dreyfus-Pai, director of the Bay Area Doula Project, told me in an email. “I am upfront with people about the fact that I haven’t had an abortion. My knowledge comes from working directly with people, hearing their stories and their experiences, centering their needs… Being an ‘expert’ is not really my end goal, nor do I think it’s necessary to be a good ally or advocate.”

Thinking about how to create space for and amplify the voices of those who have had abortions when we don’t have that same reality is deeply important, but we have to actually do the work of it — to step back, listen and recognize that abortion stigma is a real (and enormous) part of how abortion is talked about and experienced. Said Bracey Sherman: “Those of us with abortion experiences don’t need advocates speaking for us, we need advocates who clear a crowded space, give us the microphone, and allow us to speak for ourselves.”

On Yom Kippur, I went to the clinic. I didn’t have a crisis about spending the morning there instead of in shul; I’d made up my mind a while ago that this was what I would do. There are a lot of reasons why I escort, but at the top of the list is that I’m angry about the harassment, the stigma and the blatant, unrelenting mistrust of women that, for anti-choice activists, accompanies abortion at any phase of pregnancy. It’s rare that we can use our physical bodies to change a situation (one reason why protests and civil disobedience are so important), and so I use mine to do something that should be simple: bridging the gap between the sidewalk and the clinic door.

Instead of Shul, Escorting at an Abortion Clinic