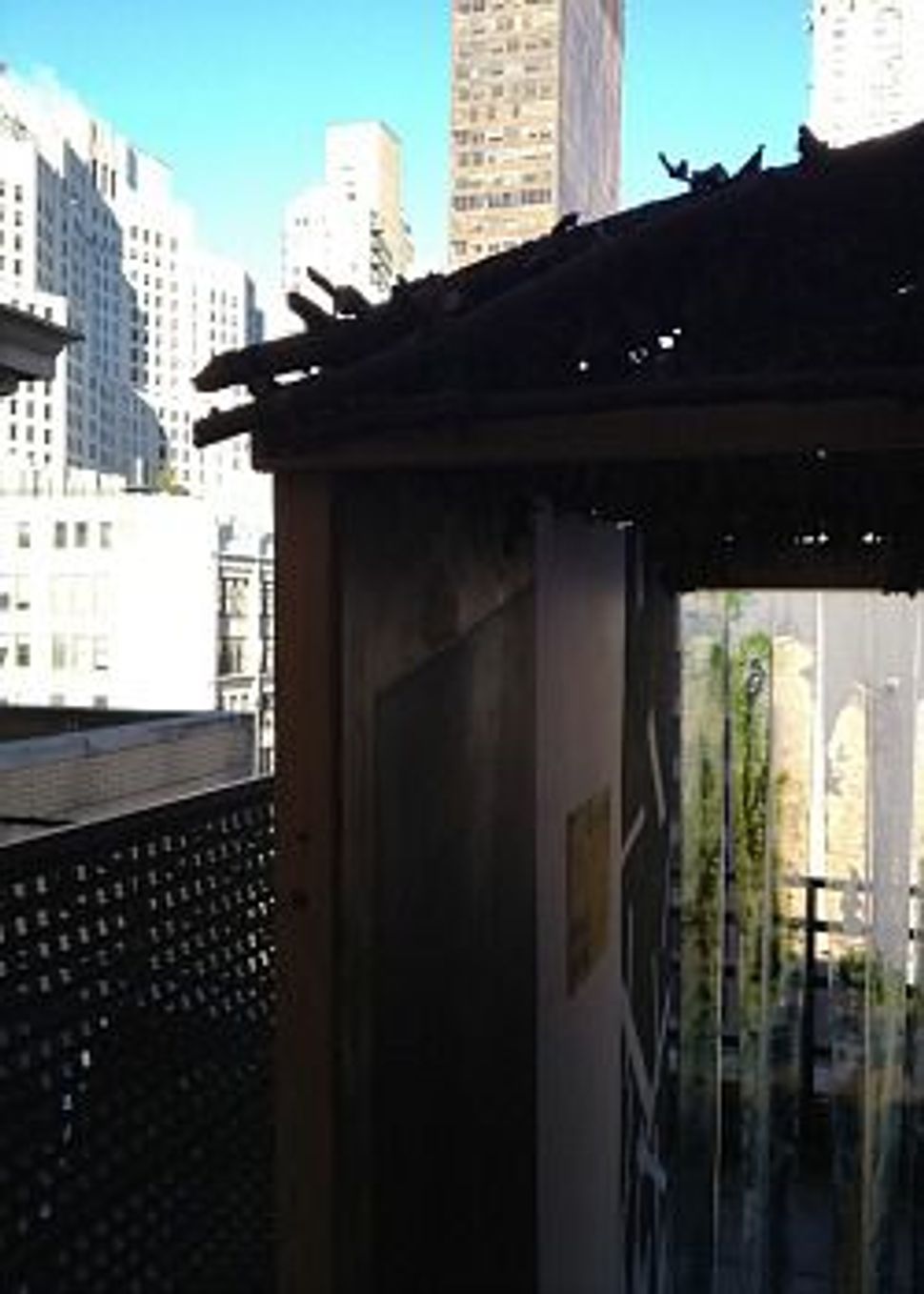 The outside of the Sukkah Salon. Image by Danielle Durchslag

This Sukkot, New York-based artist Danielle Durchslag launched “Assembly Required: A Sukkah Salon” on the terrace of her downtown apartment. The project, which she co-curated with artist Ryan Frank, was so successful that it was extended through September 30, past the actual date of Sukkot. That the Sukkah Salon’s existence outlasted the original lifetime of the holiday is fitting with the project’s exploration of the Sukkah’s restrictions and how they can inspire contemporary art and re-create Jewish ritual for the broader community beyond observant Jews who already observe Sukkot.

“It really exceeded expectations,” Durchslag told the Sisterhood. “We easily had 80 people come through in the opening. It was really what we dreamed for this exhibition. The sukkah inspired amazing conversations about the crossover between the secular and the divine.”

Durchslag’s vision was to expand on the idea of a sukkah as a communal space, a hut that a family or a synagogue creates according to Jewish law, decorates and then invites guests to. She aimed to create a kosher-for-use sukkah (it was built according to Jewish law except twine was used to secure the roof) which becomes a communal space that bridges the religious and the secular art world. Essentially, a sukkah in which observant Jews could pray and eat that could double as a spiritual, yet secular, space for artists of different faiths and backgrounds.

Durchslag and Ryan, along with eight other artists, created art specifically for the sukkah, focusing on capturing what they called the “in-between made manifest.” In other words, their art explored the idea of the sukkah as a space between slavery and freedom, between something “longed for and unresolved.” Each artist was given a panel of wood and free license to use any materials they wished (keeping in mind that their work would be open to the elements).

For her contribution, Durchslag dismantled plastic grape garlands from her childhood sukkah decorations and sewed the grapes into a circular mandala structure around a portrait which is the blending of the face of a famous Tibetan Buddhist master and the artist’s own eyes. The pink shape and round color of the striking piece suggests the glistening seeds of a pomegranate.

“My panel is about being in between a Jew and a Buddhist,” she said. “I practice in both spaces. It is a portrait of my spiritual path — between being Buddhist and Jewish, between my former self and my most compassionate self, the self I would like to be.”

Playing with the idea of permanence, artist Jessie Henson created a panel covered with sequins that shift and shine differently depending upon the light. Shannon Finnegan’s panel read, “this is impossible” and “this is possible,” taking on an essential contradiction and the “in-betweenness” of the sukkah.

Eighty guests attended the sukkah’s official opening, which was also a salon-style event attracting artists and non-artists, Jews and non-Jews. At a Shabbat dinner that Durchslag and Frank held in the sukkah, Sandi DuBowski, director of the documentaries “Trembling Before G-d” and “Jihad for Love,” raised the idea of the sukkah as a place of impermanence.

That night, “we talked about [how] the sukkah highlights a reality we ignore because it’s uncomfortable: We are impermanent, the structures we live in, the cities we feel secure in. It’s like that famous Buddhist phrase, ‘this, too, will pass.’ The sukkah is about that truth — we all will pass, including us,” said Durchslag.

Before the end of the Salon’s run, local art collectors purchased Finnegan’s piece, making a work of art created for a “temporary” outdoor space, in effect, permanent. It’s illustrative of the project’s mission: testing the definition of duration and impermanence, and what it means for a sukkah to be a place where Jewish ritual and community is created within, and, simultaneously, sustained outside.