My relationship to feminine appearance-enhancing rituals is always inverse to how tired and busy I am. Sure, I have become a marginally more “put together” person over time, competent enough to get my basic life and work tasks accomplished and also to put on concealer before I swing back out my door for evening outings. Now that I’m old enough to understand my body type and my personal style, I really enjoy the fashion aspect of image-crafting: the bright colors, the fabric combinations, the artistry and control. From the pleasure a striking jacket or a pair of jeans torn in the right spot affords me, I can extrapolate as to why some women, even feminists, embrace the whole nine yards: salon, Sephora and sample sales.

But then again, I only find getting dressed up fun the first night of any week I partake in the ritual. And once I’ve had to paint my face and pick an outfit more than twice in a few days, I begin my resentful grumbling. Even though I sit down for a few pedicures per summer, my toenails usually end up going ragged. Thus, like Bridget Jones or another desperate chick-lit heroine, I still have moments when I’m dry-shaving my legs before a wedding, or running to a drugstore to buy makeup that I’ve left behind, or foregoing one of these preparatory routines altogether because it just wasn’t high on my priority list. 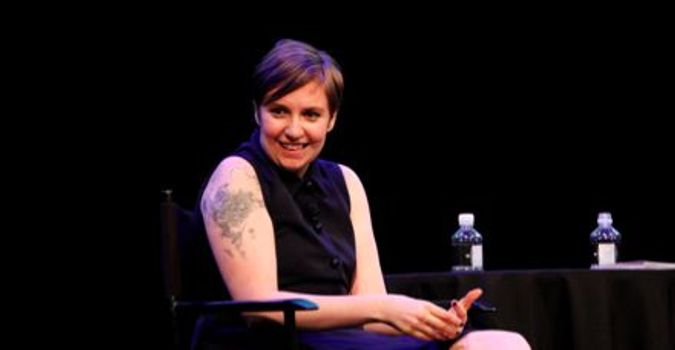 Lena Dunham is at the vanguard of the ?meh? generation, writes Sarah Seltzer. Image by Getty Images

The truth is, I have long also secretly patted myself on the back for my intermittent indifference to beauty culture, chalking it up not just to laziness and boredom, but also to feminist resistance. And that’s because even if on the surface I feel guilty about not conforming to standards, deep down I genuinely believe that untamed hair, extra weight here and there, and skin, free of goopy makeup are completely fine — great, even, made greater by their insistent naturalness in a coiffed and plucked world. Fashion and beauty labels literally profit off of female insecurity. To refuse to participate may be a personal choice, but it’s a bold one.

Now, I’m happy to know that my take-it-or-leave-it attitude has been officially labeled revolutionary by the media, now charting the rise of the schlubby woman. A story in the New York Times even called shrugging off the norms of feminine presentation “the insurgency of imperfection.” It named Lena Dunham and Mindy Kaling, among others, as vanguards of the “meh” generation of women. To their ranks I would add Katniss Everdeen, fictional heroine (and revolutionary leader) of The Hunger Games, who sees getting her legs shaved as a grotesque and needless act, and the actress who portrays her, Jennifer Lawrence, who projects a blithe lack of concern with her weight or with seeming ultra-feminine.

A piece in Jezebel puts it another way: women live under the constant threat of being called ugly. But what that mostly means is that they aren’t buying in.

I think when women are called ugly, they are not actually ugly — they are simply noncompliant. They are not willing to spend the time, money and energy it takes to live up to a cultural beauty standard that says skin tones must be evened out, eyes must be enhanced, cheek bones accented, weight managed, desirability advertised, and so on.

From now on, when I don’t feel like schlepping to the salon or getting dressed an hour early because I’d rather take a walk, dream, brainstorm or sit on my butt in front of the TV I am going to think of myself as a voluntary, if momentary, noncompliant revolutionary. Hopefully that mantra can scatter all of our guilt.