What ‘Hocus Pocus’ Taught Me 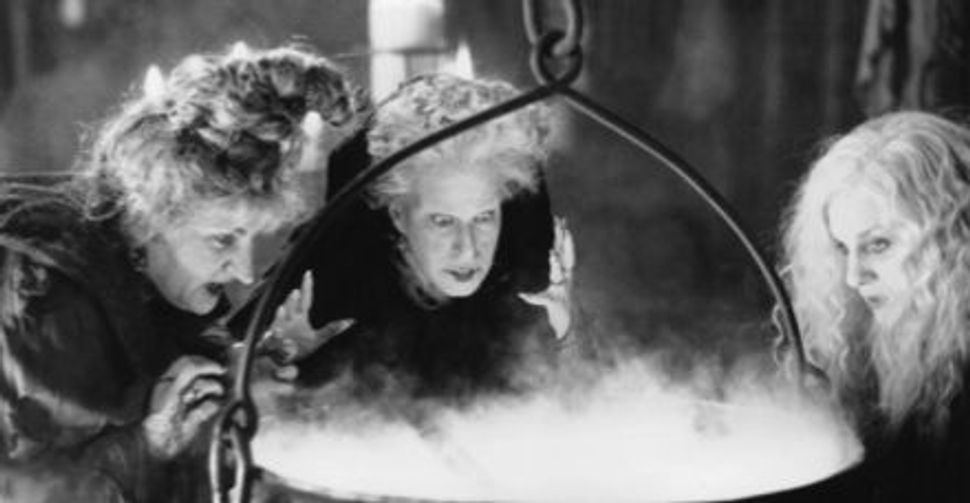 The Sanderson sisters of ?Hocus Pocus.? Image by Disney

For the last four weeks, cable television has been running amok, amok, amok with more showings of the Halloween classic “Hocus Pocus” than you can shake a dead man’s toe at. The 1993 film has become a millennial favorite and to celebrate the fact that it’s been 20 years since the Sanderson sisters put a spell on us, towns around the country have held public screenings, the internet has gone wild with .gifs, and cast reunions have been held. (Omri Katz is as cute as ever). 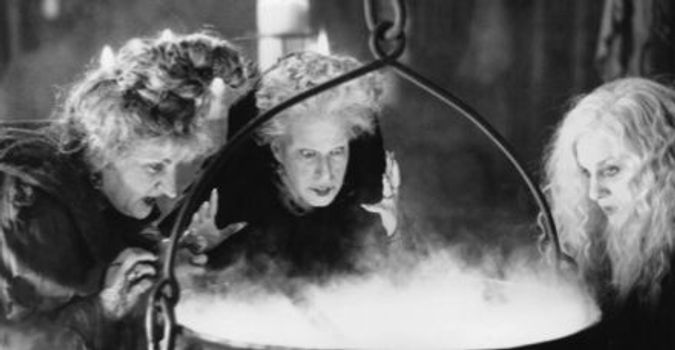 The Sanderson sisters of ?Hocus Pocus.? Image by Disney

I’ve had a bad case of “Hocus Pocus” fever since it came out when I was 10 and my sisters and I trick-or-treated as Winifred, Mary and Sarah. The film follows the trio of witches, who were executed in 1693 and then revived 300 years later, as they try to secure their immortal existence in modern-day Salem, Mass. In addition to being one of my favorite films, the movie is also a great source of Jewish pride. Both Bette Midler (who plays Winifred Sanderson) and Sarah Jessica Parker (who plays Sarah Sanderson) are Jewish. Omri Katz (who plays Max Dennison, the teenager who accidentally resurrects the witches) is the son of Israeli immigrants and Thora Birch (who plays Dani Dennison, Max’s brother) has Jewish ancestry. Even Vinessa Shaw (who plays Allison, the Dennisons’ classmate) is a MOT. There are few things better than a troupe of talented Jews starring in a hilarious film about magical, book-adoring women, loving your sisters,and Halloween mayhem.

Sure, we could turn a dark eye to the presence of Jews and witches in the film. We could note that Jews were persecuted alongside women in Europe during the witch hunts, and sometimes accused of witchcraft themselves. We could point out that the Salem witch trials, though much smaller in scale, are often compared to the Holocaust as another case study in mass hysteria and murder.

But all of that is no fun… and doesn’t change the fact that “Hocus Pocus” is the greatest Halloween movie of all time (this point is irrefutable and I refuse to argue it, dost thou comprehend?). So let’s make like Max Dennison and stop being cool intellectuals just for one day and think about all the ways that the Sanderson sisters are actually terrific Jewish feminist icons.

First of all, the Sanderson sisters are powerful, confident, and comfortable in their identities. They know who they are, what they want, and they’re not going to succumb to societal pressure. Even though their identity involves being technically evil, the film portrays them as simply awesome.

They are women we love for far more than their appearance. We love them for their power, for Winnie’s smarts, for Sarah’s silliness, for all of their spectacular personalities. While I would hardly advocate sucking the lives out of little children to become immortal, there are far worse Jewish female role models. Yes, these women worry and they have family drama. But they take charge, they think on their feet, they’re sexually aware, hilarious, and make the best of what they’ve got (riding mops and vacuums through the sky is pretty resourceful). Yes, they are on a quest to become young and beautiful — but they want youth so that they will live longer. “Boys will love me!” Sarah squeals, but that’s a secondary consideration to the fact that the more time they have on earth, the longer they’ll be able to enjoy life.

The sisters’ different personalities illustrate some of the many ways to be strong, empowered women. Winifred is tough and smart and in control. Sarah is boy crazy, more traditionally pretty, and a bit ditzy — but she’s still frighteningly good at her job (who wouldn’t go into her “garden of magic” — which she uses to lure children and snatch their youth?) Mary is a peacemaker and sometimes goofy, but able to calm her sisters down and see both sides. And they are all completely fantastic and comfortable with themselves. They all have agency. That’s a message worth hearing, a spell that’s worth being under.

Plus, how many times have we all wanted to stick some annoying, cat-calling dude in a bird cage and hang him from the ceiling? No one calls Winifred Sanderson a “chick.”

What ‘Hocus Pocus’ Taught Me