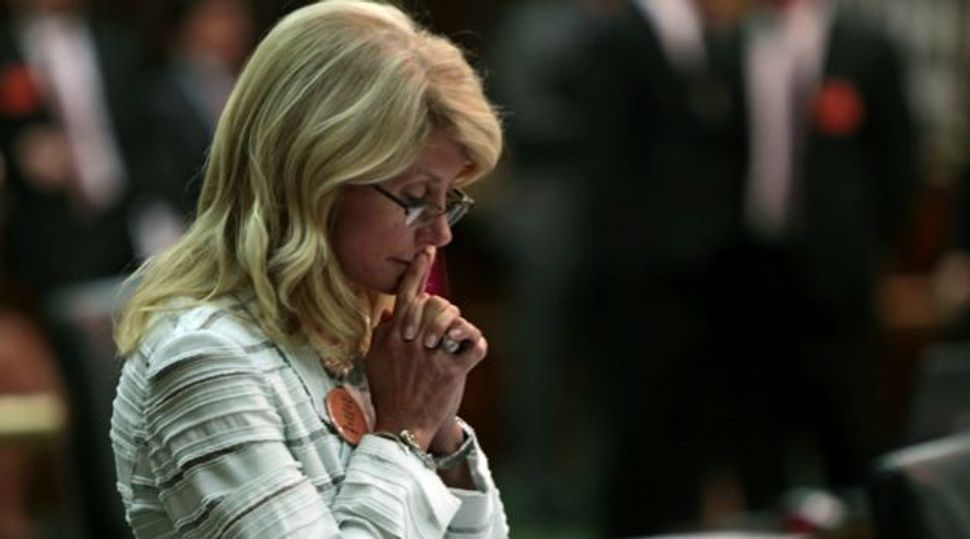 Right now in Texas, women are getting turned away from abortion clinics thanks the set of targeted regulations aimed at abortion providers once filibustered by Wendy Davis (pictured below), eventually upheld by a conservative appeals court.

The scene on the ground is not a pleasant, or a fair one. The Austin Chronicle reported “tears” and confusion at Planned Parenthood. Andrea Grimes, reporting for RH Reality Check, described a chaotic situation as Texas facilities attempt to “shuttle” patients with now-cancelled appointments for procedures to other, open, providers. Of her patients, CEO of Whole Woman clinics Amy Hagstrom Miller, said at a press conference, “They get really angry, asking, ‘Who decided this?’”

Anti-choice politicians, is the answer.

This is the reality that abortion-rights advocates have been warning about for decades: the state is now directly intervening and making decisions about women’s bodily autonomy. It’s already happened to an extent, with a latticework of restrictions so thick in many states that the right to choose is negligible. But what we’re seeing in Texas is the process of shrinking access unfold in dramatic real time. A conservative legislature makes rules that limit clinics; these rules are passed, they ricochet around in the courts; if upheld, eventually clinics close or stop providing abortions.

Then, women like Marni Evans, who had scheduled an abortion in Texas, have to travel to terminate their pregnancies. Evans’ story, as reported by the Texas Tribune, is a disheartening glimpse at the future for women in many states controlled by anti-choice legislatures.

She said in an interview that she received a call from Planned Parenthood late Thursday evening informing her that her procedure for the following day had been canceled due to the appellate court ruling. “My first reaction was to feel fairly devastated, to feel like my rights were being taken away from me,” Evans said, “to feel very disappointed that elected officials had the ability to make decisions about my and my fiancé’s life.” Evans plans to spend her savings on a plane ticket to Seattle to get her abortion. As for women without such savings, they’re out of luck. They will now likely have to raise an unwanted child on funds that weren’t sufficient for a plane ticket, submitting essentially to state-mandated forced pregnancy.

Abortion opponents claim to support a culture of respect for individual dignity and freedom from interference, but we’re seeing the result of their policies is the polar opposite. But when confronted with actual women’s pain and suffering, they have no answer and turn to platitudes about protecting the unborn.

To fill in the gap, reproductive rights supporters should donate to their local abortion funds.