A Vision for a New Western Wall 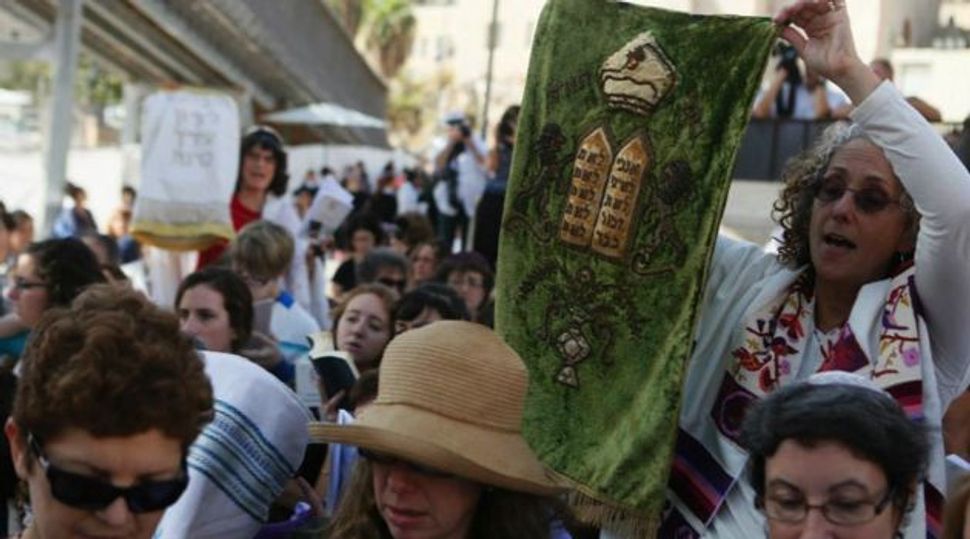 On November 4, I celebrated the 25th anniversary of Women of the Wall with over 600 women at the Kotel — a joyous event that went off with little of the usual chair-throwing, whistle-blowing and megaphone-enhanced cursing that the group normally endures during its monthly prayer protests. Two days later, Israeli Foreign Minister Avigdor Lieberman donned a tallit and celebrated his acquittal on corruption charges at the Kotel.

I was struck by the juxtaposition. For 25 years this group of pious, multi-denominational, serious women have tried to gain the right to pray at the Kotel with tallit, tefillin and Torah, and have only recently won the tenuous right to the first two but not the third. Lieberman can swagger right up to the front with his kippot-clad guards and be sure he will be welcome.

I wish I could feel that the stones themselves are imbued with holiness. But the mechitza (the partition between men and women) has slowly moved to the right — both physically and metaphorically — from half the Western Wall being open to women to only 12 meters compared to the 48 for men. Presidents and popes place their little notes in the crevices without being briefed about or taking note of what happens on the other side. Scores of evangelical tourists squeeze their way through to the front trying to soak in the Jewish vibe while praying for their own messiah to come back and redeem them and the place. Shas leaders preen for the press and pray there for success in their next campaign. There are separate entrances, and now a “men’s only” upper plaza where women cannot even tread. And day after day both male and female Haredim pray there for the restoration of the priesthood, the Temple and the sacrifices, taking up the spaces closest to the stones. Those prayers and subsequently the stones which absorb them do not speak to me, or for me. Instead they have become a symbol of an encroaching public misogyny, an ultra-Orthodox legal hegemony and a manufactured emotional tourist-industry “high-point-of-your-trip” site that is part primitive and part Disney.

I can think of a hundred other places in Israel where I feel more spiritual. Give me instead a trip to the Ramon Crater, a hike to the top of Masada, a sunset in the Galilee, an afternoon at Yad Lakashish watching 90-year-olds in Jerusalem create Judaic art, a Friday night singing “Lecha Dodi” at the port in Tel Aviv. Give me instead the countless Jerusalem synagogues where on any Shabbat the harmonies of men and women move me to tears.

That does not mean I do not fully support Women of the Wall. I understand those for whom the Western stones are the only stones which have historical memory and the weight of tradition. In my dreams, like them, I want a Western Wall where every Jew feels welcome, nurtured and valued. I want an apolitical wall not used to garner religious votes. I want a spiritual wall where harmonies are welcome and I can pray a silent Amidah with my tallit over my head. But that Kotel does not exist. The stones have been sullied and I think we need new “old” ones.

Women of the Wall is at a critical crossroads. Some members believe that the Western Wall can still have power for women, and that, if they fight hard enough, women’s prayer will one day be welcome there. And some of them know this is not possible, will never be possible, and in the meantime the right to don tallit and tefillin is hanging by a thin thread. This second group feels we have been given a historic opportunity to create and renew, and represented by the board of Women of the Wall, has agreed to move its monthly service over to the southern part of the Western Wall. There you can stand above fallen Herodian stones that are as old as the stones of the Western Wall. But this site doesn’t have the optics of the main part of the wall, the backdrop of the iconic paratrooper liberation photo of 1967.

Until the government agrees to Women of the Wall’s list of criteria, and builds a beautiful, appropriate and equal venue in the southern section, above the fallen Herodian stones, the group will continue, on a monthly basis, to fight for space and dignity in the women’s section. But if the demands are met, we will be able to pray with sincerity and without harassment and can return to the original spiritual direction with which Women of the Wall began.

Am I giving up? Abdicating the Wall to the Haredim when I say that I support moving to the southern Wall? I do not think so. I think instead that Women of the Wall will go down in history as having reinvented the Kotel. For this we will need imagination, the same imagination that allowed us to envision a woman in tallit when we had never seen one, a woman leading prayers when we had never heard one and a female rabbi when we had never met one. While these southern stones may not be the stones we remember, they will be the stones our grandchildren remember. As the French feminist Monique Wittig wrote, “You say there are not words to describe it, you say it does not exist. But remember, make an effort to remember, or, failing that, invent.”

In my mind, Women of the Wall isn’t moving from the Kotel. It is moving the Kotel itself. When all the Women of the Wall demands are met, including one entrance for all, visible and equal choice between three sections (men’s, women’s, mixed), equal funding for all three sections, equal state recognition for all three sections and authority over the egalitarian section given to a co-ed group of advisors from all denominations, the new Kotel will be ready and those stones will gain a deep sacredness just like the others. We will, to be sure, miss the old Kotel, like immigrants miss the old country. But we will be successful in our new home when we determine that it offers us opportunities we never had before and we grab those opportunities with full kavanah. Avigdor Lieberman may still be welcome at the old Kotel, but I will finally be welcome at the new one.

Elyse Goldstein is a Reform rabbi in Toronto and the author of four books on Jewish feminism. She is a longtime supporter of Women of the Wall.

A Vision for a New Western Wall