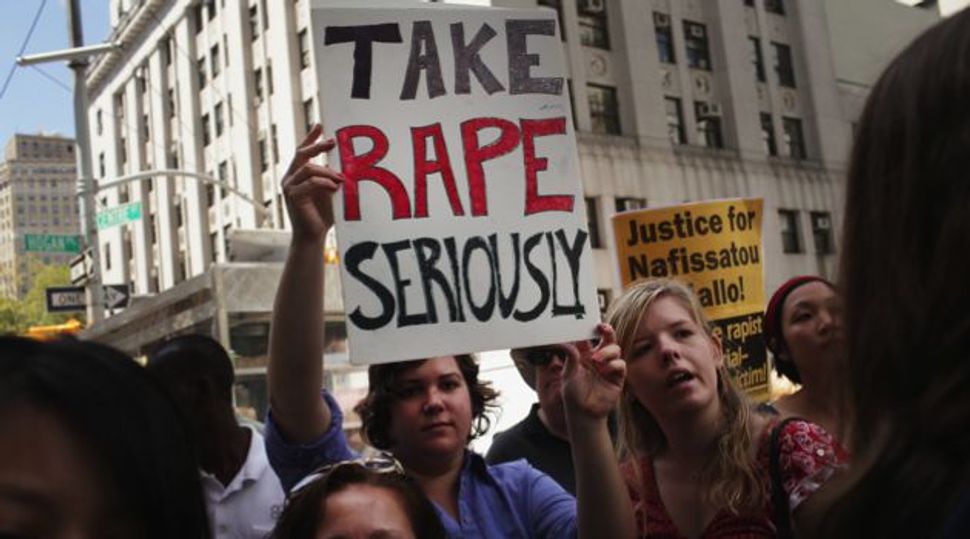 I didn’t learn the story of the rape of Dinah, Jacob’s only daughter, until college, in a Bible as Literature class at Barnard. This might not have been so odd except that, one, I have 12 years of day school and yeshiva under my belt, and, two, she’s my namesake, so you would think I would know the one story in which she plays a starring role.

There are a lot of reasons, though, why this week’s Torah portion is not on the standard Torah class syllabus. Foremost: rape. The Torah offers plenty of other, cleaner tales to choose from that don’t involve sex and violence and that are more palatable for teaching to children and adolescents.

But it’s not just the rape, which is over by the end of the chapter’s second sentence, that keeps this story from being told. It’s also the aftermath, which is seriously troubling and challenging to translate into a morality lesson.

The story begins with Dinah’s one decisive action – venturing outside of her father’s home to the land of Canaan:

“Now Dinah the daughter of Leah, whom she had borne to Jacob, went out to see the daughters of the land.”

(You may remember Leah as Jacob’s first, but less-beloved, wife. Her father, Laban, substituted her in when Jacob thought he was marrying her sister, the reproductively-challenged Rachel.)

Everything else in the account is done to her, including, of course, the rape itself.

“And when Shechem the son of Hamor the Hivite, prince of the country, saw her, he took her and lay with her, and violated her.”

Contrary to recent retellings, like Anita Diamond’s “The Red Tent,” which casts the tale as a love story between Dinah and Shechem, we know nothing at all about how she felt about it or reacted afterwards.

What we do know is this:

After forcing himself upon her, Shechem’s “soul cleaves unto Dinah,” and he tells his father, “Get me this young woman as my wife.” At this point, Jacob hears that Shechem has “defiled” his daughter, but decides to stay quiet about it until his sons return from the field, where they are tending to the family’s cattle.

When Jacob’s sons return, they are “grieved and very angry” over the “vile deed.” Yet when Hamor comes to speak with Jacob, they pursue marriage negotiations for Dinah and Shechem. Dowry, land and even Hamor’s own daughters are bargaining chips before a final price is agreed upon. Jacob and his sons say that they will agree to allow Dinah to marry Shechem — and let Jacob’s family merge with Hamor’s — if Hamor, Schechem and every man in the city is circumcised.

“We cannot do this thing,” team Jacob says to Shechem and Hamor, “to give our sister to one that is uncircumcised… Only on this condition will we consent unto you: if ye will be as we are, that every male of you be circumcised.” Once that happens, they say, “Then we will give our daughters unto you, and we will take your daughters to us, and we will dwell with you, and we will become one people.”

Hamor and Shechem agree, and surprisingly, the men of the city do as well.

Except, we learn, Jacob’s sons weren’t negotiating in good faith. “The sons of Jacob answered Shechem and Hamor his father with guile, and spoke, because he had defiled Dinah their sister.” And on the third day after the mass circumcision, “when they were in pain,” two of the brothers, Simeon and Levi, “came upon the city unawares, and slew all the males.” They rescue their sister before the other brothers join in for the traditional victory plunder, though the Torah is careful to note, once again, that the brothers “spoiled the city because [Shechem] had defiled their sister.” The spoilage includes not only “flocks” and “herds” and “all their wealth,” but also “their wives, took they captive and spoiled.”

Finally upset enough to actually say something, Jacob admonishes his sons, but only for making him look bad. “Ye have troubled me, to make me odious unto the inhabitants of the land.” But it’s Jacob’s sons who get the last word, responding indignantly to their father, “Should one deal with our sister as with a harlot?”

It’s not hard to see why most Jewish educators aren’t clamoring to teach this bloody, morally complicated episode, one with no clear-cut good guy or bad guy. Dinah’s brothers, the heroic avengers, give up their moral high ground, not only through the mass homicide, but also by taking the newly widowed wives as captives afterwards. Shechem, originally a criminal, is by the end of the story, a lovelorn, empathetic victim. Jacob is spineless and silent. And unlike most Torah stories, where God tells us directly what is right or wrong, in this one, God never speaks up.

There are a number of interpretations of this vexing story. In classic victim blaming style, early rabbinic sources condemned Dinah for going to see the Canaanite women in the first place. Later commenters, like Diamant, ignore the rape itself, reading it as a story of star-crossed lovers instead of one of abuse and vengeance. Many focus on the brothers’ crimes instead of Shechem’s.

In my view, God’s silence is the biggest question here, as well as the answer. God, normally the Almighty Judge, the Smiter of Sinners, has nothing to say on the rape, the massacre, or the fact that the brothers’ plan hinged on twisting one of Judaism’s most sacred mitzvot, the brit milah, to serve their own diabolical ends. In that silence I read tacit approval.

Despite God’s reticence, the Torah’s narration clearly condemns rape, describing it as a “vile deed” and “defilement,” even though it never provides similar commentary on the circumcision-through-deception or mass murder. Although the general consensus is that vile deed notwithstanding, Jacob’s sons did a terrible thing, I would like to posit another theory: by wreaking havoc on the Canaanites, Jacob’s sons were condemning rape culture that allowed their own sister’s assault. And, God is fine with this.

Though we no longer condone murdering an entire town for the acts of one, we do still believe that “it takes a village,” and hold entire towns responsible for the failures of a few. The Torah, it appears to me, agrees with this stance. We condemn, for example, the people of Steubenville, Ohio and Maryville, Missouri for allowing modern-day princelings, football stars and political heirs, to rape young girls. We cheer when the hacking group Anonymous issues the ominous threat, “Maryville, expect us.” We rue the commenters who, like the rabbis of yore, tell us that these girls “deserved to be raped,” or that rape victims in general should take responsibility for their traumas.

We also accept that heroes, like Jacob’s sons who take the enemy’s wives as spoils, can be flawed. When the New Yorker’s account of the Steubenville rape story included interviews with blogger Alexandria Goddard — credited by many for bringing national attention to the Ohio crime — and her derision of the prosecutor as “Gravy Legs” because “gravy spreads easily,”, feminists collectively cringed at Goddard’s inherent hypocrisy, but nobody argued that it should undo the good she wrought. That Goddard herself was an imperfect advocate for women did not make her activism any less important.

Yes, it’s impossible to read the story of Dinah — whose name means “judgment” — without having a visceral reaction to the brothers’ actions, to see them as an overreaction, and to even feel pity for the hoodwinked Shechem and his father. But we need to recognize this knee-jerk emotional response as being akin to CNN’s Poppy Harlow’s, who upon hearing the Steubenville rapists’ convictions, grieved for their lost futures instead of their victim’s.

Just as God’s silence allowed for rabbinical victim blaming and misplaced empathy for the story’s wrongdoers, the lack of leadership on changing rape culture allows some to claim there’s no no real systemic problem at all. And sadly, victims’ voices, like Dinah’s, all too often get washed away in the ensuing aftermath and uproar.

But that’s why, despite its flaws, complexities and misguided interpretations, we need to read this story as both the Torah’s condemnation of rape, as well as its willingness to hold responsible the people who allow a culture to evolve where rape is acceptable. God may not wield the gavel here but as the translation of Dinah’s name suggests, judgment was still rendered.