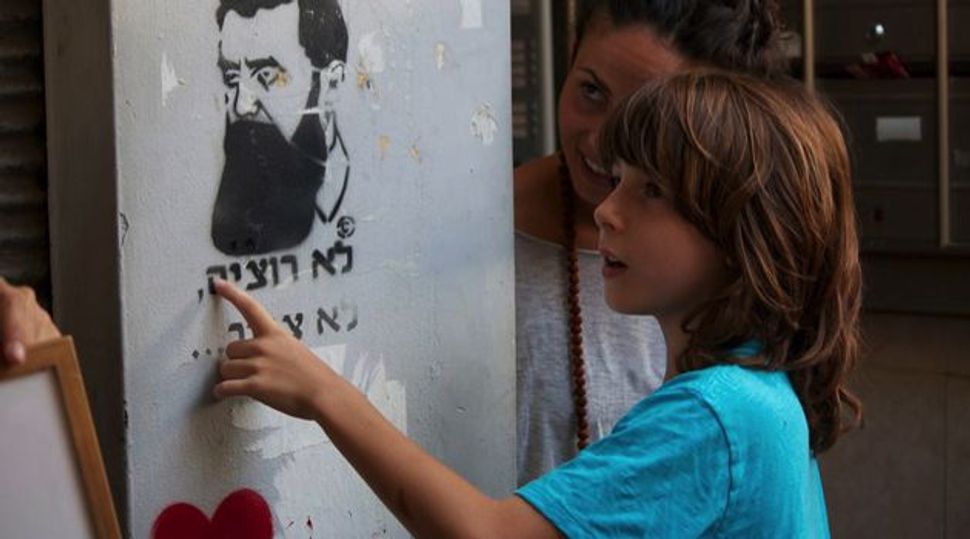 I gave my 10-year-old son, Zev, the Pew survey on American Jews. The entire thing. One Sunday afternoon at our kitchen table.

It all started the night before, when an undergraduate student at Hillel at Ohio University, where I am a rabbi, told my son during our Sabbath dinner that he recently found out he is Jewish. My son (pictured below) asked this student for clarification. He wanted to know more about this just-discovered identity; it was as if the student had found Judaism underneath the bed in his dorm room, or at the bookstore while buying books for class. The student replied: “My mom informed me that her parents were Jewish. So it turns out that I’m Jewish!”

Later that evening, back at the house, my son wanted to talk. Or rather, he wanted to monologue.

“Judaism,” he began, “is not just inside you like a dormant virus.” I turned to my husband with a look of desperation on my face. My son continued: “I don’t think it’s waiting there for you to realize it exists, or for you to coax it out, or for it to be teased out by some long-lost relative. In fact,” he asserted, “Judaism does not exist if you’re not practicing it.” He went on to claim, basically, that there is no such thing as an inherited Judaism. To the horror of grandparents everywhere, my son actually proclaimed that a person “isn’t just Jewish because their parents or grandparents are Jewish.” I took a gulp of my Shabbat wine and grabbed my computer. The Pew survey and my son had collided. My 10-year-old was talking about many of the same things we’d all been debating since the Pew survey had come out. I had the hysterical urge, on the Sabbath no less, to find out how he would respond to the Pew questions. I Googled around, and eventually found it: the 40-page survey of U.S. Jews.

“Ima, why are you asking me all these questions?” he wanted to know the following afternoon. I fed him ice cream to keep him seated. It was a long survey. By page 12, even I wanted out. I wondered how the hell anybody stayed on the phone for such an exhaustive list of questions, many of which, had I been asked, I would have said, “Well, if you asked me yesterday, I would have said one thing, but since you’re asking me today, I’m going to say something totally different.” Because even I, a rabbi, don’t feel Jewish in exactly the same way each day.

I typed as he answered, and here are just a few of his responses:

“Wait. What are denominations?”
“We don’t believe in two gods. AND THAT JESUS IS NOT A JEWISH GOD.”
“I have just one close Jewish friend. Her name is Hannah.”
“Of course we keep kosher.”
“I do not own a home because I am 10 years old.”

Elka Abrahamson from the Wexner Foundation, in assessing the Pew study, tells us that the question we’ve all been focused on since the 90’s — “Who is a Jew?” — has essentially been replaced by the question: “How do I Jew?” In thinking about my son’s answers to the Pew study, it occurred to me that he’s actually interested in both questions. But for him, it’s one fluid sentence. It might go something like this: “How I Jew informs if I am a Jew.” Which is why the “Surprise! I’m Jewish” student at Sabbath dinner confused him. That’s also why the Holocaust questions on the Pew survey had no impact. He doesn’t yet “do” the Holocaust. There is no action or regular practice involved. There is no community that organically draws together, at least not at his eye level, for Holocaust ritual. Jewishness is linked to the things he does on a regular basis.

For Zev, a kid growing up in progressive Zionist household that’s shomer kashrut but not terribly shomer Shabbat, the act of Jewing includes ritual practice, communal participation, trips to Israel, summer camp and practicing Hebrew daily. Because this is what he does, these are his most important benchmarks for identifying as a Jew. While he’s generally agrees with the idea that every person charts his or her Jewish identity, he is asserting, as a fully committed member of the worldwide Jewish community, that there has to be some sort of ongoing engagement with this thing called Judaism in order for it to exist deeply within a person.

Which is why the Pew questions on Iran or President Obama or even belief in God didn’t elicit much commentary from the resident 10-year-old. But the social justice questions received incredible enthusiasm. And no surprise, he had what to say about the settlements: “They don’t help with peace because they make people angry.”

I want a Pew study for kids, like the study for adults, minus the questions about who you married or if your income exceeds $150,000. While we’re at it, let’s amend the stuff about “homosexuals.” Let’s all agree to use the word “queer,” since that’s the word our children will be using once they’ve all gotten old enough to know about such things, if they don’t already.

So really now, let’s ask ourselves, how are we doing with our little Jews? Are our values their values? Is our Judaism their Judaism? In some ways, yes. In others, probably not. I think the kinder need to speak and tell us what they’re thinking about all of these issues, from God to Israel to tzedakah to the Sabbath and the Holocaust.

And do the rabbi a favor: don’t ask about Jesus.