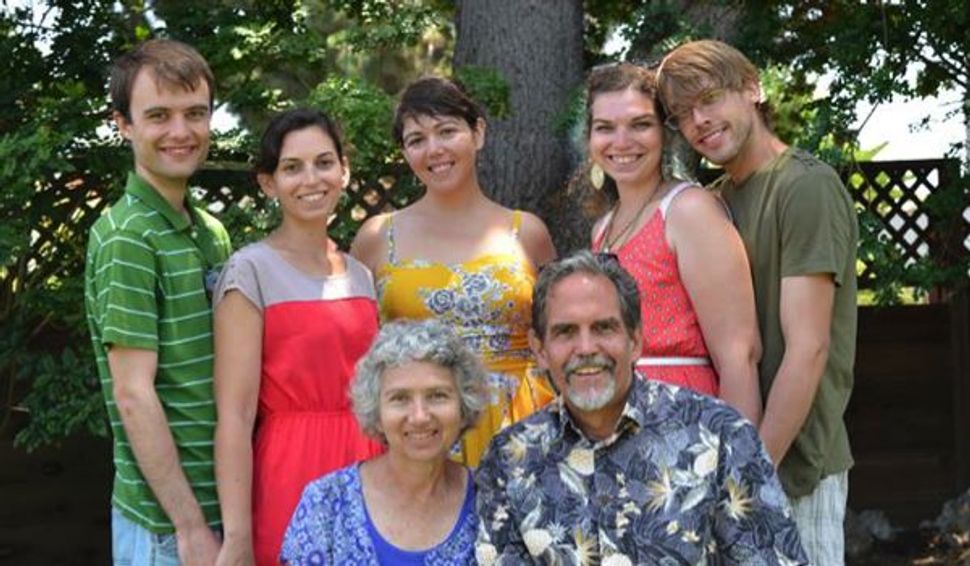 For the last few months, the holiday collision known as Thanksgivukkah has been on every American Jew’s mind, or at least their Facebook wall. The Internet has blown up like butternut squash gone horribly wrong with articles about menus, decorations, and even special Thanksgivukkah sex. It’s all in good fun, of course, but it also doubles the pressure of what can already be a stressful day of cooking and party planning. This year, it might not be enough to fall back on Grandma’s trusty mashed potatoes recipe — you have to make pecan-pie rugelach and find a menurkey.

But for interfaith families like mine (pictured below; I’m in the middle in the top row), dealing with overlapping significant holidays is not a new phenomenon, and certainly not one worth stressing over. In fact, it feels perfectly natural. We’ve done this a million times. We learned about Thanksgivukkah, smiled at an image of a black kippa adorned with a gold pilgrim buckle, and thought, “We’ve got this.”

Not because our table will necessarily look like something out of a magazine, mind you. In fact, my sister Caitlin and I aren’t even entirely sure what we’re going to do, other than light a menorah and play dreidel (we celebrate Thanksgiving ourselves at her house in Boston, because flying from our east coast homes to our parents’ residence in Utah is prohibitively expensive). Latkes might wait until Friday night, or they might not. My mother might add brisket and a cornucopia of gelt to her Thanksgiving table, or she might not. We feel comfortable waiting to make such decisions because we know that the most important part of a successful holiday blend is doing what feels natural and true to your family, at that particular moment. Whatever happens, it will be meaningful, fun and delicious.

Growing up with a Jewish mother and a Christian father, we’ve seen plenty of holidays overlap and expressed them in myriad incarnations. Because of its proximity to Christmas, Hanukkah has had the most variations over the years. (Yes, my parents call the dual celebrations Chrismukkuah.) It’s been a big deal, with piles of latkes and gallons of matzo ball soup and dreidels. It’s been a small deal, during the years of my childhood when my parents were too stressed out about money and work to do much more than light the menorah. When my sisters and I lived as adults in Utah, we threw our own Hanukkah parties that were attended mainly by Mormons. As adults my sisters and I have thrown our own Hanukkah parties — which were mainly attended by Mormons, since we lived in Utah at the time.

My favorite approach to the Festival of Lights is a glorious mashing of traditions. The best years are when Hanukkah falls over Christmas and after attending Christmas Eve service, we come home and make latkes and light the menorah and drink wine under the sparkling tree. Sometimes we sing holiday songs like “Frosty the Snowman” but my sisters and I insist that our family avoids the religious carols. We got enough of the Jesus story at church, and since none of us believe that he was the messiah, it feels right to leave him there. My mother likes to lead a rousing chorus Adam Sandler’s “Hanukkah Song,” too.

I like this approach because it feels uniquely reflective of my identity. Some may argue that both holidays are watered down, and maybe they are, but in the moment I don’t notice the subtractions, only the additions. Many of my other favorite holidays — both religious and secular — have been adapted from the traditional in some way or another to reflect mine and my family’s own identity. We often spend Christmas hiking instead of at church, and have been known to celebrate summer solstice more intensely than Independence Day. My sister Caitlin’s birthday is on Halloween, so that’s a mashup, too. And the older I get, the more important celebrations that reflect identity seem to be, and the less important ones that are done purely for ritual’s sake become. (For example, the Easter story doesn’t speak to me, and I haven’t celebrated the holiday in any form since high school.)

So I’m excited about a new form of Hanukkah — one with turkeys, pies and statements of gratitude. It feels natural to try out this combination. My comfort with the concept of blended holidays lowers the pressure for pulling off the novel table perfectly, but also gives with the confidence to know that regardless of intricacy of decorations, my family’s holiday will reflect our personalities in a natural, meaningful way.

Hanukkah celebrates a light that did not go out. And whether or not that light’s lit in a traditional menorah or in a turkey’s tail feathers, I believe that the most important way to keep the light shining is to celebrate the holiday in a way that feels honest and relevant.