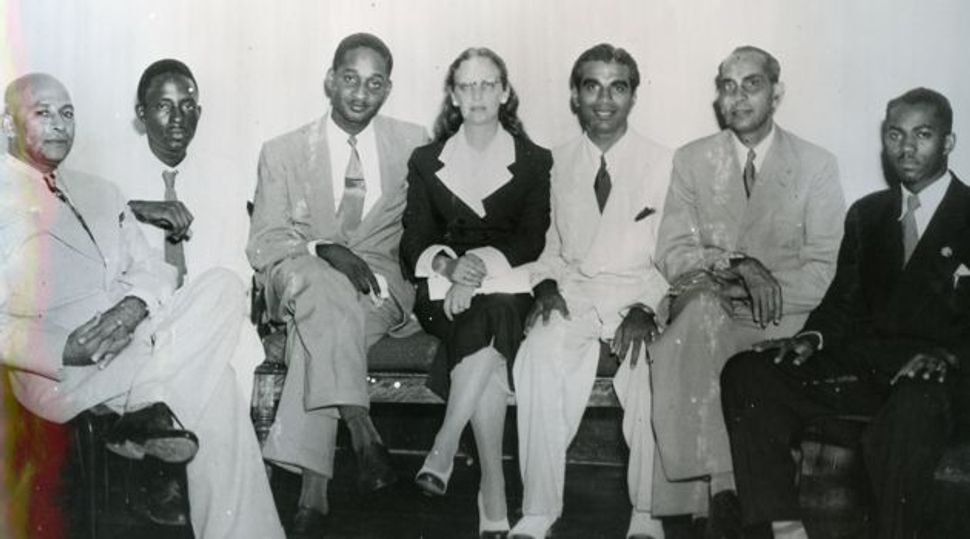 Throwback Thursday is a weekly photo feature in which we sift 116 years of Forward history to find snapshots of women’s lives.

Born in Chicago, Janet Rosenberg was the first female president of Guyana, the country’s first Jewish and U.S. born leader and the third woman elected as chief executive of a country in the Western Hemisphere.

Rosenberg met her husband Cheddie Jagan, an Indo-Guyanese dental student, while she was a student nurse at a Chicago hospital. They married in August 1943 and by December had moved back to Guyana where they co-founded the People’s Progressive Party which opposed British colonial rule of Guyana. In the 1953 photo above, Rosenberg is in the center with Jagan to the right of her, surrounded by other founding members of the party.

Rosenberg and Jagan were also active in the labor movement, and she worked in his dental clinic as a nurse. In 1946 she founded the Women’s Political and Economic Organization in Guyana. She was awarded Guyana’s highest national award, the Order of Excellence. After a brief stint as Guyana’s prime minister, Rosenberg served as president from 1997 to 1999.

Long involved with the literary and cultural life of Guyana, she edited poetry anthologies celebrating Guyanese poets and focused on publishing works on Guyanese culture for children and adults.