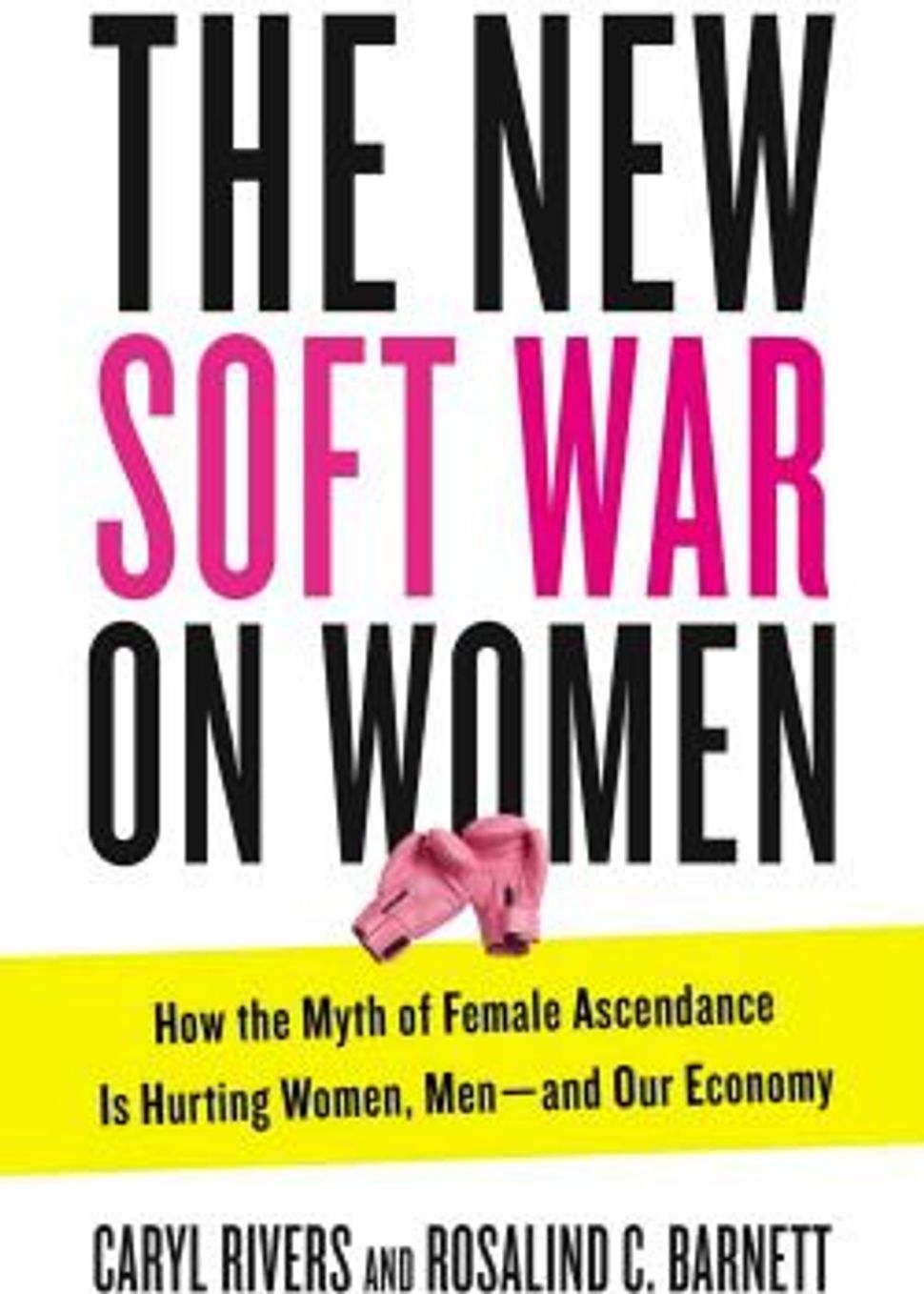 In their latest book, “The New Soft War on Women”, academics Caryl Rivers and Rosalind C. Barnett take on the notion that the end of men is imminent — as posited in Hannah Rosin’s book. They argue that while women have made some gains, particularly early on their careers, we are still a long, long way from parity.

The Sisterhood emailed with Rivers and Barnett about what women are still up against and what we need to do about it.

The Sisterhood: As you argue in your new book, it really isn’t the “end of men” after all. Why do you think that narrative has caught so much fire?

Rivers and Barnett: For some time, we noticed, whenever women make an advance, there’s an alternate story — it must be that men are failing. The idea that both men and women can succeed and thrive at the same time is a hard one for society to wrap its arms around. So when girls started to do better at math, we had a rash of stories about boys failing that became the national narrative of “The Boy Crisis.” Tough economic times for everybody means that men are feeling the pain. So it’s “natural” to look for something or someone to blame. Women become the culprit. 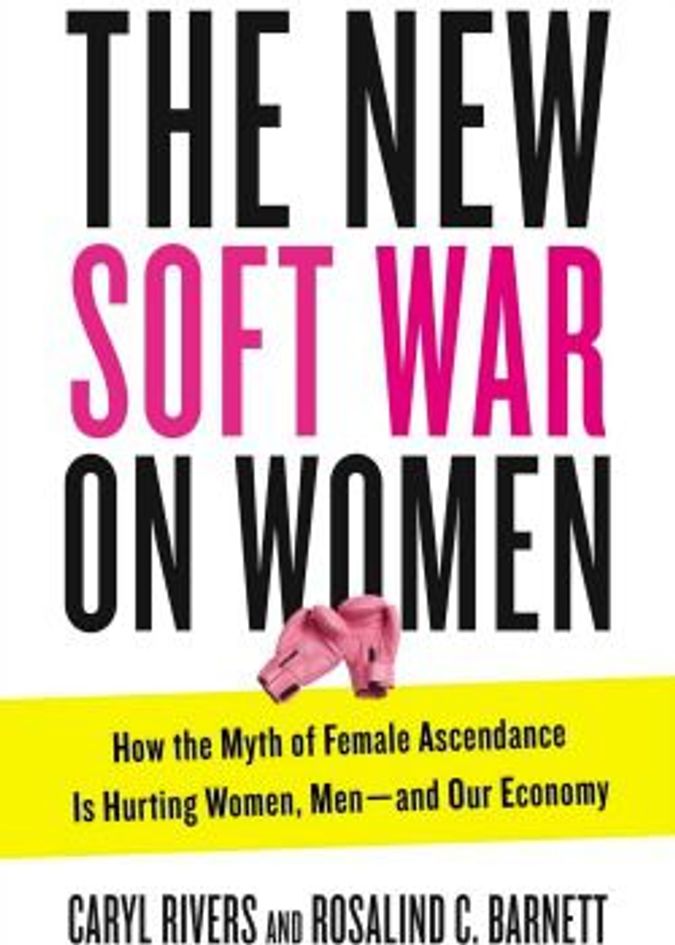 How does the belief in female ascendance harm women?

Research finds that when women believe that all the battles have been won and discrimination has ended, they fall into a “rose-colored-glasses” syndrome. Ignoring the real but more subtle discrimination that does exist, women blame themselves when they don’t advance. The sense that all discrimination is over and feminism is an outdated artifact of the past leads women to laser-focus on their own careers, believing that the world is fair.

But the real problem is subtle discrimination, along with deeply entrenched gender stereotypes. Clearly, in this situation, self-improvement will have only a limited payoff for getting into a top job.

In the book you go over how even though women have made great advancements in education and at work, those gains have not led to gender equality in terms of pay or influence. What are some of the things holding us back?

What holds women back? Deeply entrenched stereotypes that women don’t have “the right stuff” to be leaders, that they can’t make decisions, that they are too emotional, even irrational. They don’t have the drive to succeed. They have good social skills but they’re short on toughness. They naturally “take care” but can’t “take charge.” Women who are or may be mothers are seen by both men and women as less competent and less committed to their careers. Therefore, they are seen as less desirable employees. They pay a huge “motherhood penalty” that can be as high as a million dollars.

You also look at the type of women’s stories that appear in magazines and newspapers and suggest that many of them are based more on myth than fact. These include sad single women, sad feminists, sad children of working women and the infamous opt-outers. Why do you think the media keeps missing the mark when it comes to women’s stories?

It’s very hard for us to believe in the story of women who are good at their jobs and enjoy rich family lives. We all know these women — they are all around us. But their lives get little attention from a 24-hour sensationalistic media that thrives on bad news and simple explanations.

Also, the image of the 50s family, the breadwinner dad and the stay-at-home mom, is etched into our national consciousness as the way things “should be.” That model is 50 years out-of-date, but maintains its hold on our imaginations.

You write about the fact that only around one-fifth of the computing workforce was female in 2011. This is alarming because this is anticipated to be a large growth sector in the coming years. What is holding women back in this area?

Girls start to believe that math is a “boy thing” in the very early grades. Even girls who like math and are good at it start to lose interest and move away. From the earliest years, girls’ experience with math is very different from that of boys. Teachers, parents and girls themselves frequently buy into the notion that math is not for them, and they turn their attention elsewhere. This has nothing to do with girls’ actual ability. In fact, Elizabeth Spelke, a professor of cognitive psychology at Harvard, in a series of studies, showed conclusively that girls and boys develop the five basic cognitive skills for math at the same age.

As girls grow older and go to college, these same stereotypes follow them. In 2012, Yale researchers found that science professors at American universities believed female students were less able than men. The professors were less likely to offer talented women mentoring or a job.

You write about the rise of the “glass escalators” and “glass cliffs.” Please explain.

What is the glass escalator? Men are now gravitating toward female-dominated occupations, according to a recent analysis of census data by the New York Times. The Times analysis showed that from 2000 to 2010, occupations that are more than 70 percent female accounted for almost a third of all job growth for men, double the share of the previous decade.

And as men move into what used to be female territory, they are doing very well, better than women in fact. In the 20 most common occupations for women, according to the Washington, D.C.-based Institute for Women’s Policy Research, men out-earn women in all but two.

White men in these fields are climbing aboard what’s coming to be called the “glass escalator.” They get a double boost from being white and being male and rise more quickly than equally qualified women in position, pay and benefits. Ironically, the glass escalator only seems to operate for white men in female-dominant jobs when they are supervised by women or members of minority groups.

What is the glass cliff? It’s a phenomenon that foretells danger for women who climb too high.

Female business leaders are more likely to be appointed to powerful leadership positions when an organization is in crisis or high-risk circumstances. It’s typically a no-win situation for women when a company’s circumstances are so precarious that only a Hail Mary pass will save the day. If the new female leader fails, people mutter, “See what happens when you put a woman in charge.”

These women are set up for failure — blamed for negative outcomes that were set in motion well before they assumed their new roles. To give a few examples, Carly Fiorina (Hewlett Packard), Kate Swan (W. H. Smith) and Patricia Russo (Alcatel-Lucent) were appointed to top positions at a time of tumbling share prices. All were fired or pushed out of their jobs.

What one or two changes to the law or workplace culture do you think would have most impact on moving us closer to equality?

Change one: New reports issued in 2013 find that the numbers of women on boards of Fortune 500 companies have not changed one iota since 2004. After a lot of talk about gender diversity, there is no progress. Ten years of stalemate. We need to change the dynamic. How do we do this?

One way is to study the examples of our trading partners in other countries. In Germany, the top political parties have just struck a deal. They will require that all companies listed on a stock exchange fill at least 30 percent of their board seats with women. It’s a trend that’s growing around the globe — with the U.S. very far behind.

Why does this matter? Because the drive to get more women into top spots in companies is based on cold hard numbers, not on a touchy-feely argument about “fairness.” The think tank Catalyst found that companies with the most female board directors earned a 26 percent higher rate of return than those with the fewest women. McKinsey reported that companies around the globe with more women on their corporate boards far outperformed the average company; profits were 56 percent higher.

Change two: We need to educate CEOs, managers, and anyone with hiring or firing responsibilities about the deep gender stereotypes that still thrive, albeit in newer forms.

New research finds that 90 percent of companies around the globe have diversity programs on their books, but they are ineffective. These programs often lack clear goals, evaluation and enforcement, and less than half have criteria that allow for them to be evaluated.

Critically, there’s little commitment to the programs in the C-suite, and it gets weaker as you go down the organizational ladder.

This can change, according to psychologists Brian Welle and Madeline Heilman, who studied the problem. Companies need to educate managers so that they recognize gender discrimination as a problem. They need to know “what it is, how it happens, and how they can prevent their own stereotypes from biasing their actions.” Stereotypes are a major barrier to women’s success, and they work in many and often subtle ways. Nothing will change until mind-sets change. Welle and Heilman say that education about stereotypes is critical for companies and will “have a positive impact on the bottom line of their businesses.”