Getting Women to Mikveh, Snow or No 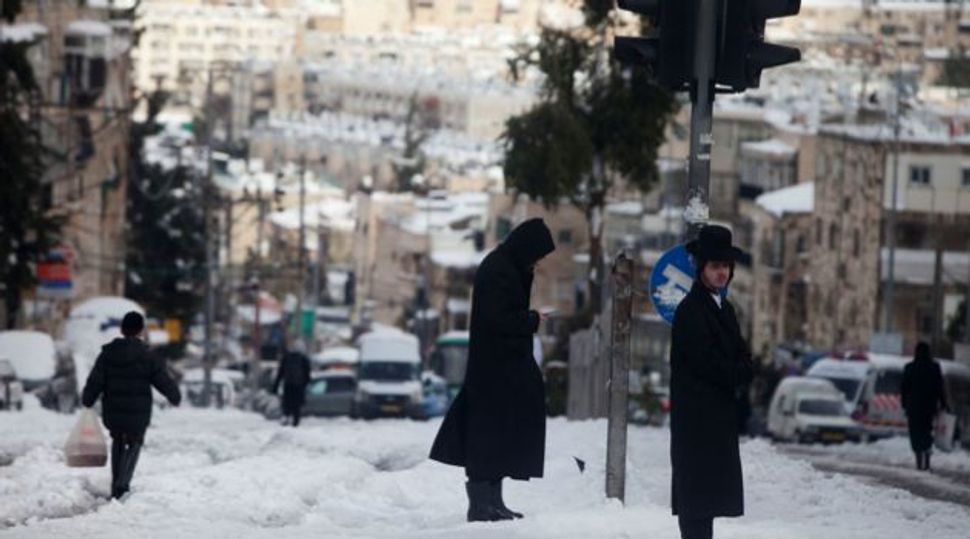 Jerusalem residents were told to stay off the streets during the recent, highly unusual, heavy snowstorm. Only plows and emergency vehicles were allowed to get through.

And only in Jerusalem would a “Purity Mobile” count as an emergency vehicle.

Ynet reported that Taharat Habayit (purity of the home), a Haredi organization, sent a 4×4 jeep-like vehicle out in treacherous road and visibility conditions last Thursday and Saturday nights to pick up women and take them to local mikvehs so they could immerse immediately following their monthly periods of ritual impurity.

“The organization’s top priority is raising awareness to the importance of the family purity mitzvah. We see it fit to operate even with such serious conditions like rainy weather and heavy snow, so that as many women as possible adhere to purity laws and manage to reach the mikveh in the easiest and most convenient way,” said Taharat Habayit chairman, Rabbi Yehezkel Mutzafi.

Not surprisingly, news of the Purity Mobile’s making its rounds during the storm generated much discussion in the blogosphere and on social media, in particular on the Facebook page of Joel Alan Katz, who edits the Religion and State in Israel blog. Some comments were critical, others were supportive, while still others were expressions of shock that something called a “Purity Mobile” even exists.

Leading the critical camp, was Shmarya Rosenberg at Failed Messiah, who wrote, “At a time when Israel’s government was warning Israelis to stay indoors and off Jerusalem’s treacherous, snow choked roads, a haredi organization ignored those orders and went out in a jeep, not to rescue trapped motorists or bring food and other necessities to trapped elderly Israelis, but reportedly to do a mitzvah it deemed more important – bring women to mikvahs so they could immerse and remove the ritual ‘impurity’ caused by their monthly menses and then have sex with their husbands without sinning.”

“To me it appears that their ‘raising awareness’ is translated in action as uber-pressure on the women to be driven around at all hours away from family at home in unsafe and hazardous roads and weather conditions to get to a mikveh, rather than a safer alternative which is obviously to wait out the storm a few days until roads are cleared,” posted one Facebook user.

Displeased with people posting snarky comments suggesting that the Purity Mobile should play MC Hammers “U Can’t Touch This,” or that it’s mission should be referred to as “Booty Call of Duty,” one person suggested that there may be pressing issues, such as fertility problems and ovulation timing, compelling a woman to go out to the mikveh in a snowstorm.

“Are all women just pawns being pressured into doing things against their will?” he wrote. “Do any of you have any friends who have dealt with fertility issues? Do you realize how helpful this service could have been for them?… Does everything immediately need to be brought to the crassest level?”

One woman pointed out that it would be wrong to assume that women were using the transportation service only because of pressure from their husbands. “I think it’s nice to offer [the service]. I mean it’s not like they grabbed the women and stuffed them into the vans. Why is it about men? Lots of women don’t want to wait either,” she suggested.

Finally, many thought that the lack of tznius (modesty) associated with the branding of the service was the main problem. (A “Taharat Habayit” sign is plastered on the side of the jeep, and was presumably especially noticeable when so few other vehicles were on the streets.).

Katz’s request for names of women who used the service during the storm went unanswered. “Sorry…, if I did, I wouldn’t post it on FB. Privacy settings,” wrote one woman.

One poster summed it all up much of the debate with: “A bit too public for most women and just seems to pander to men who don’t want to wait a few more days for some nooky.”

Getting Women to Mikveh, Snow or No