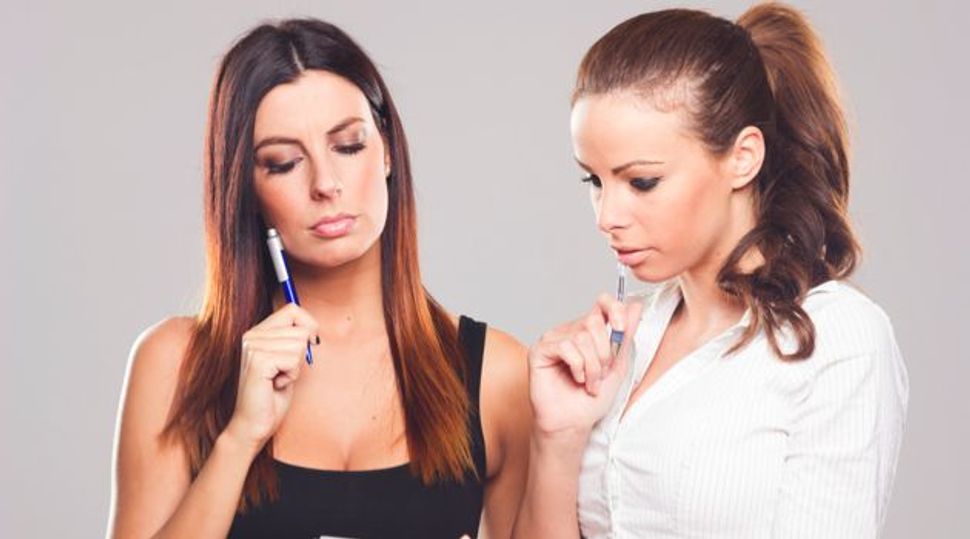 The New York Times recently ran a story about an experiment testing the competitiveness of the human female. For it, researchers had a woman, who “embodied qualities considered attractive from an evolutionary perspective,” interrupt a lecture about female friendships. Sometimes she was dressed casual, in a T-shirt and jeans, and other times she wore a low-cut blouse and a short skirt.

Their researchers conclusion? Stigmatizing female promiscuity, what the kids are calling slut-shaming, is something women, and not men, do to other women. Why?

“Sex is coveted by men… Accordingly, women limit access as a way of maintaining advantage in the negotiation of this resource. Women who make sex too readily available compromise the power-holding position of the group, which is why many women are particularly intolerant of women who are, or seem to be, promiscuous.”

So, in summary, judging other women for dressing risque is all about our competition for men.

I’m not so sure about this.Their research might be sound, but their explanation as to why women react with hostility towards scantily dressed ladies feels a little retro.

Their hypothesis is built on the assumption that women can’t but help but view one another in terms of their value in the eyes of men. Or, as Soraya Roberts put it over at the Daily Beast, “when it comes to competition, the focus continues to be on men, even where women are involved. Science says that when ladies compete it’s to land a dude or to look beautiful (to the same ends), rather than to, say, land a bonus or look professional.”

So I’d like to offer another completely personal, totally untested, highly anecdotal way to look at this. It isn’t scientific, but then again, this wouldn’t be the first time someone inserted their individual bias into a scientific study. The difference here is that I’m aware of it.

They study’s authors assume that the end goal for most women is a man, and we have to play our sexuality card wisely as it is “a limited resource that women use to negotiate with men, and scarcity gives women an advantage.”

Well, at the risk of sounding slut-shamey, I am going to admit that I do sometimes feel hostile towards promiscuously dressed women. (It isn’t like I have a checklist of things that I consider trashy. Let’s just say that I know it when I see it, and that if I did going panty-less would definitely be on there.) But this has nothing to do with me worrying about them messing up my game with other men.

Instead, it is because as a feminist I am part of a movement that aims to create a world where women don’t view their sexuality as their main source of power and they don’t view their power as individuals in relation to where they stand with men. When I see someone who is clearly dressed to arouse the opposite sex in an inappropriate setting (bars being an example of an appropriate one, but even there, there are limits to how much exposed flesh I can take), I can’t help but feel like she is taking us a few steps back to a time when the best things women have going for us are our bodies.

I can’t say that I know that any of the women in the study felt this way. But it would be nice if the researchers, as portrayed by the Times story, honored the possibility that women feel hostility towards other women who, they believe, reinforce the status quo by giving power to men, when really these women just want that power for themselves.