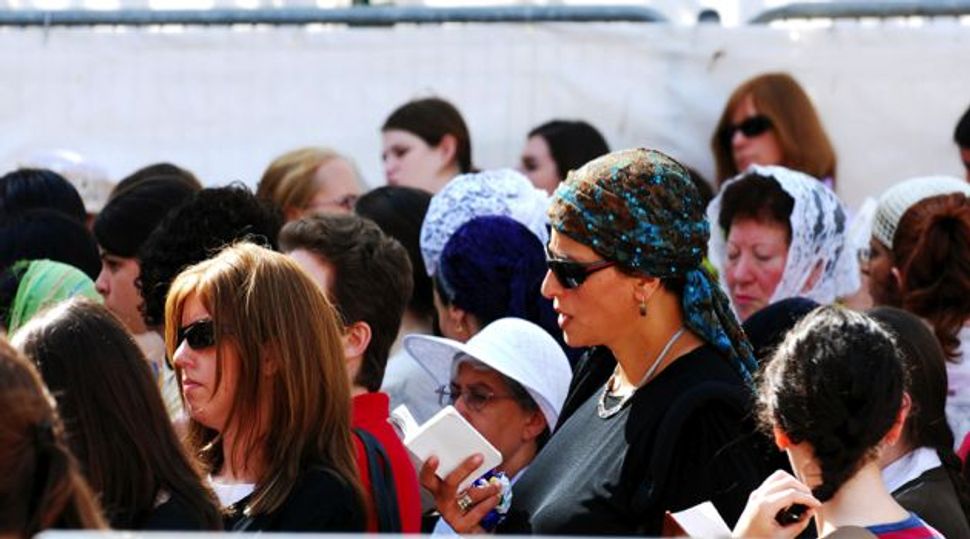 Editor’s note: This post is the third in a three part series answering the question, “How should Jewish feminism change in 2014 to be more effective?” Read the first post here and the second post here.

It’s no secret that women have a hard time supporting one another. Sure, we’ll bring each other lasagnas and casseroles when we’re sick, and we’ll give each other warm hugs as we listen to one another kvetch. But real support, the kind where we stand behind one another and say, “This woman is my leader; I trust in her vision, and I am willing to follow her,” well, not so much. As Facebook Chief Operating Officer and “Lean In” author Sheryl Sandberg has pointed out, when women are successful, we all tend to attribute their success to luck or to pluck rather than to intelligence and worthiness. The more women have ambition and vision, the less they are considered likable, by women and men alike. When a woman does well, she tends to hear things like, “You must be lucky,” or, “You’re obviously persistent,” as opposed to, say, “You’re a skilled, intelligent visionary.” We tend to be more comfortable with women as soft, submissive and servile than we are with women of power.

This is true in the Orthodox Jewish community, as well — perhaps even more so than for the rest of the Jewish community. The Orthodox community is simply not accustomed to having women at the top as authority figures, lay leaders, professional leaders or religious leaders. This is perhaps connected to the nonexistence of women pulpit rabbis in Orthodoxy. After all, Orthodox Jews are trained from early childhood to associate leadership and closeness to God with a complete absence of women. The socialization starts in synagogue, for sure, but it doesn’t stop there. In the Forward Salary Survey, for example, which looks at gender and compensation in communal leadership, one is hard-pressed to find a single Orthodox woman in the entire list. By contrast, the top earner is a Jewish man: Richard Joel of Yeshiva University. So Orthodox Jewish men do not shy away from communal leadership — it’s only women who have trouble being cast in those roles.

Jewish women — and yes, even Jewish feminists, even Orthodox feminists — need some rethinking and retraining in how we support one another. We need to take a page from Sandberg’s playbook. Orthodox women face most of the same issues that she has been talking about, plus more. I would argue that the very qualities that make Orthodox women so remarkable — the ability to manage regular weekly four-course gourmet meals for 20 while working full time and helping a bunch of kids with homework and soccer — also keep us from raising our chins. We’re so busy managing the pitchifkes, or day to day items, of our lives that we forget to see ourselves and other women as great leaders.

It’s time for Orthodox women to unlearn this. We need to create social and communal structures that teach us how to empower one another, how to back one another, and how to form communal-feminist scaffolding for one another’s success and advancement. We need to unlearn an entire lifetime of conditioning that has made us doubt other women’s worthiness. We need to practice letting go of our dismissive, small-minded micro-managing and start embracing words and practices that strengthen and bolster one another’s work and vision. This does not happen automatically or naturally; these are behaviors that need to be taught and learned. It’s about undoing decades of internalized sexism. That takes work.

One of my primary goals for 2014 at the Jewish Orthodox Feminist Alliance, where I am executive director, is to create “community circles” of Orthodox women around the country. What I’m envisioning is a cross between a 1960s-style feminist consciousness-raising group and a 2013 Lean In circle. It’s a framework in which women will gather to hear from female experts and scholars on issues related to the status of women in Judaism, and use these encounters as a space to explore change within their communities. They would cover such topics as women in synagogue; women in leadership; feminist ritual; agunot, or “chained” women; education, and more.

Through these regular meetings, participants will empower themselves by empowering others. They will work on social change while learning to support change agents. They will practice putting their weight behind one another’s vision for change while finding their own voices of power. It’s about the idea that the group is strengthened when the ties among us are strengthened.

After all, if women are not able to support one another, then how can we teach men to be led by women?

Elana Sztokman is the executive director of the Jewish Orthodox Feminist Alliance.