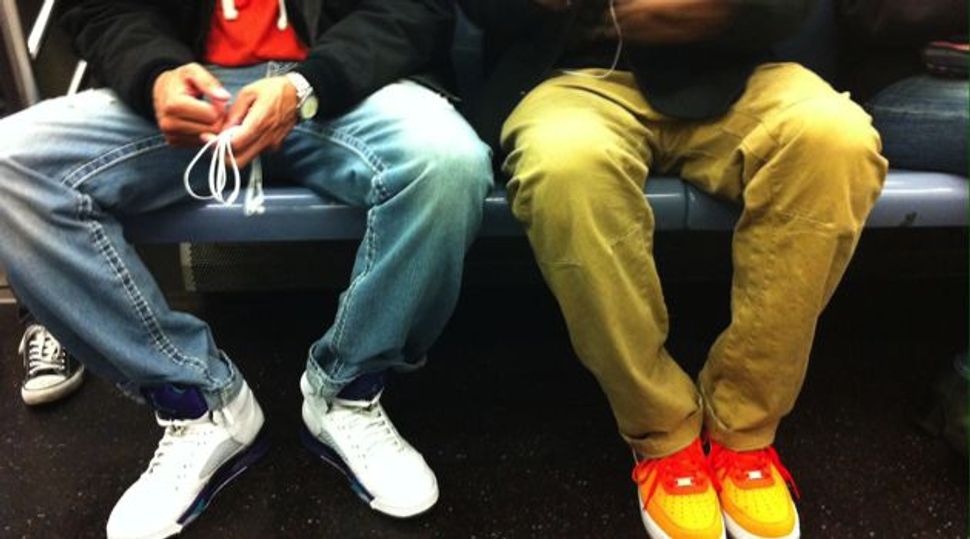 Tzipporah, a Modern Orthodox woman living in Manhattan, just couldn’t deal with the way that people misbehaved on the New York subway. She started taking surreptitious camera phone photos of the worst offenders — men who insisted on sprawling out onto multiple seats, even when the train was packed. She began posting the pictures on a Tumblr she created called Move The F**k Over Bro.

Soon, the blog grew and Tzipporah (she requested that the Forward use her first name in order to preserve her privacy) began getting submissions and responses from all over the country and even from places as far away as China and Brazil. But she also started getting tons of hate mail. She granted her first-ever interview to The Sisterhood.

“It’s a scary and not always smart thing to do, taking pictures,” Tzipporah admits. She has faced harassment offline as well, including a recent incident when she stood up for a woman who was being heckled on the train by guys who she’d asked to move over and free up a seat. “But I think [Jewish people] have an obligation toward social justice.”

Tzipporah, who was raised by a single father, credits him for making feminism an elemental part of her life. “He encouraged me to look at women as complex individuals. He has always been really proud of me,” she says. “Raising up Jewish girls is like my favorite thing. The idea that religion is misogynist bothers me.”

She averages hundreds of emails a day, mostly angry ones. “The strong, serious majority of my mail is hate mail. I have 172 messages right now and easily 100 of them are some guy calling me a bitch. But I get a lot of women writing in saying ‘thank you, this is really great, I thought I was imagining it.’”

So why does something as basic as shaming a guy for sprawling his legs out over two or three subway seats, even at the expense of elderly people or pregnant women, make so many people angry? Tzipporah blames one specific concept: male privilege.

“Women write in about how their brother sits on the couch and takes up the whole thing,” she says about some of the blog’s positive side effects. “It’s cool to think I might influence someone’s way of thinking or make them realize there’s an issue. So many girls are so resistant to the idea of male privilege. We teach girls from birth to be quiet and subservient and take up as little room as possible. I was like that too.”

Tzipporah also notes how many of the blog’s most regular rebuttals are themselves drenched in privilege. For example, the people who tell her to just quit taking the subway and drive everyday instead never stop to think about whether she can afford a car in the first place. “The things people come up with to dismiss what I am saying is astounding. They will go to any length,” she says. “It is public transportation. We’re not taking it for fun. It is such privileged arrogance to say ‘then just don’t take it.’ Maybe we could teach men to treat women better rather than tell women to just remove themselves from the situation.”

Although Tzipporah does use her real first name on the blog when responding to questions and comments, identifying herself with a recognizably Jewish name has brought on a whole new round of ways for Men’s Rights Activists (MRAs) to lash out at her: “Sometimes I get people who recognize that my name is Jewish and send me ‘jokes’ about burning me in a concentration camp.” They also accuse her of ‘censorship’ when she writes the word “G-d.” Because of that, she does not use her last name, give specifics about where she lives, or mention what she does for a living.

Still, Tzipporah is only more encouraged every time she gets a critical email or hateful reply. She knows that feminist work has never been easy or without criticism. And she won’t let anyone intimidate her off of public transit, either. “I can never leave New York. I am going to stay right here.”

*Photo credit Move the F**k Over*