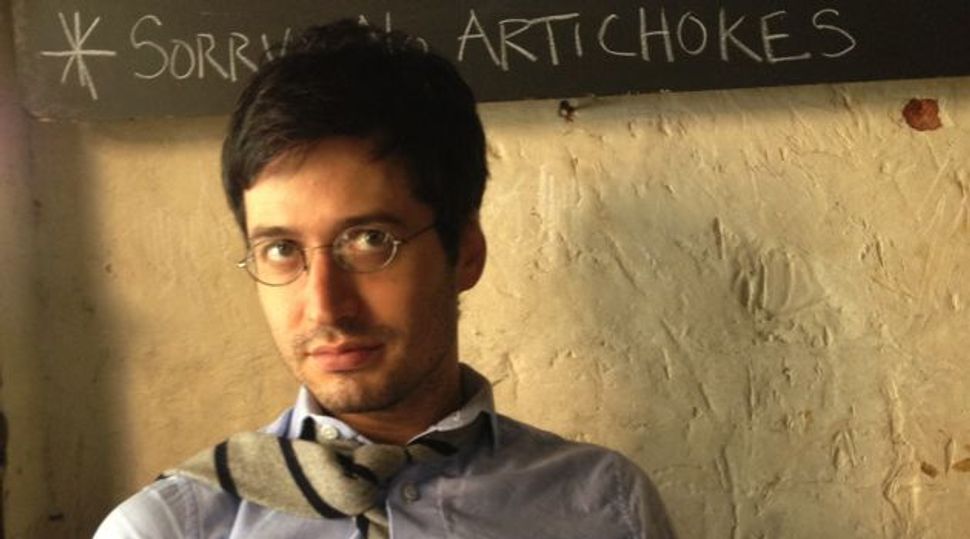 Three years ago, Toronto-born Daniel Friedman was a newly minted architect whose livelihood evaporated when the economy crashed.

Today, hundreds of people are living in Friedman’s designs — but sewing machines and measuring tapes are his work tools.

With business partner David Kusy, Friedman runs Bindle and Keep, a New York-based bespoke mens- and womenswear company whose custom suits and shirts are drawing a rabid following. Meticulous tailoring drives the company’s success. But Bindle and Keep also makes house calls, which has helped it carve a distinctive niche in a fiercely competitive field.

Friedman, 34, spoke to the Forward’s Michael Kaminer about growing up Orthodox, the long thread connecting Jews and apparel and the former Jewish archivist who helped spark Bindle and Keep’s accidental gay following.

Michael Kaminer: You were an architecture major who never studied fashion. How did the business start?

Daniel Friedman: I was an undergrad at McGill in Montreal, and studied architecture at Penn. I got another Master’s degree at Columbia, and thought, “I’m moving up in the world”. Then the economy fell out. I’d graduated at the top of my class, had no money, and was living on a friend’s couch.

At Penn, I’d had a classmate whose family had a small factory. They were retiring. My classmate and I always joked that if architecture didn’t work out, we could go into clothing. I’m a small guy, about 5’6”, and I need to wear custom suits. When the economy went to hell, we looked around at the custom business and said, “Let’s give this a go. We can do it better.”

How big has the business become?

Even though we had a rough start — it was August of 2011 when we launched — we’ve sold over 1,400 suits since then. And a lot of clients will also buy shirts, or pants, or an overcoat. Our average suit ranges from $695-$1800. We have eight people working in different capacities, including marketing guys, suit runners, and three master tailors. You don’t need a whole facility to do this. We outsource some work, but nothing’s done by a gluing machine or anything automated, aside from electric sewing machines.

Did your Orthodox upbringing influence your perception of how a great suit should look?

Maybe growing up and going to shul had something to do with my awareness of how a suit should look. But my community wasn’t my template for how we make suits for our clients. We do get a lot of Jewish clients because our suits are shatnez-free. [The Torah prohibits shatnez, which is the wearing of any garment or fabric containing both wool and linen.] Once someone gets a suit, they wear it to shul, and people want to know where they got it. Our client base from the Jewish community in New York City and the Five Towns is 85% word of mouth. People talk. They need to know where to get suits, but don’t know where to get them. Because we travel to them, we’re a pretty attractive option.

There’s a long and rich history of Jews in the schmatte business. Do you see yourself in that lineage?

Geographically, it makes sense where Jews have come from, where textiles were a big thing. It’s funny — I come from a family of Holocaust survivors. I grew up reading “Maus,” and my first stories were stories about the Holocaust. A lot of our sales and in-house tailors are Polish. They’re a bit younger than my grandparents were. There’s an awareness we all have of our respective backgrounds.
My family’s history did keep me going when things were tough. I thought, “I come from Holocaust survivors. People got through much worse than this. People rose from a lot lower and much larger challenges. If they can survive all that, no way I can’t survive being broke” That was a big motivator and a kind of mantra.

You’ve been getting a lot of attention for a female clientele buying your men’s suits. How did that specialty develop?

We hired Rachel Tutera [who blogs as The Handsome Butch]. She’d worked at the Jewish Archive on 16th St. as an archivist. She reached out to me, and wanted to get into custom suiting that would accept her for who she is. When you start a company from nothing, you’re more apt to give people an opportunity. She started inviting clients from lesbian community. Our house calls worked well for them, too. They didn’t have to expose their gender identity or whatever to a salesguy at a men’s store.

It’s not something we’d planned. We’d expected to target Wall Street and Jewish clients, because they buy a lot of suits. We thought this might scare away our clientele. But if anything, it’s only encouraged business. And it makes us better at doing men’s and women’s suits.

Which tailors do you admire?

Initially, it was Thom Browne. I like that very short jacket with short pants. I went for that androgynous, almost feminine looking suit on a man. Now, I don’t subscribe to it as much. I like the Tom Ford look a bit better. It’s more mature, and the jacket’s a little longer. Styles are changing. Maturity’s the way to go. Shoes are getting pointier, but not silly-pointy. People are tired of wearing suits that look like they came out of H & M. People are looking for work, and want to look like they have jobs.

What does Bindle and Keep mean?

A bindle is the bag hobos carry. The keep is the most solid part of a castle. Hobos carried bindles because they were looking for work, but in transition. So were we. The idea was I was dressing like I had a great job. And I realized our clientele would want that too. We’re all in the bindle stage, trying to get to the keep stage.

What’s next for the business?

We’re going to move across the country. Because we’ve developed this business model — and I hate for people to copy us, but they will — it doesn’t take a lot to move into different communities. With a book of fabric, and people trained in our proprietary fitting system, we can move into any market. Eventually, we want to move into Israel and Canada. We want to get people in suits around the world.