Roe at 41 Marks a Time of Limited ‘Rights’ and Access 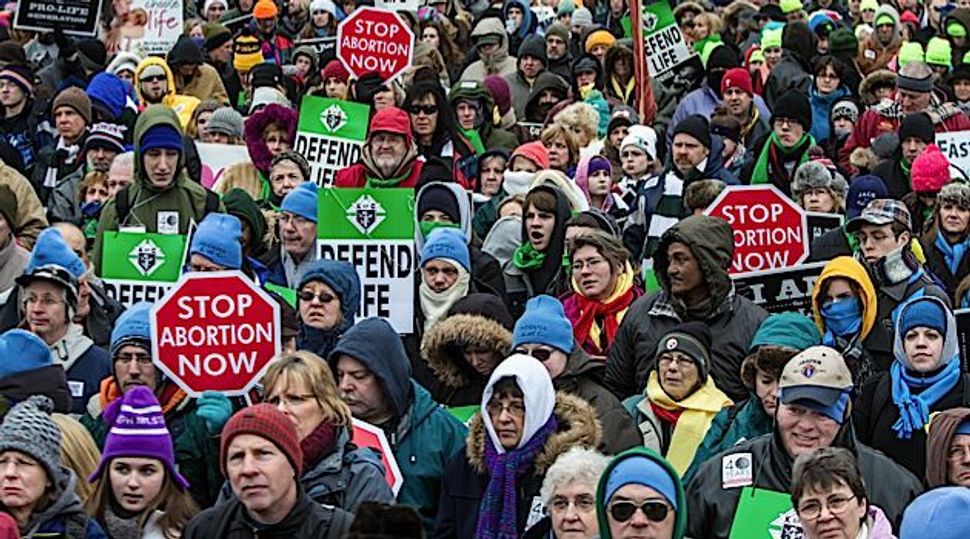 Roe v. Wade turns 41 today. The past few years have witnessed the landmark Supreme Court, decision, which legalized abortion in 1973, become reduced to a shadow of itself, as state after state passed restrictions which winnowed down the ability to access abortion.

We have covered these developments again and again at the Sisterhood. The logic goes like this: add in waiting periods and parental consent laws, harass or restrict rural clinics out of existence and don’t allow insurance-covered abortion for those on public assistance, and what remains is a “right” that’s a right in name only for many who seek abortion care.

Jewish women have long been at the forefront of pro-choice activism over decades of feminist foment, from before Betty Friedan right through our current age of digital feminism. Today Ilyse Hogue, the new leader of NARAL Pro-Choice America (and one of the Sisterhood’s 2014 Jewish Women to Watch), has written a feisty op-ed in Politico called, “2014: The Year the Pro-Choice Crowd Fights Back.” Hogue notes that three years of anti-choice overreach is finally creating a backlash. “In 2013, we saw a movement starting to embody the old adage that the best defense is a good offense,” she notes, referring to grassroots efforts in states like New York to enshrine abortion rights more fully. Still, she writes, “It will take time for this shifting momentum to result in a full sea change.”

Hogue also writes that voters have wised up, and know that economic security and social issues can no longer be pried apart by politicians.

Gone are the days when conservatives could marginalize abortion access as a social issue and claim elections hinge on economic matters, especially with women driving the margin of victory in so many elections. Women in this country know that our economic security depends on our ability to decide when and with whom we have families.

Another awesome Jewish feminist, Jessica Arons, makes that economic and social connection in an op-ed today, noting that the fight against poverty must include full reproductive freedom for low-income families. And that means a repeal of the odious Hyde Amendment which forbids Medicaid coverage for women seeking abortions.

“The woman struggling to pay for an abortion is also the woman trying to find or maintain employment, avoid eviction and feed her children,” writes Arons. “…abortion opponents have exploited poor women’s economic vulnerability as a way to interfere with and punish their decision to have an abortion. “

The good news is that so many contemporary abortion-rights activists are training their sights Hyde rather than accepting it as the status quo. Instead, our movement is turning towards a vision of reproductive freedom and justice that sees abortion as a part of a broader landscape that prizes social equality, economic justice, individual freedom of conscience and so many other values that progressive Jews have always held dear.

Roe at 41 Marks a Time of Limited ‘Rights’ and Access