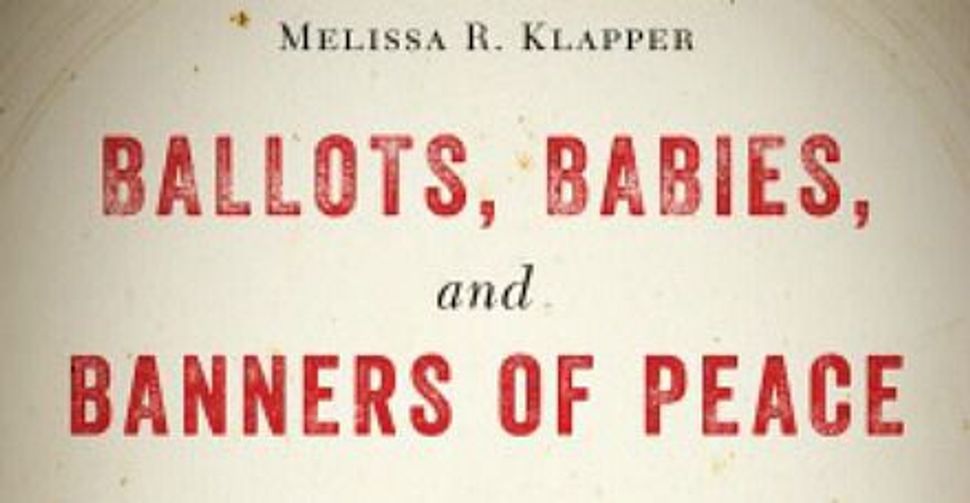 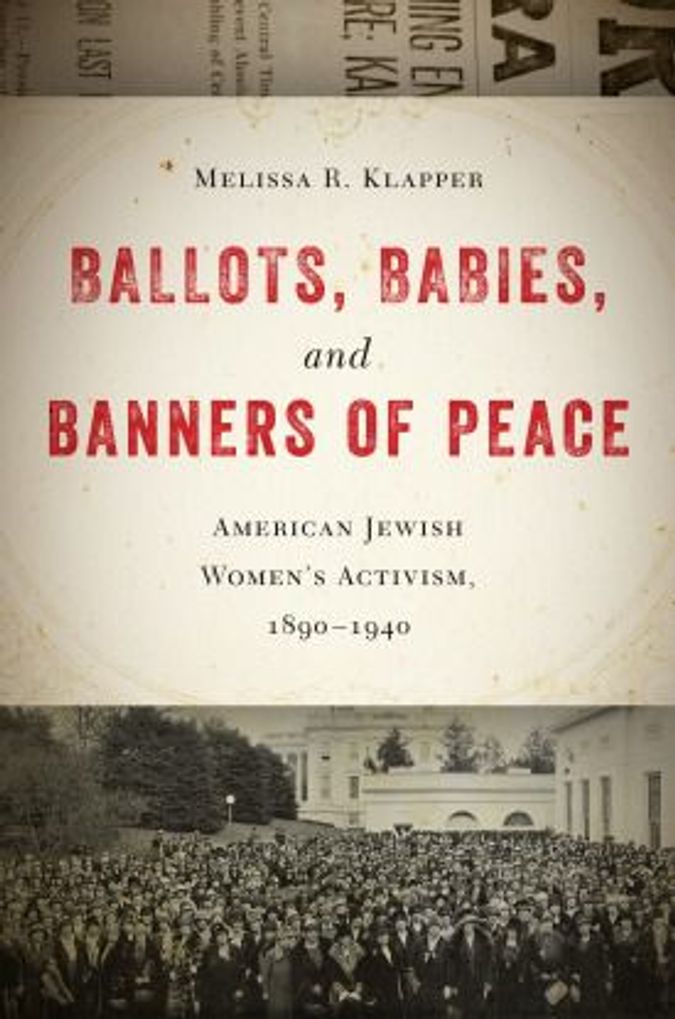 The Sisterhood recently spoke with Prof. Klapper about the birth control battles of the 1870s, the Jewish push for suffrage, why peace was once considered a women’s issue and the Jewish women activists you really should know about.

THE SISTERHOOD: Why did you decide to write this book?

PROF. KLAPPER: From my early days as a graduate student in American women’s history, I was disturbed by the near absence of Jewish women from the larger narratives of American women’s lives and history, with the possible exception of the labor movement. Even historians who acknowledged the outsize role American Jewish women played in second-wave feminism didn’t seem to have much interest in the earlier activism of American Jewish women. So I thought it would be interesting to explore their participation in the great women’s social movements of the late 19th and early 20th centuries and to make the case that both the American Jewish community and first-wave feminism were transformed by Jewish women’s activism.

You start the book with a chapter on suffrage. What was American Jewish women’s role in this movement, and how did their fathers and sons take it?

Unlike the birth control and peace movements, the suffrage movement primarily saw Jewish women’s activism as individuals rather than as members of Jewish organizations. Jewish women attended suffrage meetings, held office in local, national, and international suffrage organizations, marched in parades, addressed both Jewish and non-Jewish audiences about the importance of enfranchisement, and wrote countless letters to the editors, articles, and editorials, among other activities. Some of them joined the more militant branch of the American suffrage movement and were even arrested for picketing and protesting. But there was an undercurrent of anti-Semitism in the suffrage movement, including among leaders like Elizabeth Cady Stanton and Alice Paul, that made some American Jewish women uneasy. That didn’t mean they necessarily opposed the cause, though some certainly did, but their activism and leadership never reached the heights they would in the birth control and peace movements a little later.

Jewish men held a variety of opinions about suffrage, but overall the Jewish community was supportive. Many Yiddish newspapers (like the Forward) wrote approvingly about suffrage and rabbis gave sermons in support of the cause. There was a strain of anti-suffragism in the Jewish community, just as there was in the larger American population. But during a series of statewide referenda on suffrage in New York, New Jersey, Pennsylvania, Massachusetts, for example, the districts with the most heavily Jewish populations tended to vote most overwhelmingly for suffrage—and since only men could vote, that does tell us something about Jewish men’s support for suffrage.

There has been birth control and contraception since time immemorial. But the movement in the US is generally dated to the World War I era, when Margaret Sanger began her activism and then opened the first birth control clinic in the US in 1916. She chose Brownsville, a heavily Jewish and Italian immigrant neighborhood full of married women who wanted to have children but wanted to know how to control the timing and spacing. At that time any contraceptive information or devices were legally labeled as “obscenity” and fell under the prohibition of the Comstock Laws of the 1870s. Most birth control activism remained illegal for several decades.

The impetus for the modern movement was the use of the diaphragm, which put the power into the hands of women instead of women having to rely on male condom use. In this way, birth control, something that plenty of men were interested in and worked together with their wives on, became a feminist issue because it empowered women to manage their own bodies and health.

Were Jews any more open-minded about birth control because our religion is generally less restrictive on this matter than Christianity?

It’s too simplistic to say that any religion has just one perspective on birth control and contraception. Even within the Catholic Church there was some confusion, at least during the early years of the birth control movement, about how to respond, and the various Protestant denominations developed different approaches. But there is certainly plenty of room within even the strictest interpretations of halacha for birth control (for married couples, especially those who already have children), and there are extensive Talmudic discussions about contraception. This heritage, in combination with the generally socially progressive outlook of many American Jews, led to American Jewish women’s heavy participation in the birth control movement as consumers, distributors (doctors), and activists.

There is a chapter on women in the peace movement. Why was pushing for peace a women’s issue and what drew Jewish women to it?

One hundred years ago peace was very much seen as a women’s issue. This was particularly true after World War I, when there was some anger about the mess men had made of the world. Women’s peace work was strongly connected with their roles as mothers; as such, they wanted to make the world a safe and peaceful place for their children to live. Jewish women were additionally drawn to the peace movement by their Jewish identity, as they felt part of a global Jewish community—and war was never good for the Jews. There were many, many Jewish textual sources advocating for peace and it was very easy for Jewish women to see peace as a fundamental cause. Major Jewish women’s groups like the National Council of Jewish Women and the National Federation of Temple Sisterhoods made peace one of their main priorities during the 1910s and 1920s.

Did they encounter any antisemitism in the peace movement, or was being Jewish an advantage? Or both?

Jewishness was an advantage in the sense that it led to all kinds of international connections for women interested in peace and in encouraging the development of international institutions. However, there was also anti-Semitism in the international peace and women’s movements, just as there is now, unfortunately. This became a major problem during the 1930s, when some peace activists just refused to acknowledge—or care—about the specific threats to Jews and Judaism posed by Hitler and Nazism. Many Jewish women struggled both with those threats and what to do about what they saw as the betrayal of their longstanding allies in the peace movement.

Any particular woman or women whose story or stories were especially interesting? Someone we just have to know about it?

There are so many! I wrote about some of them in a blog post you can find here.

But I guess I’ll say I have two particular favorites. One was Rose Heiman Halpern, who was one of the first clients at Margaret Sanger’s Brownsville birth control clinic in 1916. She and her family had very limited means, but she became a lifelong birth control activist and even testified in front of Congress during the 1930s. I am also especially drawn to Fanny Fligelman Brin, a powerhouse of a woman who was national president of the National Council of Jewish Women during the 1930s and an internationally renowned peace activist. From her Minneapolis home, she practically ran the world, and she was acknowledged during her time as one of the most prominent clubwomen in America, on a list that also included Eleanor Roosevelt. Restoring women like these, named and unnamed, not only to American Jewish history but to American women’s history was one of my primary goals for the book.

Lastly, to what degree were these women motivated to do this activist work because of Jewish ideas of tikkun olam and tzedakah? Or did did they not really see this work as a Jewish act?

Jewishness, whether defined religiously, ethically, culturally, or in some other way, pervaded Jewish women’s activism in the larger, secular women’s movement. It would be anachronistic to use the words “tikkun olam” for the 1890-1940 period, but the Jewish commitment to what we would now call “social justice” was clearly an animating factor.

Many of these activists chose to work through Jewish women’s organizations as the most appropriate and fitting way to engage in the women’s movement, e.g., the National Council of Jewish women sponsored (illegal) birth control clinics and the Women’s League of the Conservative Synagogue was a big player in the peace movement. And American Jewish women leaders of all religious, ethnic, national, geographic, class, etc. backgrounds took their Jewish commitments with them into their leadership roles outside the American Jewish community.