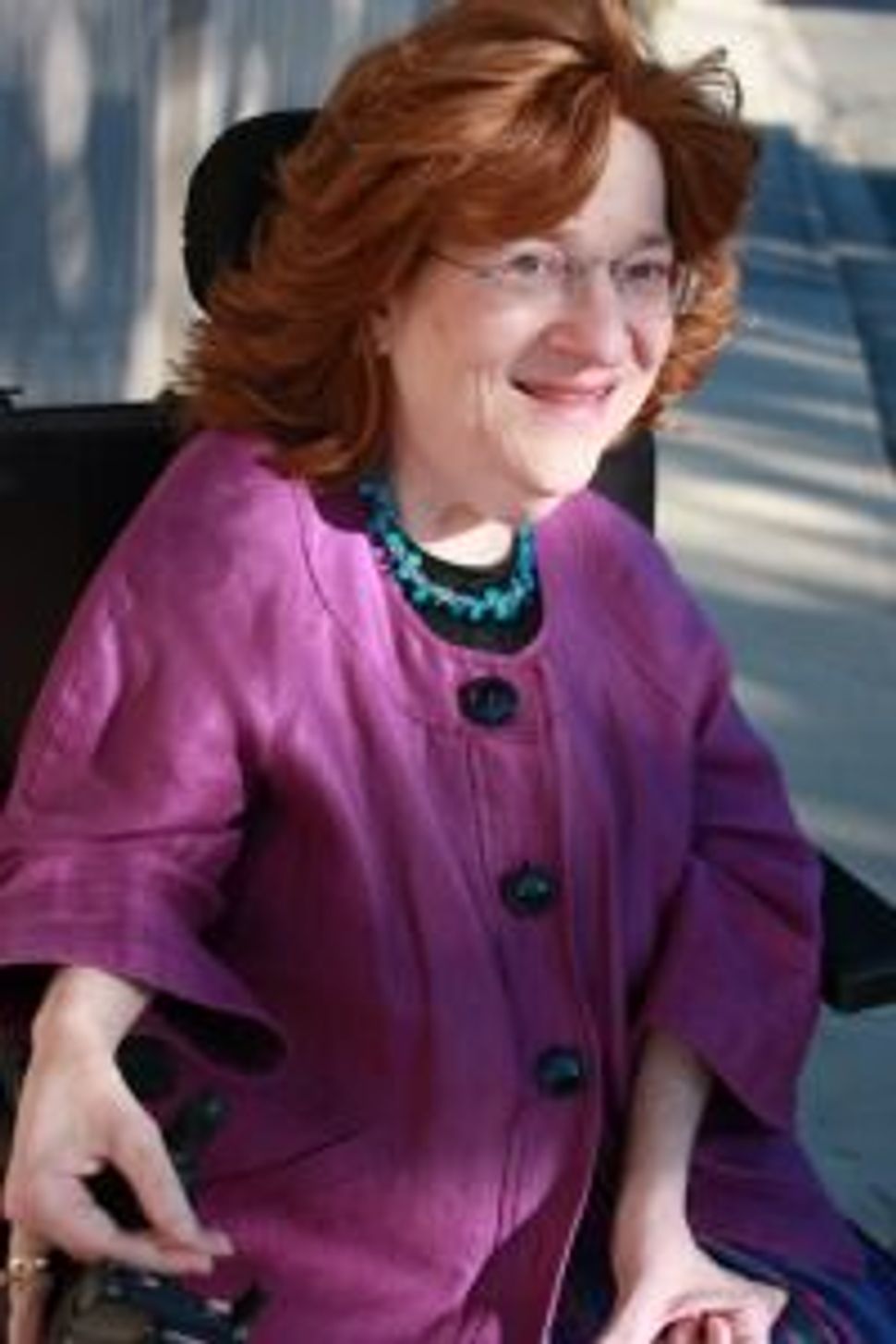 A few years ago, Chava Willig Levy went to a concert at Carnegie Hall. Having contracted polio at the age of 3, the 62-year-old lecturer and writer uses a motorized wheelchair. “Let the wheelchair pass,” a man a few steps in front of Levy and her friend said to his companion, as the former two left the concert. “You mean, ‘Let the lady in the wheelchair pass,’” Levy replied. “Well, you’re part of it,” the man replied — to which Levy retorted, “No, it’s part of me.”

Her memoir, “A Life Not With Standing,” which she published last December on CreateSpace, is filled with anecdotes such as this one. It offers a refreshingly honest and humorous look back at her eventful life. Levy grew up in an Orthodox family in New York City and now lives in Five Towns, in Long Island’s Nassau County, with her husband and children. She describes how she found her education — from segregated classes for disabled children to completing a Bachelor of Arts degree in French literature at Yeshiva University, and a Master of Arts in counseling psychology at Columbia University — as well as her career giving lectures and workshops on big matters of (Jewish) life, such as love and marriage, exasperation and miracles and disability.

Levy talked to the Forward’s Anna Goldenberg about her dating experiences, the role of God as a co-pilot in her life and why she loves it when children stare at her.

Anna Goldenberg: What made you write a memoir at this point in your life?
Chava Willig Levy: I want to communicate the notion that people with disabilities are neither patients to be cured nor children to be taken care of — or brave souls to be admired. I often tell people that if I were to sum up my philosophy of life in two words, it would be “independent dependence,” which is again one of the reasons I wrote the book: the idea that a person could be very, very dependent — I certainly am very dependent — but I’m very much in charge of the help I need…. The third reason is that there is a tragedy about disability. The tragedy is the stigma that society attached to the disability far [outweighs] the disability itself. Overarching all of that, I think I had a kind of interesting life, and certain parts of my life are kind of romantic. When people would ask, ‘How did you meet your husband?’ I would tell them how something that on the surface certainly looked like God was out to lunch, in fact was really the seeds of a miracle in the works. To me, that notion of being able to look back and see God’s hand in helping you to navigate your life, that’s something that matters a great deal to me, and was something I hoped the book would convey.

Did your Jewish faith and belief in God play a role during those many, many months you spent in hospitals as a child?
In writing about this, I was pretty stunned [by] all the things that happened in my childhood. I don’t think I had the slightest notion as a child that it is horrible to be away from home so much: At one of the places I was around the ages of 6 and 7, where visiting was pretty much once a week… I did not feel as if my life was sad or tragic or lonely. From what I was told, I was a very funky, happy-go-lucky kid. It must be some kind of cushioning… I never heard [from my parents] any kind of sighing, or [calling me] nebekh [unfortunate person]. What they must have gone through, I can hardly imagine.

In one powerful passage of the book, you write about the hypocrisy of Judaism with regard to female beauty. You state that while the Bible says that beauty doesn’t matter, in real life it actually does. Which observations and experiences made you come to that conclusion?
In all fairness, the Jewish world is certainly no worse than the world in general when it comes to this. I definitely found it painful, and I still find it painful that my world in particular will make a decision [based on that]. I would go to singles’ weekends, and guys would ask, “How come you’re here?” These were not mean or horrible people. They just couldn’t fathom that anybody would want to marry someone who looks deformed.

When you were in your 20s, did you experience people asking you why you weren’t yet married?
I would have done anything in the world to be asked that question! [Once] I was at a wedding, and a wonderful rabbi came over to me and said, “Mazel tov, Chavy, MBD.” And I was like: “MBD, what does that mean? Mordechai Ben David?” [A Hasidic singer referred to as MBD.] And the rabbi looked at me and said, “No, mirts’eshem bay dir? [Yiddish for “God willing for you.”] I was so thrilled to get such a wish from someone when very few people were giving me that message. I told this to a friend of mine who was about my age, probably about 30, and she said: “Oh, I hate when people say [that] to me…. It feels like they are rubbing it in.” For me, it was the greatest thing that somebody was wishing for me something that I wanted so much. I needed validation that I had a right to want that.

In the book, you write that when you visited Israel, people’s reactions to you being in a wheelchair differed from what you experienced in the United States. You mention the way parents talk to their children.
Here [in the United States], children were reprimanded if they were to stare or ask questions, or if they were to point. It’s a thrill for me when I’m in a bus or a subway and children are there and they clearly have a question. I try to circumvent parents’ tendency to shush the child. In Israel, somehow kids would not hesitate at all. They would just ask me straight out, ‘What happened to you?’

When children [ask that], I generally will not answer the question directly, instead I’ll say to children: “You mean, how come I’m in a wheelchair? It has to do with my muscles. Can you make a muscle?” Depending on their age, they do something with their arms. I’ll say: “That’s a strong muscle…. Do you want to see my strongest muscle? Ready? Count to three.” And I stick out my tongue and say, “My tongue is my strongest muscle. But you know, I have other muscles that are very weak.”

This article has been edited for style and length.