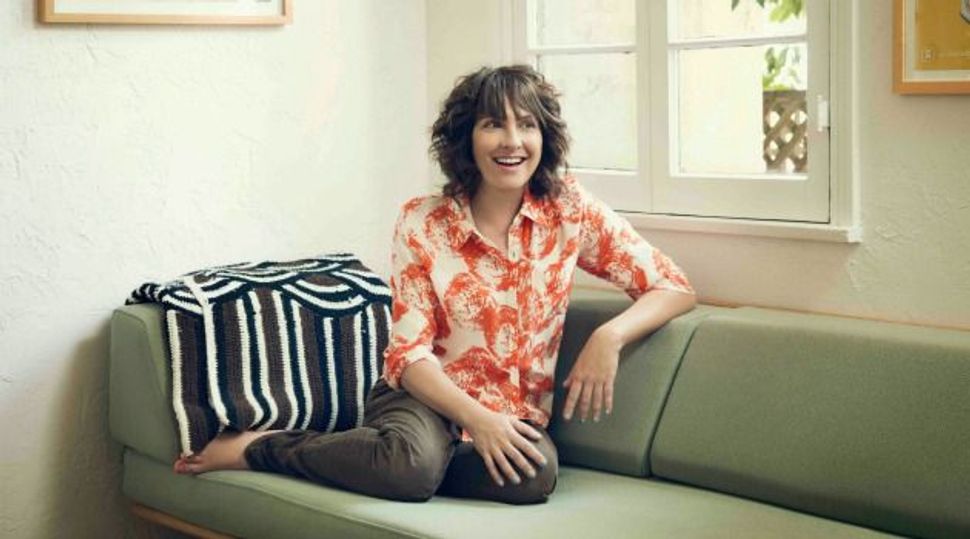 Jill Soloway, who has written and produced shows like “Six Feet Under,” “United States of Tara” and, her directorial debut, the movie “Afternoon Delight,” isn’t afraid to get a little Jewy and a little feminist in her latest work. She goes there, straight there, and for this, we love her.

She has a new pilot out on Amazon called “Transparent,” with a brilliant ensemble cast, including Jeffrey Tambor and Gabby Hoffman, playing a Los Angeles Jewish family with secrets to tell. (If you don’t want to know what those secrets are yet, read this interview after you watch the show.)

The Sisterhood’s Elissa Strauss spoke with Soloway about L.A. Jews, how becoming a Jewish mother made her a better artist and what you can (okay, should — again, this is a Jewish, feminist comedy!) do to help “Transparent” get turned into a full series.

Elissa Strauss: Where did the idea for the show come from?

Jill Soloway: Ever since I was working on “Six Feet Under” I was thinking about what a show of my own would look like about a family. I loved how “Six Feet Under” was centered around this metaphor of the family’s inheritance of death, and [“Transparent] is about sex and intimacy, about a family inheritance of a woman being born. They get this new mother from their father’s female self. It wasn’t until I made “Afternoon Delight” that I felt like I had a handle on it.

Why did you choose to make the characters Jewish? Do you think them being Jewish affects the way they will process what is going on, with their father’s transformation and their own?

I can’t help but write Jewishly. I came to this place after “Afternoon Delight.” My voice works much better writing about the world I know, and the specificity allows me to go deeper.

Also, Judaism is very concerned with boundaries and separation and difference. Anxiety around boundaries is a perfect Jewish topic, and this show is all about that.

Your work makes me realize how much better indie comedies would be if they all had some Jews in them. So often the characters in them are just so indifferent about life and the people around them — nothing ever matters. With Jews, things matter.

Yes! We need a word, some Yiddish version of Mumblecore. It has a Mumblecore aesthetic, but still feels like real-life.

I feel like L.A. Jews have not been explored much in pop culture. That we — I’m from L.A. — remain unknown in a way, especially compared to our New York counterparts. Am I missing something?

No, Nothing comes from my mind. I would love it if what Woody Allen did for the Upper West Side I could do for this side of the Ten [Freeway]. I got really into the specificity of the landscape and how L.A. is so huge. As opposed to Louis C.K. or Girls which is about this singular neurotic person trying to figure out how their neurosis will fit into the world around them, this is about trying to fit five different neurosis together.

I like how all five of these people have a hold on each other but don’t know why, even as they have scattered themselves as far apart as L.A. as they can get. They all try to have their own lives, but something, someone is holding them together. There is a magnetism to their unspoken secret, the secret was the boundary, and now that secret is gone.

Explain to me the process with Amazon Pilot? What comes next?

We will find early March whether we get to continue this. Basically, the people in studio dept. at Amazon go talk to [Jeff] Bezos, and let’s hope the data supports the purchase of nine more of these episodes and that would be our first season. This means pre-production and production this spring and summer and potentially new episodes late this summer.

Do you want to answer a “women in Hollywood” question? If so, would love to hear it. If not, I understand.

I’m happy to. Recently, I went and spoke at this event where they wanted me to talk about my career creating and directing and being a Jewish mom. At first I didn’t see confluence. But when I looked at what has happened to me these past few years, I saw how I came into my own as a director when I figured out that it was less about controlling everything and more about how to create a safe space for my actors. It is all about getting brilliant people together and letting them get wild. Knowing how to do that comes from a very motherly, feminine part of myself.

I used to think that when I was a director I would have a very specific vision of what everything would look like, but now I am more of a camp counselor. Women have more ability to allow what comes naturally to play out.

You work a lot of with Jewish cultural scene through the collective East Side Jews for “confused Jews,” which you helped start.Tell me a little bit about that and if there is any crossover between the Jewish work you do and your process as a director and writer.

Definitely. It goes back to that camp counselor thing, and this feeling that there are no stakes. At East Side Jews we can take a risk because it isn’t all about the rules. I started it to create a space for all those people who wouldn’t go to temple because they were scared of getting the rules wrong. We aren’t about aiming for some perfect version of the ritual, but getting people together and seeing what happens. I think I take that exact same map and lay directing on top of it.