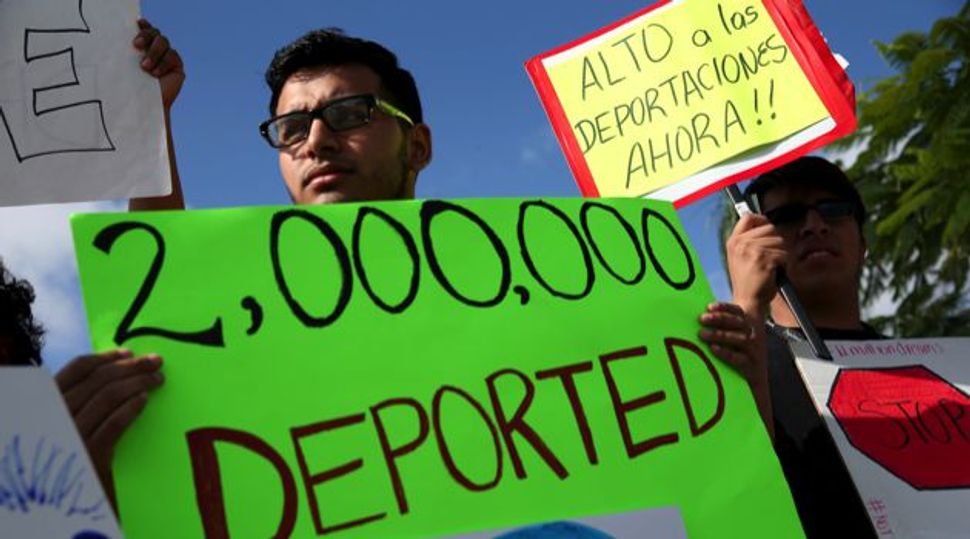 When my nana, Claire Laufer Daniels, was 17-years old, the Nazis marched into her hometown of Vienna and were welcomed with open arms. Seemingly overnight, her friends turned on her, she was forbidden from attending school and she was even forced to scrub the city’s sidewalks with guns pointed at her head. Thankfully, she was able to escape, but her parents stayed behind and were eventually murdered at Auschwitz. She came to the United States all alone as a scared 17-year-old. She spoke no English. She knew nobody. She had no idea what would happen to her parents. Thankfully, the National Council of Jewish Women (NCJW) was there to help. They took her in and taught her hairstyling, a skill she would later use to open her own salon. They taught her to speak English. They helped her become an American citizen. My nana passed away last summer at the age of 92. To honor her memory, and to honor the plight of today’s immigrants, yesterday I participated in NCJW’s Fast of Esther.

It was my first time participating in the Fast of Esther. Although I am well connected to the Jewish community — I am the Missouri State Policy Advocacy Vice Chair for NCJW and I am the Director of Advocacy and Communications at Central Reform Congregation, a St. Louis synagogue — I had never really given the Fast of Esther a second thought. Like many Jews of my generation, Purim meant carnival goldfish as a kid, partying in Israel when studying abroad in college, and taking our own kids to Megillah readings and carnivals now. This year, however, I acknowledged Purim by fasting to advocate for the immigrant women and families who suffer because of our broken immigration system that divides families and keeps many of our undocumented neighbors fearfully living in the shadows. This fast was part of the month-long, nationwide Women’s Fast for Families to stress the urgency of passing just and comprehensive immigration reform that is fair to women, children, and families.

Stories such as my nana’s are why members of the Jewish community have always been so passionate about immigration issues. As Mick Jones of the Clash and Big Audio Dynamite wrote in the song “Beyond the Pale,” (probably the most compelling pro-immigration song I am aware of), a song about his Jewish grandparents’ journey to a better life in the UK, “but for accidents of disorder, that guy could well be me.” Today’s undocumented immigrants could be all of us. I know not to presume that my fasting will make a giant impact on immigrant rights, but perhaps it will spur me to take a bigger stand for people whose voices are not yet heard.

I also fasted in solidarity with the 550 Northwest Detention Center detainees who have been on a hunger strike since March 8 in Washington State to protest deportations. Yes, I am fully aware that a day of fasting is not anywhere close to what they are doing, and that hunger is a serious problem in our society, but I think it is important that my family, friends and coworkers understand what is going on in this country in regards to immigration. So here it goes:

Since I am not much of a breakfast person, it was pretty easy at first. I did get a twinge of jealousy when making breakfast for our son, but I anticipated that the biggest issue I would have is the headache I was bound to get due to a lack of caffeine. I also anticipated this will be easier than the Yom Kippur fast, since I would be super busy at work.

I was surprised that I actually enjoyed fasting. It’s ironic, because I usually dread Yom Kippur, but yesterday felt different. Maybe it’s because there was a social justice issue behind the decision, and not merely because I was supposed to.

This fast also made me think about the detainees in Washington State. Hunger strikes are such profound methods of non-violent resistance. They can also be used to invoke guilt in others. I planned to employ the “guilt” method to get people in my social media circle to think about the immigration issue. When someone posted a picture of their lunch on Facebook (as people, for some reason, are wont to do), I commented on the fact that I was fasting and explained why. If someone mentioned that they just had a cup of coffee, I told them why I had a headache. I know, these are drops in the ocean, but perhaps it encouraged people to pay attention to this cause.

As the day moved on, I was so busy with work that I didn’t even noticed the fact that I had had nothing to eat or drink. What popped up in my head was how fearful the Persian Jewish community must have been at the time of Haman, and how fearful the 11 million undocumented workers that are forced to live in the shadows must feel now. They don’t enjoy the same workplace protection we do. They don’t enjoy the same legal protections that we do. Our current immigration system is broken. It is tearing families apart. As a community that has suffered so profoundly for millennia, it is incumbent upon us to speak up for those who cannot speak for themselves. I hope that yesterday’s fast will raise our voices together and finally get congress to do something.

I think my nana would have been proud of me. She was a lifelong progressive herself and always encouraged us to fight for what was right. I will continue to honor her memory by doing just that.