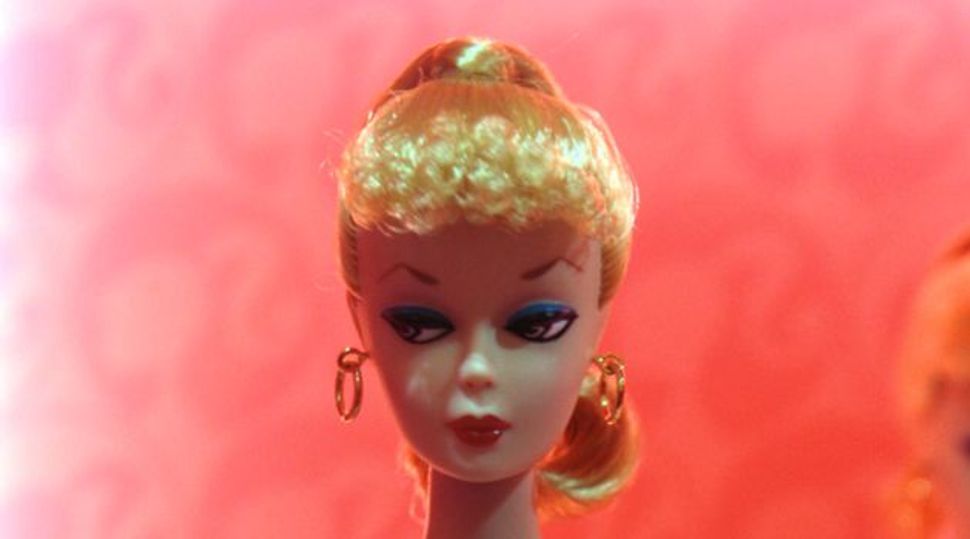 When Ruth Handler created Barbie in the mid ‘50s, she tapped into a fantasy of feminine perfection very particular to the mid 20th century. Those shiny blond locks, the wasp-waist, long legs and perky breasts proved irresistible to girls from all backgrounds, including Jewish ones like Barbara Handler, Ruth’s daughter and the doll’s namesake.

Now it looks like Handler’s plastic creation may be headed towards oblivion. The Daily Beast has a story by Brandy Zadrozny about how Barbie no longer captures the imaginations of young girls and why this is, obviously, a good thing. This doesn’t mean she has disappeared from the shelves of your local toy store yet, but sales have been declining for over a decade now and there are no signs of recovery.

Zadrozny chronicles the evolution and missteps (“Math class is tough!”) of Barbie over the last 55 years and points out that the phasing out of Barbie has as much to do with little girls growing bored as it does with everyone having enough with the unrealistic beauty standards she projects. A study from 2006 shows that introducing girls to Barbie at an early age can do long-lasting harm to their body image, and a more recent one shows that girls who play with Barbie are less professionally ambitious.

When Handler started Barbie it was because she wanted to give her daughter a doll who represented a woman instead of a girl. She thought it was important for girls’ self-esteem to be exposed to play with a doll with womanly features like breasts, and modeled her toy after a German doll that was meant as a gag gift for adults. This, combined with the fact that Handler later went on to found a company that created more realistic-looking breast prosthesis (following a mastectomy of her own), leads to me believe that the creation of Barbie was more of attempt of body acceptance and even sex-positivity for young girls that we give her credit for. She wanted girls to project their adult fantasies on dolls that had the secondary sex characteristics (albeit impossible, exaggerated ones) of actual adult women.

”If she was going to do role playing of what she would be like when she was 16 or 17, it was a little stupid to play with a doll that had a flat chest. So I gave it beautiful breasts,” Handler told the New York Times in 1977.

As the years went on the Barbie line came out with more racially diverse group. There are black Barbies, Latino Barbies and Asian ones too. Yet, none of these could dismantle the hegemony the blond one had on our ideals of beauty. Also, all of them were cut from the same ridiculous mold.

The fact that the lines of dolls that are displacing Barbie are more ethnically diverse suggests that we have finally arrived at a time where our notions of beauty better reflect what we actually look like. Maybe if Handler was creating a doll today, she would create someone a little more Semitic looking for her daughter to play with. Odds are that little Barbie would have preferred it that way.