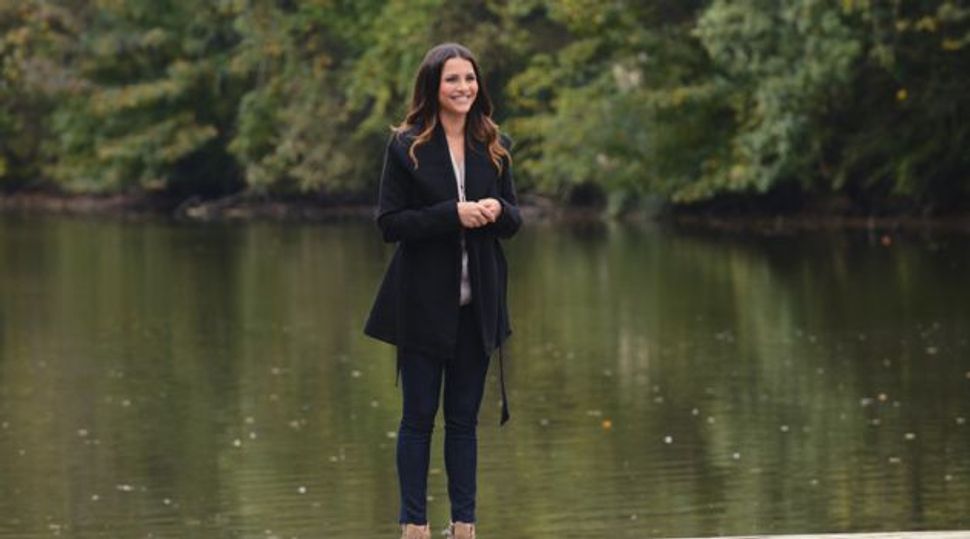 Andi Dorfman, the next star of ABC’s reality dating show “The Bachelorette,” is many things. She’s a prosecutor in Atlanta. She’s a fan favorite who took a guy to a date at a gun range. And she’s Jewish.

However, “fan favorite” is a relative term, and regular viewers of the show (they’re known as Bachelor Nation) have already gone online to weigh in on Dorfman’s coronation as the next Bachelorette. Some of the criticism makes sense — “She was mean to Juan Pablo, and I don’t want her to be mean to the guys who come on the show” — but some of it has a distinctly harsher tone.

“She’s kind of obnoxious,” wrote one critic, lobbing a complaint that comes up whenever a woman, Jewish or otherwise, says anything that differentiates her from a doormat. “I think the male contestants prefer blonde Bachelorettes,” wrote another. Another dubbed her “a brat.”. Several compared Dorfman to Grumpy Cat, complaining that her mouth points downward too much.

In other words, some people on the Internet would really like Dorfman to be less Jewish if she expects anyone to fall in love with her on national television.

Yet it’s these stereotypically “Jewish” traits of bossiness and determination that made Dorfman popular with The Bachelor audience to begin with. When she reached the final three, she stormed off the show and told off the star, Juan Pablo Galavis. Dorfman said that during their alone time in the show’s “Fantasy Suite,” Galavis admitted that she was his fourth-place he pick but kept her over a single mother because it would be inappropriate to have sex with a woman who had a child.

On a show where women often talk about how they’ll die if they don’t make it through to the next round (in Bachelor parlance, “accept this rose”), Dorfman decided a rose wasn’t worth the trouble and bailed of her own volition. On an anti-feminist show, it was an explicitly feminist act.

Until then, Dorfman had been a somewhat forgettable contestant — but her kiss-off of a Bachelor who seems to be unpopular with both viewers and producers made her a breakout star. However, it sounds like a lot of people prefer Dorfman’s tough prosecutor persona in smaller doses.

Though Dorfman is the first Jewish Bachelorette, she isn’t the first Jewish contestant in the show’s history. Bachelor Jason Mesnick, best known for proposing to one woman in the series finale and then later dumping her on live TV to be with the runner-up instead, is of Jewish heritage but doesn’t identify religiously. His now-wife, Molly Malaney, is Catholic.

And a previous Bachelorette, Ashley Hebert, fell in love and later married her pick from the show, JP Rosenbaum. During their televised courtship, Ashley met JP’s family, who showed her embarrassing pictures from their son’s bar mitzvah. When they married — in a lavish ceremony paid for by ABC and aired live — they had an interfaith ceremony.

Here are some words that were not used to describe Mesnick or Rosenbaum: Bossy. Obnoxious. Bitchy. Grumpy Cat. Mesnick was roundly — and deservedly — criticized for dumping his fiancée on live TV, but he was judged for his actions, not for the way his smile may or may not have looked or what color his hair was.

In her tirade against Galavis, Dorfman complained that he hadn’t tried to get to know her as a person, that he hadn’t asked any questions about her political or religious beliefs. This could simply mean that Dorfman found Galavis shallow, but it hints at what kind of woman Dorfman is – and what kind of a Bachelorette she could be.

Although the show’s stars usually have very little input into who gets cast as their potential love interests, it would be interesting to watch Dorfman choose men who are also passionate about their beliefs. And that may also mean that she’s interested in finding a Jewish spouse, or at least one who is willing to have frank and honest conversation about religion and compatibility. In other words? Dorfman seems to want a real man. I just hope that she can find him in a sea of stunt-casted male models.