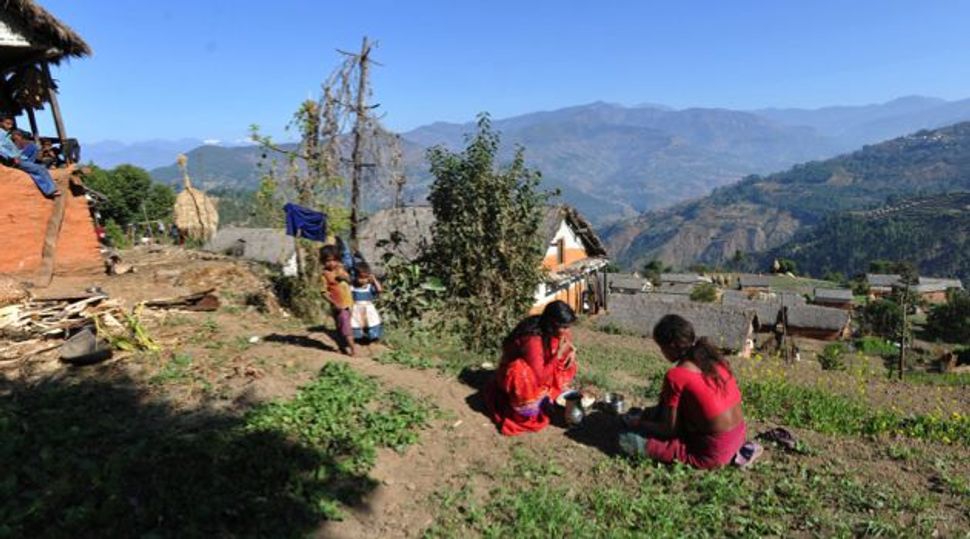 There is a heartbreaking story by journalist Rose George in Mosaic Science (h/t to Jezebel, who republished it) about menstrual taboos in Nepal and Bangladesh. Among families who observe chhaupadi, a tradition among some Hindus in the region which prohibits any contact with a menstruating woman, daughters and wives are sent to sleep in sheds for 5-7 days and eat only dry foods, salt and rice. These women are forbidden from entering their own houses, touching men or boys, eating anything made from milk out of fear that the animal whose milk it was made out of will die, and entering temples or even worshiping gods on their own. They also are not allowed to hang the rags they fashion into loincloths as sanitary napkins in the sun to dry, which turns the rags into a breeding ground for bacteria and a serious health hazard which can lead to infertility and worse.

Recent surveys indicate that 19% of women in Nepal in the mid- and far-western regions observe chhaupadi, and about half in the more mountainous regions. This is despite the fact that in 2005, Nepal’s Supreme Court declared it illegal, and a few years later a government ministry issued guidelines to help eradicate it for good.

George’s piece is so touching because she spoke directly with young women who follow thee taboos, and listened to what they had to say about it. In a group setting, many told her that this practice is necessary, and if they didn’t follow the rules, bad things would happen. But once she got the one woman alone, the resistance came out.

“Of course I hate it,” a 42 year-old woman named Nandakala said. “In the winter it’s cold. In the summer it’s hot. The restrictions are stifling and unfair. “Why should the gods punish us? Why should women be punished? But what the hell can we do?”

Interestingly, the prevalence of menstrual taboos makes talking about periods easier in Nepal than elsewhere. George points to a study in Karachi, Pakistan that found that half of all girls aged 14 to 17 knew nothing about menstruation. The girls George met spoke openly and freely about their periods, more openly than the author’s girlfriends used to when she was a teenager in the UK.

Of course Hinduism isn’t the only religion with a set of prohibitions surrounding menstruation, though it is the most severe. The second in line in terms of severity is Judaism, which has somewhat similar rules surrounding women made “impure” by their periods.

When traditionally observed, the Jewish custom, known as niddah, forbids women to have contact with men during the seven days following the onset of their periods. She is not considered clean until she goes to mikvah, or ritual bath.

Some interpret the prohibition of contact as just sex, while others refuse to touch at all, avoid passing each other objects, sleep in separate beds, and the husband can’t eat his wife’s leftovers.

There is something to be said for how ritualizing menstruation actively acknowledges it in a way that our blood and vagina-phobic mainstream culture fails to, and I understand the appeal of the mikvah as a chance to pause and renew on a monthly basis. I also believe those who insist that the forced separation between spouses during the niddah injects some excitement into their romantic life.

But just because there are elements of a custom that are good for women, doesn’t make it a custom that is good for women. When a basic biological function of women turns them into an other in their homes and communities, there is always room for abuse. This is made all too apparent with the chhaupadi.

I’m hardly a halachic scholar, but I know that Jews let go of many of their purity laws after the destruction of the Second Temple, and that due to ancient laws I don’t totally understand we are all technically impure now anyway because we can longer properly purify ourselves from contact with corpses. (We would need to do some elaborate ritual involving the ashes of a red heifer, and apparently nobody has done this since 70 AD.) Maybe it is time to add niddah to this list of impurities that we just live with. Women could still observe separation and the mikvah, but the difference is it would truly be their choice.