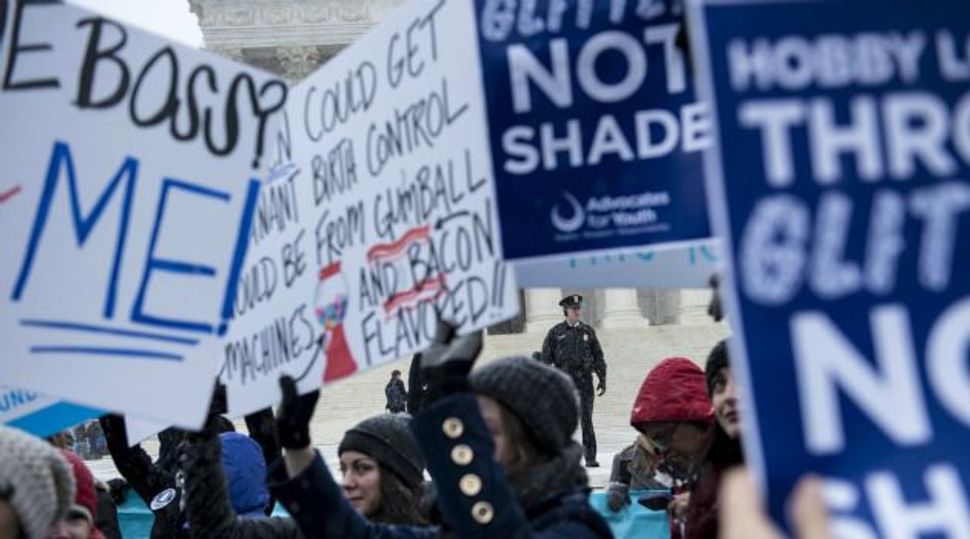 Today the Supreme Court will hear the Hobby Lobby and Conestoga Wood cases arguing that religiously-inclined private employers should be able to exempt themselves from the ACA’s contraception mandate. When I initially wrote that Jews, as a religious minority in the country, should be alarmed by this case, I received some vigorous pushback. But I’m doubling down. In recent weeks many experts have weighed in on the case, and the obvious conclusion can’t be denied. This troubling case weighs individual religious freedom vs. corporate religious freedom, and if religious minorities want to preserve their right to live freely regardless of their boss’s beliefs, they’ll pay close attention.

In a must-read post, Maya Dusenbery of Feministing took some of the choicest quotes from amicus briefs in the case, which espouse such religious views as” “the promotion of contraceptive services…harms society in general by ‘open[ing] wide the way for marital infidelity and a general lowering of moral standards.’” These kinds of out-of-date beliefs shouldn’t be imposed on employees trying to live their own ethical lives, not just because it would be greatly wrong, but because the obvious extrapolation is worrisome.

Conservative Christians don’t believe in premarital sex. But Christian Scientists don’t believe in medical science. And some business owners surely believe that HIV is a punishment for sin. Jehovah’s Witnesses don’t believe in blood transfusions. And Scientologists don’t believe in talk therapy or antidepressants. Maybe IVF or fertility treatments offend some. As the Guttmacher Institute’s comprehensive report on the case notes, in a world post-Hobby Lobby victory, “employers might claim religious objections to coverage — for everyone or, for instance, for those who are young, unmarried or gay — of HPV vaccination, STI testing, breast-feeding equipment, maternity care, blood transfusions, HIV medication and mental health care.”

And the slippery slope goes deeper, too, beyond coverage for pills right through that closed door of individual meetings with doctors. At Think Progress Tara Culp-Ressler makes a crucial argument that if Hobby Lobby and co. win today, “they’ll win the right to refuse to extend coverage for doctor’s visits that include discussion about certain forms of contraception, like IUDs or the morning after pill.” In other words, not only will coverage of the pill itself be barred, but a confusing and humiliating dance will be required if women, men, or transgender individuals working for any of these exempted companies wish to discuss medical family planning with their doctors. This scenario seems simply absurd, but is possible.

Today, many of my friends and colleagues will be in DC on the Supreme Court steps declaring that contraception is “not my boss’s business.” Whatever you think about the morality of contraception, it would be a good idea to join their defense of religious liberty.