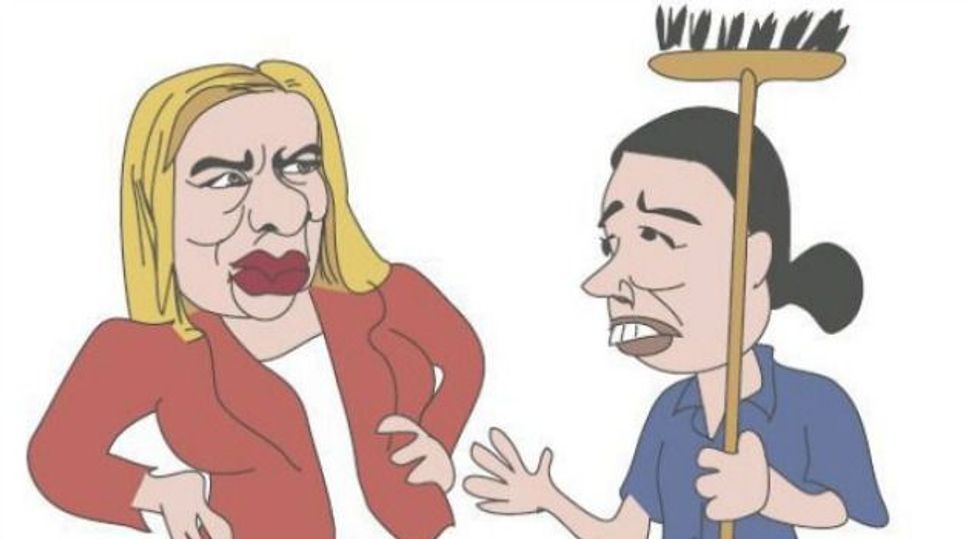 First there was your nanny way way back in 1996 – a young South African girl named Tanya Shaw, who told the press that you were a nutty clean freak, a screaming shrew and accused you of firing her on the spot for committing the sin of burning soup and of having burly security guards drag her out of the Prime Minister’s residence after examining her suitcase to make sure she hadn’t stolen anything.

You called her crazy – or at least your husband, the Prime Minister did. His office issued a statement saying the young woman “showed indications of acute instability” which was why she was “removed.” and that “the Netanyahu family regrets the au pair’s severe condition and her imagined and false claims, and will do everything possible to help in her rehabilitation.”

Then, in 2010, there was your maid Liliane Peretz, who went a step further than complaining and filed suit against you in labor court. She said that during the six years she worked for you, you shouted at her, humiliated her, overworked and underpaid her – and insisted that she change clothes during the working day to remain hygienic enough for you. Your letter to the court said her claims were “fabricated” and that Peretz received nothing but “warmth and love” from you. The battle between you was ugly – and finally resolved in 2012 with an out-of-court settlement. No one knows how much money Peretz was given to stop her attacks but one can presume she no longer feels underpaid.

In both cases, your husband’s public relations team managed to launch impressive smear campaigns against the two women – you didn’t come out of the incidents looking very good, but neither did they.

But the news that broke Wednesday – the details that leaked of the lawsuit by Meni Naphtali, who managed the Prime Minister’s residence for 20 months and who’s suing you and Prime Minister Netanyahu for a million shekels in compensation – looks like a whole new ball game.

Three strikes and you’re out?

Naphtali’s descriptive lawsuit is far more damaging and his credibility is going to be much more difficult to impugn.

This is a man with an impressive military background, who served in military units, after countless security screenings and who worked as your personal bodyguard. He was then hand-picked to be residence manager – what is quaintly known in Hebrew as “house father.”

And oh, the things he’s saying in his labor court claim for more than a quarter of a million dollars. The basis of his suit is that he was promised but never given a fair work contract with full benefits. He also claims:

The Prime Minister’s Office has called it “evil gossip.” The press, naturally, is gobbling it down faster than the most delectable Shabbat dinner, and the memes are coming fast on Facebook. One can only imagine what’s coming up on the comedy satire shows – they’ve already made plenty of hay from the infamous ice cream scandal and recurring “Flying Bed” episodes.

It’s a shame, Sara. Just recently, you’ve been looking good, with a new wardrobe and a slimmed down figure that everyone has noticed. Now we’re thinking maybe the makeover was strategically timed – you knew this was coming and figured you might as well get ready for your close-up.

Unfortunately, with these kind of accusations flying at you, there is little hope for finding a flattering angle.