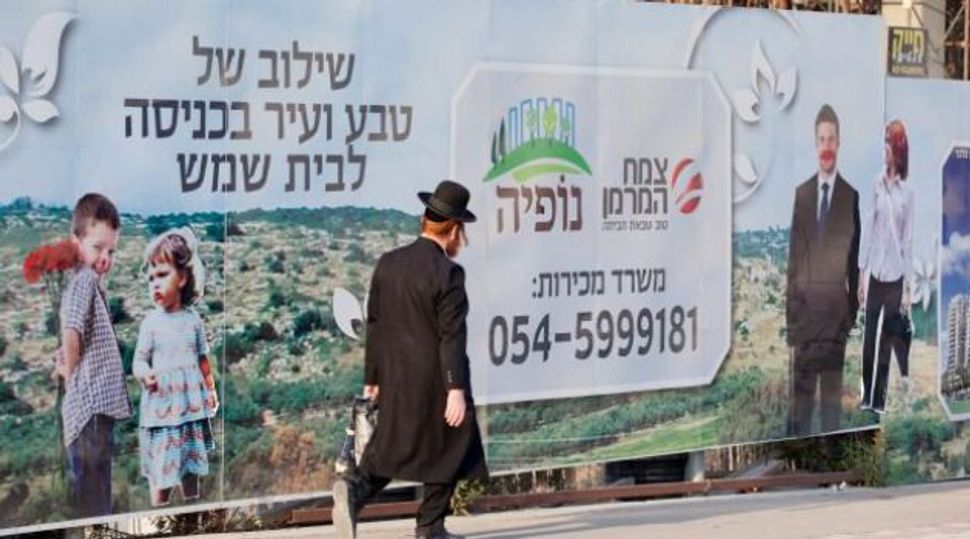 (Haaretz) — It was as frightening as any terrorist attack, recounted the young woman assaulted in broad daylight at a bus stop in Beit Shemesh last week.

But in fact, it was probably worse.

After all, one might presume that if an Israeli Jewish woman had been attacked by a Palestinian in the middle of the street, the bystanders around her would have rushed to her assistance, or at the very least, hastened to call the police. But that’s not what happened when this 25-year-old woman sitting at a bus stop with a toddler on her lap was verbally and physically assaulted by an ultra-Orthodox man last week who cursed at her and screamed that she wasn’t dressed modestly enough.

No one, she said, came to her aid or called for help, when he pulled her by her hair and threw her on the ground.

The attack was reported in the print media, but the young woman who was attacked at a bus stop in the haredi neighborhood of Ramat Beit Shemesh Bet went on television this week and related the full harrowing story herself. Her face was blurred on camera, but her story was clear and detailed, and painted a troubling picture of life in Beit Shemesh only a few weeks after its ultra-Orthodox mayor was reelected. The event turned the national spotlight on Beit Shemesh once more, has reinvigorated the struggle of a group of Beit Shemesh women to fight against intimidation in their city through the legal system, and revived discussion of whether coexistence is possible in Beit Shemesh or whether the non-haredi population would be wise to either pack their bags or divide their city in two, that is attempt to formally secede from the ultra-Orthodox neighborhoods.

The woman was sitting at a bus stop with her two-and-a-half-year-old daughter, dressed in a skirt with her head covered, when she was accosted by a haredi man. “He put his face right in front of mine and shouted “Slut! You weaken men!” she said in her Channel 2 news interview. “I was completely frightened by him, and I screamed.”

She called the police for assistance on her cellphone, as he turned away and crossed the street. But when he saw she was calling for help, it infuriated him anew. “As I was talking to the police, he saw what I was doing and he turned around and crossed the street back to me, running towards me at a crazy pace right in the middle of the traffic – he didn’t care about the cars on the street. He pulled my hair, knocked me to the ground, pulled off my head covering, and kept shouting “Get out of here!” with horrific screams. My daughter saw the whole thing and was crying as I yelling “Leave me alone, help me, call the police!”

The television interviewer then asked her if anyone came to her assistance as the man attacked her and berated her. “There was one man who saw it and people across the street and there was a store near there. Nobody came to help me. No one. I yelled for five minutes ‘Help me! Help me! I beg of you! Call the police. help me!’ Nobody came.”

The man attempted to grab her phone out of her hands, and she said that she tried to resist him “till I started to feel in danger for my life, like I was being attacked by a terrorist who would do something terrible to me. So I let go.”

She said that both she and her daughter were treated at the hospital after the incident – she has bruises on her body and both she and her daughter are suffering from posttraumatic stress disorder. The worst part, though, was that she was ignored by bystanders and left to fend for herself in the face of a violent attack. “I don’t dare to go near that part of town anymore, I’m horribly afraid to go there. We’re not talking about one person, it’s a group and they support each other.” She stressed that she wasn’t anti-haredi, and that the majority of ultra-Orthodox men simply avert their eyes when they don’t want to look at women. “They don’t yell and hit women, that’s not the way of the Torah.” The extremists, she said “are a small group of people, they are the ones who have to be brought to justice.” Justice is still pending for her attacker – who was held under house arrest for five days outside Beit Shemesh pending charges.

The incident has renewed the determination of a group of women who are suing the city of Beit Shemesh for damages after they suffered violent attacks presumably because they were dressed immodestly – all of them are modern Orthodox women who were threatened by haredim.

The news of the attack “didn’t surprise me at all,” said Nili Philipp, one of the plaintiffs in the case which asserts that the signs around Beit Shemesh ordering women to dress modestly and not to congregate in certain places have created an atmosphere which give men permission to ‘enforce’ the supposed regulations – by intimidation and force. The city refused to remove the signs even when the women filed police complaints over them, although they are technically illegal, so the women hit city authorities in the pocketbook by suing them for damages in the cases of their own assaults. Philipp was hit in the head by a rock while cycling in the city.

There were three court-recommended mediation sessions held over the summer, Philipp says, which failed. The city she said “couldn’t offer us anything that would compensate for the insult and the humiliation we suffered.”

The legal proceedings were put on hold for the duration of the election campaign. The day after they were disappointed by the re-election of the mayor they hold responsible for the atmosphere in the city, they headed to court, where a judge set a June 16 date for their case to be heard.

The magistrate’s court judge, Phillip said, only agreed to hear arguments for monetary compensation for their suffering. The order they are seeking to force the city to take down the signs, they were told, would have to be filed in administrative court.

“We know that even if we had won the election we had a tough battle ahead. It would have been easier, but it wouldn’t have been easy. Since the election, we know it is tougher, but that doesn’t mean we stop fighting for a fair and equitable society .. we have to rely on the legal system to defend our rights.”

Since the election, the secular and national religious sectors in Beit Shemesh have been buzzing with two topics – there is discussion of whether there is a future for non-haredim in the city and who is planning to leave – and a last-ditch attempt at preserving their quality of life by dividing the city into two – formally separating the haredi and non-haredi sections of the city into two separate towns. Such a solution would reduce contact between the populations and quell the resentment of the non-haredim that their tax shekels are going to support a population that is actively working to drive them from their city

Whether or not the city is divided, and whether or not she stays in it, Philipp says she would never abandon her crusade to get rid of the modesty signs. “This has nothing to do with coexistence. It is a city in Israel breaking the law. Even if I did plan on moving, these signs are a violation of my rights and every other woman’s rights, and they have to go.”

And just when women’s rights advocates in Beit Shemesh thought that things couldn’t get any more depressing – the municipality made a big announcement designed to please and placate the secular population.

They proudly announced that they will be bringing a top headlining singer to the city for its Independence Day in May. The guest of honor: Eyal Golan, he of the scandal involving sex with teenage girls. This makes Beit Shemesh the only city in Israel to ignore the performer’s tarnished image and invite him to sing. That the haredi town fathers, supposedly so committed to modesty that they don’t include photographs of women in municipal publications, has seen fit to proudly sponsor a Golan concert, has felt like the icing on the cake of their tone-deafness to female concerns.

As Eve Finkelstein, one of Phillip’s fellow plaintiffs sighed: “Beit Shemesh is fast turning into Israel’s center of women’s disempowerment.”