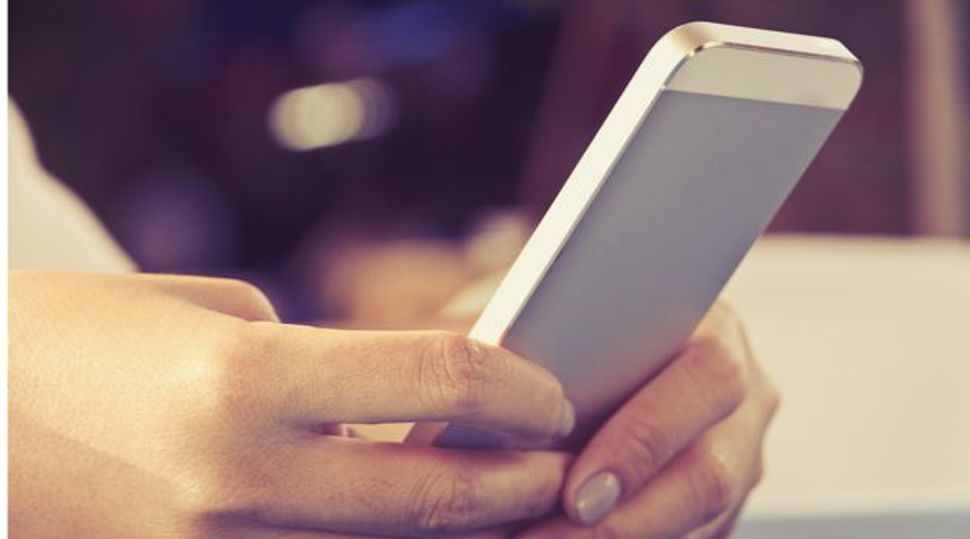 Texting is now the most popular way to break up with one’s partner, at least according to XOJane. Why? “It’s less awkward,” survey respondents said.

My fellow millennials, let’s get one thing straight. Whipping off a short digital note with one hand and half a brain to someone with whom you’ve been recently and repeatedly intimate on an emotional, intellectual and probably physical level is not “less awkward” than sitting down in person. Sending someone who cares, or once cared, about you a few kilobytes to tell them you no longer care is degrading. It’s disrespectful. It’s dehumanizing. It’s just plain wrong.

Now, here’s the thing about us Jews: we thrive in text. Our religion was born of texts. We are molded by those texts from a young age. We quickly become masters of analysis. We read and re-read and perseverate. Our Jewish texts surround us, penetrate us and have bound us together over millennia and miles.

Our texts are how we see our God. They are meant to give us a sense of who we are and a guide for how to interpret our world. Text to us, as with many other tribes and religions, is something sacred and enduring; meant to make impact us emotionally, to make us think on a higher level and more deeply consider our humanity, no matter how seemingly meaningless the week’s Torah portion might be. No matter who you believe wrote the Torah — God or politicians — it’s easy to imagine that the crafter of our texts poured time, sweat, and great care into them, and in to deciding what would be later codified and what would be not.

Our sacred texts are, in effect, the exact opposite of these breakup texts we send today, which have a simultaneous profound emotional impact on the receiving end and more or little thought or regard on the sending end. That’s why we Jewish millennials should be extra suspicious of them.

As you may have surmised, dear reader, recently a boy decided he was no long interested in being romantically involved with me. He decided to inform me of said decision, without warning, via text message. The condescension was palpable, and the worst part was when I attempted to defend myself against his allegations, he didn’t respond. After all, when you’re looking at a screen, it’s hard to remember there’s a human on the other side, and easy to forget how his or her face might crumple in agony when he or she receives your message. It’s like you got off scot free! Why bother responding?

Herein lies the biggest problem with the text-breakup: attuned to our phones and computers, it is so easy to forget there’s a person — a living human being with emotions, intellect, and a complex inner life — on the other end of that text that whose subtext is, “I never want to see you again, and no, I’m not going to explain myself.”

This offhand, faceless manner is not how we were meant to communicate. Oh don’t worry, I’m sure our modern brains will soon better adapt to it. But it saddens me to think that upcoming generations will probably rely mostly-to-solely on faceless communication, and thus lose that depth of emotional cues that the people in front of us, or the authors on the other side of a long missive, bring to life.

Emotional depth is part of what makes us human. Texting has a way of sanitizing that humanity. Why do you think cyberbullying has taken off? It’s easier to pick on a person when you don’t have to experience their reaction to your mean comments. And easier to break a heart when you don’t have to see it crack. How wonderful that we can have this profound negative impact on our fellow humans without having to experience the potentially negative repercussions ourselves.

I’m not at all calling for us to stop texting flat. Texting absolutely has its usefulness and positive attributes: it’s fun, it’s efficient, it helps maintain of friendships that might otherwise expire, and assures our worried parents that we are, in fact, alive and well even though we haven’t written in a week. I love being able to communicate with friends all over the world without regard for timezones, knowing that they’ll get back to me when they can. I like being able to let colleagues know I haven’t abandoned them, I’m just running a bit late.

But the practice of the break up text needs to stop. I know it won’t, but it needs to. This goes beyond what our mothers taught us about keeping in touch with those we love. This is about extending the basic courtesy of acknowledging a person’s humanity by looking them in the eye. This is about acknowledging that you are going to hurt another person, taking responsibility for that hurt, and learning from that experience. Texting can deprive us of that precious learning experience of how we affect the people we love. Let’s please not let it.