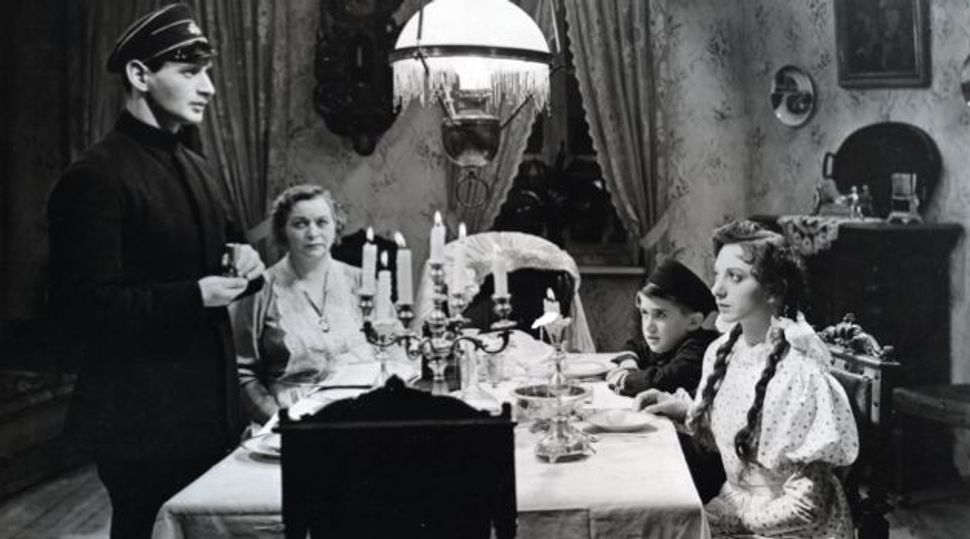 Lucy Gherman had a long and winding career in Yiddish theater but it was likely her role as the long-suffering mother in the Yiddish film “A Brivele Der Mamen” (“A Letter to Mother”) that made her known for the ages. (She is pictured in the photo above, second from left, in a still from the film.) Themed around a family’s dislocation in the years leading up to WWI, the film was produced by Joseph Green. It was released in America the month Hitler invaded Warsaw in 1939. The film’s title song, long familiar to Yiddish theater goers, and was later reinterpreted by Israeli musician Chava Alberstein during Israel’s 1973 war. The song depicts a mother left behind in Eastern Europe reminding her son who has left for America to remember to write her a little note — no matter how many he’s already written her. It will ease her loneliness and pain. The film has also been released as “The Eternal Song.” It featured a script by Forverts writer Moyshe Osherowitch and scenes filmed depicting the exterior of the newspaper’s original building at 175 East Broadway.

In the title role, Gherman plays a downtrodden but fiercely determined mother whose family has been scattered and damaged during WWI. With the mishpokhe in tatters, she remains alone in Warsaw, with one thing on her mind — to find her long lost talented youngest son she sent to America, whose promised letter to mother never arrives. Lucky for the mameh in this tale, the Hebrew Immigrant Aid Society representative (played by Gherman’s off-screen husband, Mischa) sent to Poland to help post-war refugees falls head over heels for her and brings her to the US, where as fate and Yiddish cinema would have it — her son is headlining a benefit concert for HIAS. When she tries to reveal herself to him she is overrun by his fans — and shortly thereafter — by his limousine. Fortunately, she is revived in the hospital in time for them to reconcile — before passing out again — at which point the end credits role.

The film features such classic scenes as the family’s first Passover seder without their father who has left them to seek his fortune in the States. That scene highlights Gherman’s noted ability to strike just the right balance of dignity baked in sorrow as depicted when she directs her youngest son to recite the four questions to his father’s empty seat.