‘Halachically Yours’ Provides Sex Ed for the Orthodox 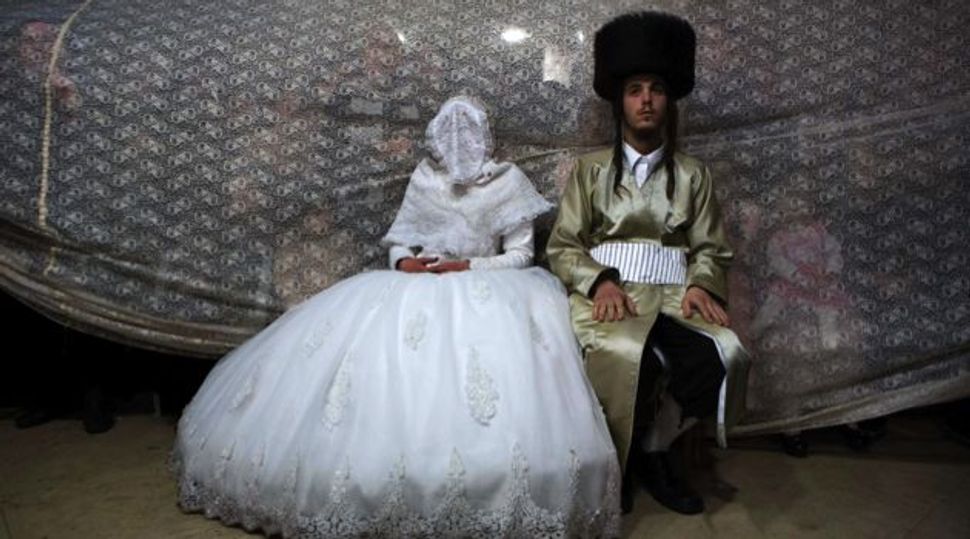 *Getty Images // An Orthodox bride and groom in Jerusalem**

HalachicallyYours.org is a web site opening the lines of communication about sexuality and intimacy in married relationships in the Orthodox community. I spoke with Sarah Epstein, who has been a sex educator for four years, about her project and why sex ed is still taboo among religious Jews.

Megan Sass: What are the topics you are making sure to touch on?

Sarah Epstein: We create a framework in which people can discuss the notion of what’s halachic and what’s not, but we are very careful to encourage people to talk to their own halachic authority. We talk about foreplay, we talk about communicating with your partner, what you like, what you don’t like, learning about your partner’s body, and understanding that intimacy is an emotional thing as much as it is a physical thing.

What is the biggest challenge in this arena of sexual therapy?

Why do you think that it is still a taboo in this community?

It is generally only talked about within [very specific] boundaries. You don’t talk about sex until you are married and it’s relevant to you. The problem is there’s a huge gap in knowledge. You wouldn’t send someone for a math test without teaching them math; you try not to send kids in school without some sort of social skills. You’re kind of throwing halacha observant adults into a really intense situation without guiding them in any way. If you’ve never been naked in front of someone, it’s a very vulnerable experience. The assumption is you’re an adult and therefore you know these things, but no one has ever taught you.

Do men and women react differently to your programming?

Yes, but I feel like part of that difference in reaction has to do with sort of a weirdness around a man acknowledging to a woman that a sex curriculum is good. It’s a little weirder to be asking about it, maybe, if you’re an orthodox rabbi. I think we’ve gotten more support and more openness from women that we’ve spoken to. It might be because we’re women, or it might be because women talk about this stuff with other women. I foresee the challenge of reaching men more than I fear the challenge of reaching out to women.

The featured cause is Bat Melech, which is the only domestic violence shelter in Israel geared toward religious women and their children. It’s the other side of the coin; we are trying to positively impact relationships, and support a cause that helps women get out of bad relationships. They deal with legal issues, legal barriers in Israel with the rabbinate, in terms of getting women out of marriages when the rabbinate wants you to maintain shalom bayit (peace in the house); rabbis who are telling women that “Divorce doesn’t look good to the community.”

They have trouble getting funding from other sources. The government says, “Oh, we give enough money to ultra-Orthodox communities.” Like, “This is your problem in your community, and you need to deal with it.” They have a group of American women who are giving them x-amount of dollars to open this shelter with the stipulation that they couldn’t publicize their cause, because you don’t want to air your dirty laundry. So [Bet Melech] decided they couldn’t do that any more.

‘Halachically Yours’ Provides Sex Ed for the Orthodox