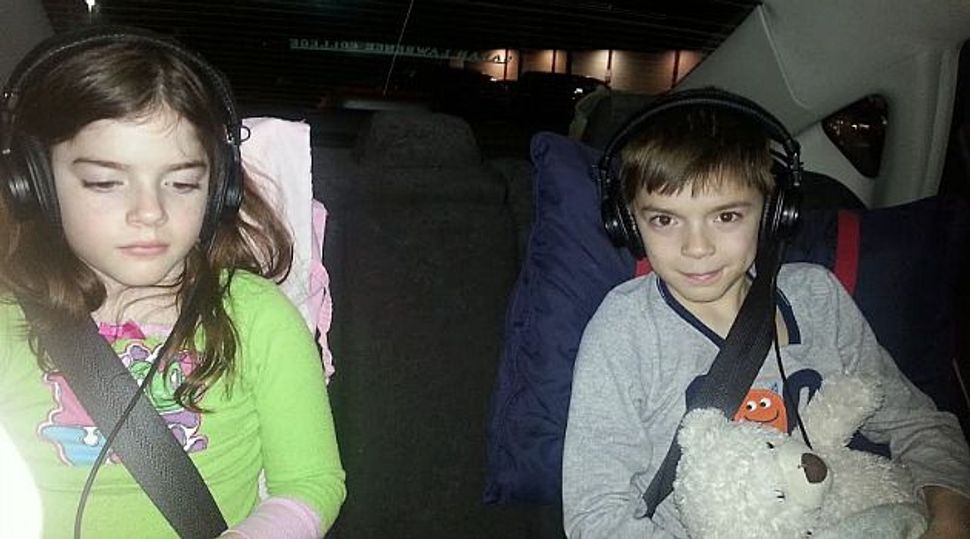 Image by courtesy of goldberger family

Frimet Goldberger’s children enjoy their recent family road trip. She admits being happy to get out of the driver’s seat for good.

Road-tripping is one of those overly romanticized activities we read about and want to — no, positively have to — add to our bucket lists. Get in a car — instant Kerouac. Or so we romanticize.

Mark Twain wrote in “Tom Sawyer Abroad”: “I have found out that there ain’t no surer way to find out whether you like people or hate them than to travel with them.” To which I add, “For 18 hours, cooped up in a mid-size car with children asking, ‘Are we there yet?’ while the driver mindlessly eats chocolate and chips and bangs her head on the steering wheel to keep awake.”

That’s exactly what I did, twice, in the last three weeks when my husband and I drove down the east coast and back to Orlando for Passover. We decided to travel by car, not because we enjoy the road and the 650 gas stations (in truth I stopped counting after five) along the way, but because it’s economical. And scenic. We hoped. So on the Thursday before Passover, we stuffed our trunk with sunscreen, matzo and ice boxes of kosher meats and cheeses and headed out on the I-95 with a promise to extend our egalitarianism to the wheel: my husband started us off and I was to take over midway.

Here’s my shameless admission: I lasted for three hours before I loudly threatened death to us all if I stayed another minute at the wheel. Picture a long, monotonous road; all topics of conversation and gossip quickly evaporated; a rotation of John Legend’s “All of Me” (my daughter’s favorite), Imagine Dragons’ “Radioactive” (my son’s favorite), and Elton John (the adults’ favorite). Picture aching legs and backs and a sleepless night. At one point, I realized that perhaps, the utterly ludicrous thing my father prophesied five years ago could come true — now, on the road:

“She will kill herself and her children,” my father told my mother, when she revealed to him that I was getting my license — the first women in my extended family to do so. I had recently moved out of Kiryas Joel and was ready to chart my own path in life.

Unlike many women who take to the wheel as soon as the legal age allows for it, I first sat in the driver’s seat at the age of 23. You see, Satmar Hasidic women are prohibited from driving a car. There are some don’t-ask-don’t-flaunt-it loopholes for women who married into Satmar, but it’s often unclear who is privy to this exclusive treatment and why. However, in Kiryas Joel, the epicenter of Satmar Hasidim, you will not see a single woman in the driver’s seat. It is strictly prohibited, and anyone who dares to defy this rule will be expelled from the community.

This is not specific to Satmar. Women in New Square cannot drive cars either, and other smaller Hasidic sects only begrudgingly allow their women to drive, cautioning them to stay away from their yeshivas so that other parents do not follow their lead.

Tznius (modesty) is what we were taught is at stake when a woman drives a car. But I believe there’s something else. Driving gives you the keys to freedom and independence; it opens the road to opportunities beyond grocery and hosiery shopping. For Satmar women to be banned from the wheel means being tied to their husbands and to their communities, bags and kids at their feet, waiting for a cab — just the way misogynistic and paranoid men like it.

I remember my first long-distance drive to New York City with two female friends from Kiryas Joel. I had borrowed a friend’s GPS and headed onto the road, confident yet cautious. It was dark by the time we drove home, not the ideal time for a new driver to be on the road. I missed the exit and continued driving aimlessly, waiting for the distressed GPS to reroute. While chatting and wiping beads of sweat off my forehead, I found myself in oncoming traffic, cars whizzing by me at 70 miles per hour.

I froze. I saw my father pointing an accusatory finger at me. I saw death.

Five minutes later, after honking and blinking my headlights furiously, the cars came to a standstill to allow me to turn around and back out of the mess.

My driving has been relatively uneventful since. A few fender benders here and there, but my children and I are still alive and well.

Finding myself on the road for the longest trip of my life, and feeling the pressure of contributing equally to the drive yet not coming through in the end, I reflected on the irony of it all: the unequal team effort, my husband having the physical stamina to drive for 10 hours while I collapsed at three, and the desire to be banned from the wheel just like the old days.

In the end, we didn’t kill each other, and we did enjoy the scenic views of the sun peering over the Carolinia fields.

But we won’t be road-tripping again. Not so soon anyway.