Q&A With the Co-Creator of Feminist Phone Intervention 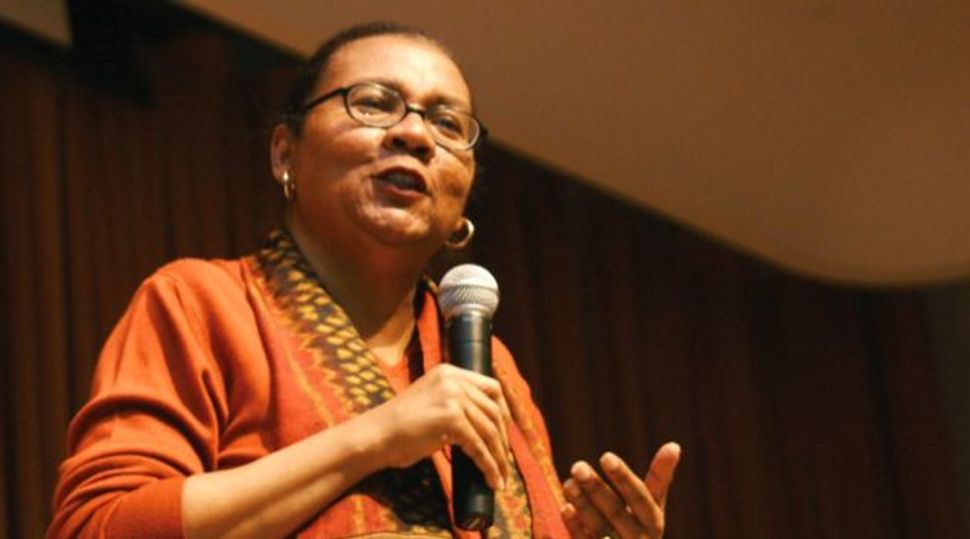 Aggressive men in bars, get ready to have your minds opened by feminist texts. An anonymous radical activist pair has started a project called the “feminist phone intervention.” How it works? Essentially, it’s a hotline that’s also a fake number. If someone asks for a woman’s digits too aggressively, she can offer this number instead, and any texts or calls sent to the number will receive a randomly-generated quote from feminist thinker bell hooks in response. As the site says, “protect your privacy while dropping some feminist knowledge when your unwanted ‘suitor’ calls or texts.“

The Sisterhood’s Sarah Seltzer conducted a Q+A with one of the two Jewish feminists who set up the hotline, which is soon to go open-source so it can be used internationally. She refers to herself as a “Bronx-born Latina activist researching the history of the US radical press, especially the Yiddish anarchist newspapers” and is thrilled with the response her project is getting. “I hope that this rather modest project will offer another simple option for talking back to the sexism of everyday life,” she said.

Sarah Seltzer: What specifically in current events precipitated the idea? Was it the #YESallwomen discussion that arose in the wake of Elliot Rodger?

After the Elliot Rodger murders, the NYPost printed bikini photos of the woman who “spurned” him, although she was only ten years old when they met. The idea that women are sometimes held responsible for the violence committed against us — and that people might sympathize with the murderer because he was “rejected” — is nauseating and enraging. Plus, none of this is new. I am also reminded of David Richard Berkowitz, aka “Son of Sam,” the mass-murderer in the summer of 1976 who said he killed women because they wouldn’t date him.

What about events in your personal life?

One evening on my travels in Istanbul, a huge man assaulted me from behind. I spun around and pinned him to the side of a building, holding his hands and shoulders back, my adrenaline surging. But then what? I could neither take a swing at him nor call the cops. I couldn’t even take for granted that he would be recognized as wrong. So I was just suspended there, pinning him against the wall, yelling at him: “You need to learn to respect women! What you did is violent!” And he was just looking at me in complete surprise and disbelief. The attack occurred in front of an instrument shop, and some musicians invited me inside and treated me gently but they also told me to forget about it while I was still furious.

I have continued thinking about that moment. I feel like too often, we’re stuck within that same feeling of suspension — does anyone have my back? Will I be believed, will I be supported? How can I talk back, productively and safely? Will I be considered culpable for “provoking” him, if violence is committed against me?

Most women, genderqueer, and feminine-presenting people have similar stories; it’s common as rain.

Since you launched the project, have you gotten any interesting complaints from men yet?

No, I haven’t received any complaints yet. One man did ask if this would be “used to punish men who haven’t done anything wrong.” I feel that we can trust people to assess their own situation. Personally I don’t think getting a quotation from bell hooks is any kind of punishment for dodgy behavior!

What has the response been so far from users? Any numbers of how many have used it?

We’ve had thousands of calls and texts in the past 24 hours! I think folks are so excited about this because it acknowledges our usually-private feelings of exhaustion and anxiety when dealing with strangers. Why waste your time and your breath, when you can have bell hooks “screen” your calls?

I love other feminist intervention projects that take up public space, like the Stop Telling Women to Smile poster campaign. Aesthetics and creativity are incredibly important in activism. We need to keep developing creative responses to sexism.

How many quotations do you have on file to send out via texts. Are any from Jewish feminists?

Well, at the moment we are only using a selection of bell hooks quotations, but I am happy to mention one of my favorite Jewish feminist inspirations. In my work, I’m very inspired by Emma Goldman, along with the many other Jewish anarchists and labor radicals who built a mass movement with a tremendously creative and literary Yiddish press. Goldman’s insistence on the importance of women’s autonomy in everyday life is still quite revolutionary, I think. She understood that any movement that aims to abolish systematic oppression must create a powerful social culture and reorder the very ways of being together in common space. (This is also one of the things that I felt most powerfully and remember most hopefully from Occupy Wall Street, Occupy Cal and Occupy Oakland.) The active cultivation of comradeship and connection is an important act of resistance to alienation and fear.

Q&A With the Co-Creator of Feminist Phone Intervention