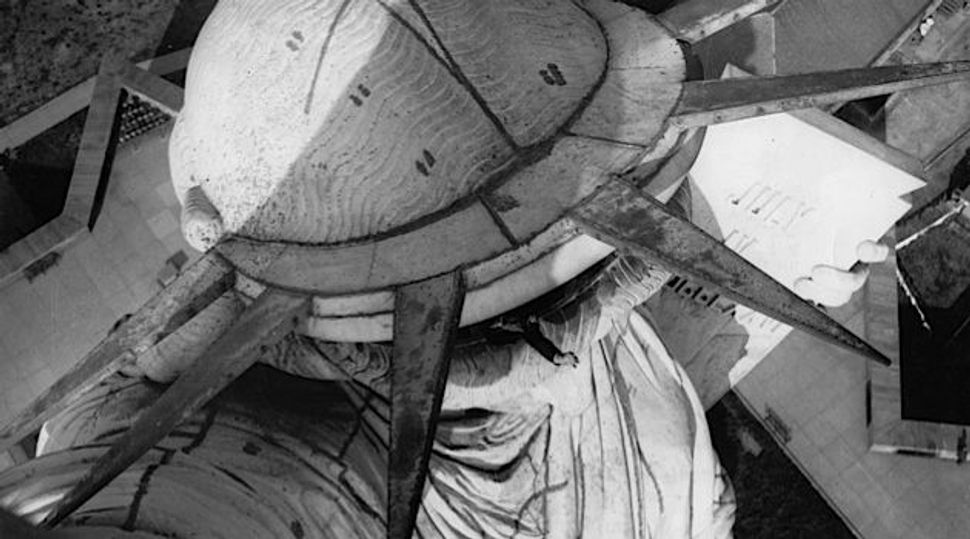 The Statue of Liberty in 1936. International News / Forward Association

With her right arm raised heavenward, it’s easy to imagine that the Statue of Liberty, built in 1886, stands in mid-harbor, vowing to remember Jerusalem, lest her right hand wither. In truth, Lady Liberty is not technically a Jew. Her father was a Freemason; the sculptor Frederic Auguste Bartholdi called her “Libertas” after the Roman goddess of freedom. He also wanted her to resemble the goddess Isis, the Egyptian queen of heaven, hence the crown of sunbeams.

Bartholdi was helped by fellow French artists Gustave Eiffel and Eugene Viollet-le-Duc who assisted with Lady Liberty’s inner foundation construction. Perhaps it’s her long term domestic partnership with acclaimed Sephardic Jewish New York City poet and activist Emma Lazarus, (or at least with her sonnet “The New Colossus”) that makes Lady Liberty seem like a philo-Semite. And Lazarus wouldn’t have been the first American Jew mesmerized by her spiritual largesse.

The froy mitn fakl as she’s sometimes nicknamed in Yiddish, “the woman with the torch,” inspired German Jewish refugee immigrant Manfred Anson’s menorah with each branch and the shamash a tribute to her. Lady Liberty’s folded robes and sandals, evoke a reimagining of the early practical, but still fashion-forward Israelite look during the 40 years of biblical wandering. Her zaftig figure, bottle curls, ample lips and nose, her sturdy, heymish interior beckoning you in, along with her serious dedication to mentshlekhkayt un gerekhtekayt — “humanity and justice” — her task of enlightening the world, all seem like a familiar package. She doesn’t have a weight problem, she comes from solid stock. And coupled with the Lazarus poem naming her “mother of exiles” she offers to all a tower of female strength. A Jewish mother for the tempest tossed. With her own set of broken chains lying at her feet, she identifies with you, and the troubles you’ve seen. She is a confident multi-tasker, providing a watchful eye and a warm welcome.

On a June morning in 1882, several years before there was a Statue of Liberty in New York’s harbor, and a year prior to the creation of Lazarus’ sonnet, a young Jewish immigrant surveyed his new environment. Here’s how Ab Cahan, editor of the Forverts having escaped Russia’s secret police and a likely exile in Siberia, recalled in his memoirs the diverse city Lady Liberty would soon look over:

‘Here on Delancey Street, on the other side of the Jewish neighborhood, the population was also quite a melange. A lots of German and Irish lived there. On Grand Street there were two cafes, one owned by a German and the other by a Frenchman. No Jewish cafes or restaurants were found here. On Grand Street, between Allen and Orchard, there was a famous department store, Ridley’s, where Americans from all parts of New York come to shop. On Grand Street, near Allen, was Lord &Taylor, now better known for its 5th Avenue address. On Hester Street Jewish tailors gathered waiting for the contractor bosses to hire them. A few years earlier, Hester Street was mostly German and Irish. It seems Paris and London change not a bit. New York is constantly changing.

A century since Edison filmed her, she’s still looking great, but she’s aging amidst New York’s changes. And while independent, having survived a hurricane in her harbor, we worry that she needs our protection. To that end, it’s reported that Israeli technology provides a unique system of security cameras around her.