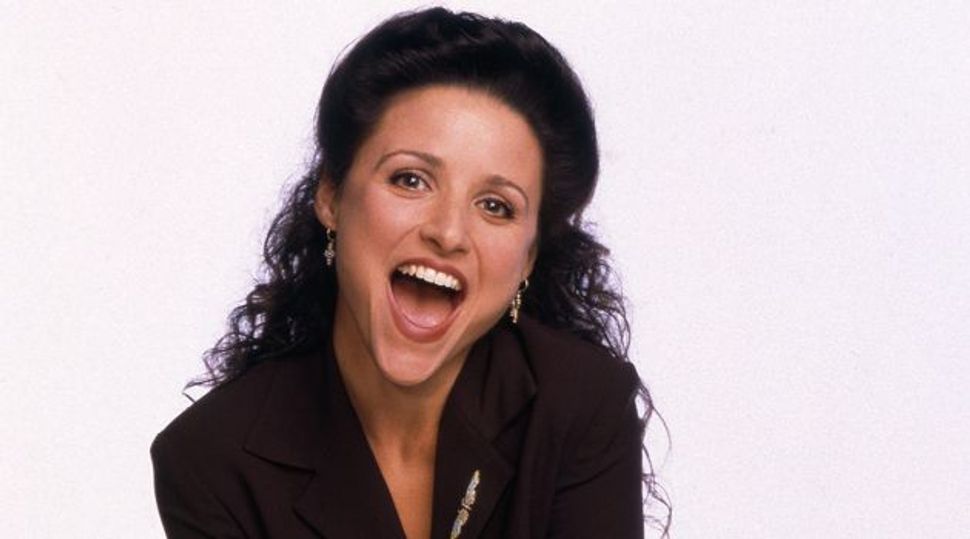 This week marks the 25th anniversary of Seinfeld, the mostly loved but sometimes reviled sitcom about nothing. In honor of this milestone, the Sisterhood would like to pay our dues to the character of Elaine Benes, whose spunk and guile was given shape by the most enduring cast member, Julia Louis-Dreyfuss. Elaine was an unlikely shero for the generation of women who grew up on the show and today, as we look back, it feels fair to crown her as an official feminist icon. Here are five reasons why.

She had it. She liked it. She didn’t make a big deal of it. Unlike many female television characters, Elaine didn’t fall into the slut or prude category. She wasn’t all lust and one-night stands nor was she a hopeless romantic searching for Mr. Right. Memorable episodes illustrating Elaine’s modern approach to female sexuality include: “The Sponge,” in which she learns that her favorite birth control method has been discontinued, and then decides to date men based on whether they are “sponge-worthy”; “The Contest,” in which the three main male characters bet on who can go the longest without masturbating and Elaine insists that she should be part of the competition and then loses; “The Deal,” in which Jerry and Elaine explore the possibility of maintaining a relationship of being friends with benefits.

With her floral dresses, shoulder-padded blazers and granny shoes with socks, Elaine worked a look that was both feminine and tough. As Louis-Dreyfuss told the New York Times “It wasn’t about trying to look sexy. It was about looking like a girl who pushes people around.” Elaine dressed like a mature, confident woman who wasn’t overly concerned about the male gaze. No wonder then that her look continues to inspire imitators in the hippest precincts of New York City.

Elaine didn’t act like finding a husband was her primary goal. Working, dating and hanging out with her friends all appeared to be more important to her that getting hitched. This isn’t to say it wasn’t on her in mind. In “The Postponment” Elaine admits that she is jealous of George because of his engagement to Susan and feels especially bad about the fact that he is marrying before her because she thinks he is a loser. But these moments of insecurity only made her more realistic and relatable.

4) She wasn’t even supposed to be there

According to the commentary on the Season 1 “Seinfeld” DVD set, NBC executives worried that the show was too male and made Jerry Seinfeld and Larry David add a woman to the cast. Now of course most of us viewers did not know this at the time, but the fact that an icon, and the most successful Seinfeld alumni to date, was born out of affirmative action makes her presence all the better.

The abiding critique of “Seinfeld” is about how narcissistic and self-centered the characters were. Whether the show was an endorsement or a critique of such behavior is up for debate. But in the context of Elaine it is important to note the very difference between a selfish man and a selfish woman. A selfish man is to be expected, while a selfish woman is a radical departure from everything women were traditionally taught to be: caregivers, nurturers, mothers and doting wives. Seeing a Elaine live for herself was a real inspiration to women looking to shed the whole “living for others” thing.