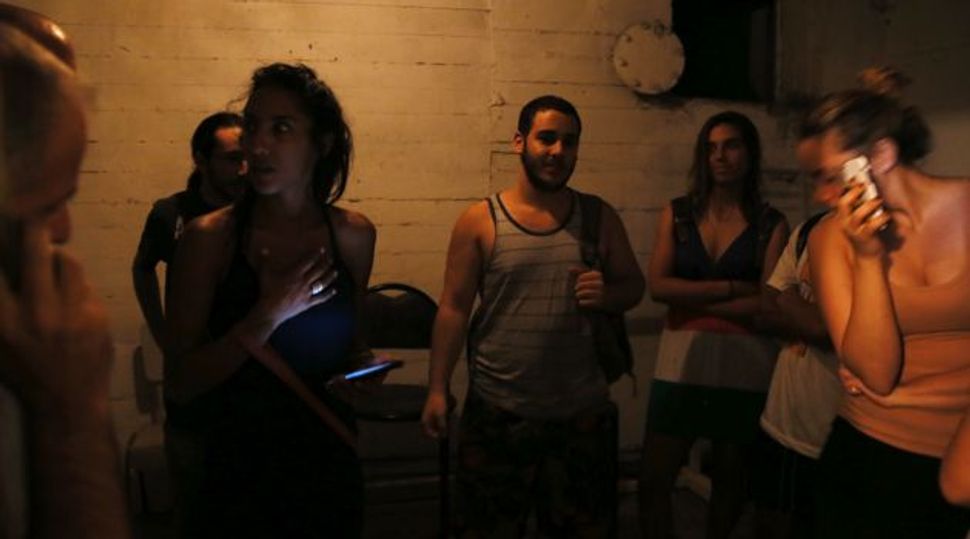 Getty Images // There was gender mixing in this shelter in Tel Aviv, unlike one in Ashdod.

While people all around Israel have spent the past two weeks scrambling for cover during rocket attacks, it seems that in some places, only men’s lives are considered worth protecting. In the Ashdod rabbinate building, the bomb shelter has a sign on it reading “For men only,” and women who happened to be in the rabbinate during recent raids were not allowed into the bomb shelter. Thus reports MK Stav Shaffir, whose staffer happened to be at the rabbinate this week when all this was taking place.

Orit, an Ashdod resident who was also in the rabbinate this week with her husband, told Yediot Ahronot about the “insult of trying to impose gender segregation on us even at times like this,” and her shocked discovery that the “women’s” shelter was just a regular room, with windows and plaster walls and no indications of protection from rocket attacks. Her husband added that gender segregation has reached “insane proportions, and are now at the point of risking women’s lives. The rabbinate is basically saying that it’s important to them to save men’s lives, but women can die or pray or hope for a miracle. It’s just unbelievable”.

Ashdod, a city of 212,000 20 kilometers north of Gaza, is in direct reach of Hamas Grad rockets, and has been incessantly hit in this last round of attacks from Gaza. A gas station in Ashdod sustained heavy fire in one rocket; another rocket directly hit a six-unit housing block. Over 1000 rockets have flown into Israel during this latest round of conflict.

In response to women’s exclusion from the bomb shelter in the Ashdod rabbinate, MK Stav Shaffir filed an urgent complaint with the Religious Affairs Ministry, demanding to put an immediate halt to the segregation. “The idea that women seeking shelter from a rocket barrage are met with a closed door is untenable,” she told Yediot. “Discrimination against women is unacceptable under any circumstances, but when this discrimination prevents women from protecting themselves, it’s not only unacceptable but also dangerous.” Apparently the administration of the rabbinic courts was unaware of the exclusion, and responded to Shaffir’s query with embarrassment. “It was a local initiative of an employee acting without formal authority,” they responded. “The rabbinical court views such attempts at gender segregation in a very severe light and will take serious actions against those involved.”

I suppose the rabbinic court’s attempt to distance itself from this series of events is a good thing. After all, that means that there exist some voices of reason and sanity even within the growing gender-extremism in the religious Jewish world. On the other hand, the fact that someone somewhere thought that it was okay and normal to put a “Men Only” sign on a bomb shelter is in an indication of deeply entrenched misogyny. It seems like it’s almost a knee-jerk reaction for some people to simply create “Men Only” spaces, as if this is natural and normal and perhaps even expected, to such an extent that no consideration is given whatsoever to real lives of women, to the actual consequences and implications of not allowing certain people into safety. This problem of gender-based religious extremism has been going on for a while — too long — and has clearly created disturbing practices that are spread with complete thoughtlessness.

It is that thoughtlessness that worries me most. Because when these awful practices become so entrenched that even little bureaucrats think that it’s their job to spread those practices without any thinking at all about the meaning and consequences for real people’s lives, then our society is really in trouble. This story seems like one more indication that this kind of thoughtless religious misogyny has taken serious hold in some places. I might even say that this reality is more frightening to me than falling rockets.