The Complete History of the Sheitel 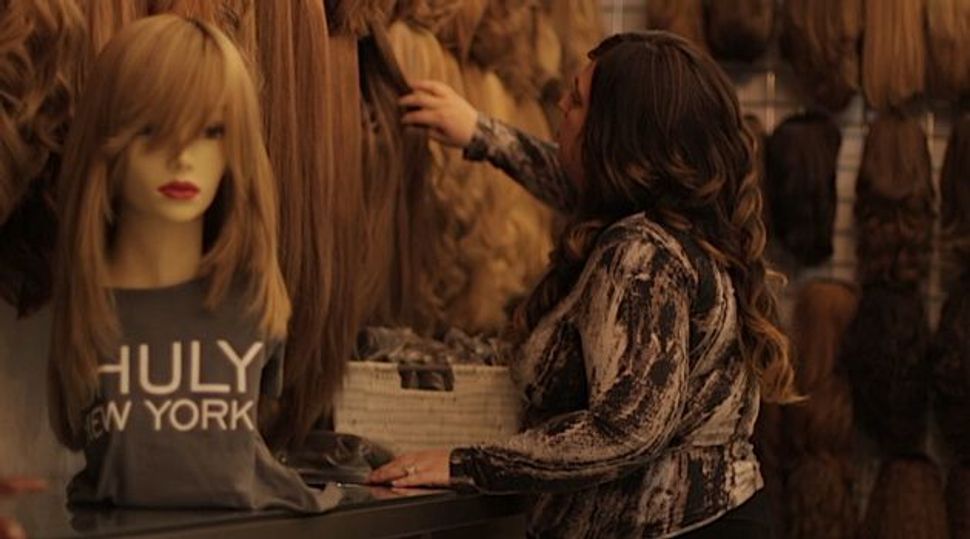 The sole purpose of Taxonomy of the Sheitel was to inform you, dear perplexed reader, of the various Orthodox wigs and what each signifies. The intention was not to opine on the reasoning behind wigs and its relevance today.

However, as was expressed in the vibrant comments section of the article, readers wished to know more about the history of wigs: whether or not women wore wigs in biblical times (not to be confused with Talmudic times), and why it is common practice among pious women to cover their own hair with someone else’s natural-looking hair. Doesn’t it defeat the entire perceived premise of the Halacha, modesty? What about the issue of misogyny, the feminist asks? Isn’t it a form of patriarchal control to demand that a woman cover her hair, and what more, because this sensual part of her body is to be kept for her husband’s eyes only? And do all Orthodox and/or Hasidic women shave their heads and don a wig?

The short answers are: There is no evidence that women wore wigs during biblical times. The Halacha is not completely clear on the reasoning, outside of stating that hair on a married woman is considered nakedness and therefore, naturally, needs to be covered up. While debatable and indeed the subject of much controversy, we feel that a woman cannot be considered controlled unless she herself feels she is being controlled. And no, most Orthodox women do not shave their heads; only a select few Hasidic sects, like Satmar and Skver, require married women to shave their heads. Even then, many women covertly grow their own hair, defying their community standards and risking expulsion.

And now for the longer answer:

The Bible mentions women’s hair (e.g., Songs 4:1 “thy hair is as a flock of goats, that trail down from mount Gilead”), but is short on references to women covering their hair, and doesn’t mention wigs at all. Ruth’s mitpahat, a garment that means kerchief in modern Hebrew, is mentioned when she is asked to spread it as a bag to accept a gift of grain from Boaz (Ruth 3:15).

In Exodus 12:35-36 the Israelites ask and receive gold, silver and clothing from the Egyptians. We know from the rich store of archaeological finds that the ancient Egyptians wore wigs – men and women alike – over their shaved heads. It is therefore possible that wigs were included in semalot, their garments, but the Bible is silent on this point, and any surmising is pure conjecture.

In the time of the Mishnah and Talmud, the established norm was for married women to cover their hair. This is discussed directly or in passing in many places. From a much-discussed passage concerning the Sotah (a woman suspected by her husband of adultery and subjected to a trial-by-ordeal conducted by priests) ,the Talmud deduced that it was the norm for a woman to cover her hair in biblical times. In the procedure described in Numbers 5, the Sotah’s hair is undone (or uncovered), and from here it is seen that her hair was normally covered. Whether or not this reconstruction is historically accurate, the Mishnah on Ketubbot 72a proclaims that hair covering is not actually required by the Torah itself, but is rather a Jewish minhag, or custom, which evolved over time into a de facto law.

The Talmud has more things to say about hair covering: for example, that a man even has a right to divorce his wife if she appears on the street with an uncovered head. “Hair on a woman is ervah (nakedness, impropriety),” Rav Sheshet declares, citing the erotic imagery of the verse from Song of Songs mentioned above. Hair therefore needs to be covered. The precise contours and origin of this Halacha remains a hot-button issue to this day. There are those who argue for leniency, based on the aforementioned Mishnah, which says the practice is Jewish custom (dat yehudit) rather than Jewish law (dat Moshe).

During the post-Talmudic period, Jewish women generally covered their hair with a cloth or a veil. In the 16th century, coinciding with the appearance of wigs as a fashionable accoutrement at European courts, some women began wearing wigs, and rabbis at the time were asked whether a wig is halachically permissible.

Some concluded that it was, based on the Talmud, which speaks of peah nachrit, a wig, in one case designating a wig-wearing woman as “righteous,” (Arakhin 7b). Others concluded that even a wig required further covering.

Wigs continued to gain in popularity among Jews in the 18th century. Some rabbis continued to permit the use of it, while others were against it, claiming that the wig itself was covered in these early Talmudic sources, and that a wig fashioned from human hair did not suffice as a hair covering.

In the early modern Europe, wigs were fashionable – think Marie Antoinette. But fashions come and go, and in the 19th century, trendy European women no longer wore wigs. As modernization crept into the ghettos, many Jewish women did not cover their hair altogether. In some traditional circles hair covering was maintained, and even really frum (pious) women wore wigs. They did this according to the allowance by some rabbis mentioned before. It is in this period when the sheitel, the wig, came to be identified with Jewish women.

At the same time as wigs were becoming a particularly Jewish form of dress, there was still some of the old halachic and moralistic opposition to wigs by some rabbis. In his will, for example, the Hatam Sofer (1762-1839), one of the leading Orthodox rabbis of the 19th century, forbids the women in his family to wear wigs. Most rabbis, however, accepted wigs as sufficient hair coverings for women.

In America in the 20th century, the sheitel became an identity divider between women of various degrees of observance. Only ultra-Orthodox women, and some older “regular Orthodox” women wore wigs. By the mid-century, modern observant women simply didn’t cover their hair anymore. This trend continued from Europe where uncovered hair had become so commonplace in even traditional circles, that a great Lithuanian rabbi had ruled that it was no longer prohibited to say the shema prayer in front of a woman with her uncovered hair, as is stated in the Talmud, because uncovered hair was so common that it could not be considered nakedness for all intents and purposes. In American Orthodox synagogues, this was the era of the doily box.

But toward the end of the 20th century, and continuing into today, most Orthodox women cover their hair, and lots of American women who think of themselves as Modern Orthodox cover as well. Most wear sheitels. Among the reasons for this shift may be the pervasive drift to the right as well as the ability to produce beautiful, natural-looking wigs.

There are many, especially Hasidic rabbis today who are against wigs, specifically the natural-looking long wigs. They view them as a second-rate form of head covering, and often cite the Hatam Sofer and other stringent rabbinic views. But in Lubavitch, the Hasidic sect also known as Chabad, wigs are first-rate, because the late Lubavitcher Rebbe said that if a woman wore a hat or scarf she might be tempted to remove it, but no one would remove a sheitel in public. Other ultra-Orthodox rabbis choose to disdain wigs which are long or, frankly, look too good.

Now that we have established the history of wigs, let’s have a closer look at prevailing attitudes among contemporary wig wearers. Married Orthodox women across the world cover their hair. How do they feel about it?

As we have gleaned from many of the comments on the article as well as on social media and beyond, women who cover their hair embrace the custom. They typically do not feel oppressed by men (who are those men anyway? the writers of the Talmud?). Many women find meaning in this custom, as the women in the video suggested, whether or not this meaning was intended by the Talmudic or later rabbis. Some women in Modern Orthodox communities don’t cover their hair altogether. A fairly common practice among Israeli women is to cover their hair with scarves and hats, but not wigs, to satisfy this Halacha. Others make a decision not to adhere to this custom for religious or personal reasons.

Whether it’s because their mothers, relatives and friends do it and they are expected to continue the tradition, whether it’s out of their own volition, or because they wish to honor this Halacha – the majority of women who wear wigs embrace it. Whether or not wigs were worn in biblical times, whether they were fancy in French royal courts, frowned upon in Central European rabbis’ homes, or ubiquitous on the heads of shtetl matriarchs, today they’re an indispensable part of many Orthodox women’s wardrobe.

Shimon Steinmetz is a historian and researcher who lives in Brooklyn. Frimet Goldberger is a freelance writer and frequent contributor to the Forward.

The Complete History of the Sheitel